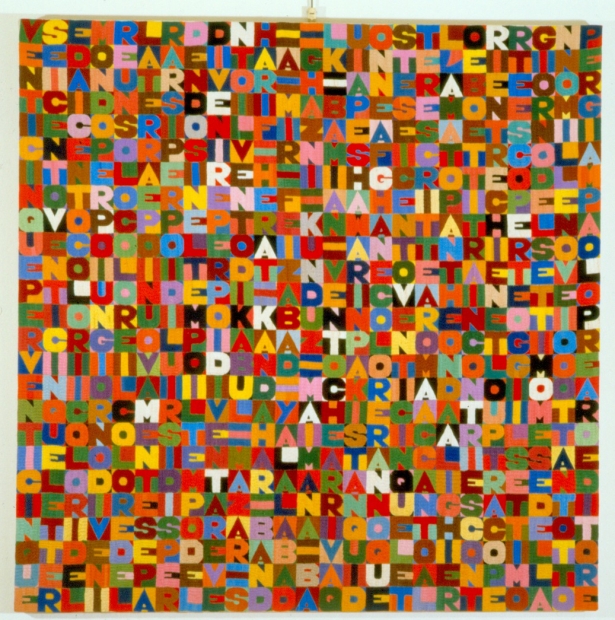 Alighiero Boetti was one of the most important artists associated with the Italian Arte Povera movement. Boetti sought to subvert traditional notions of authorship, dubbing himself “Alighiero e Boetti” (implying a partnership by adding “and” between his first and last names), as well as pioneering collaborative relationships with the fabricators of his work. He is perhaps best known for making embroidered works that feature words, numbers, and maps. These works, which first emerged in the 1970s, addressed a new sense of internationalism and global systems of power and authority as represented by flags, symbols, national borders, and language.

Like many artists of his generation, Boetti was interested in the relationship between, on the one hand, control and rational thought and, on the other, chance and authorship. In the 1970s, Boetti traveled to Afghanistan, where he met women from an embroidery school who he commissioned to create his first map work, a series he would continue for a decade. The embroiderers chose the colors and patterns of the work, and Boetti embraced the chance element that resulted from their decisions. In the 1980s, Boetti expanded his imagery from maps to focus on language play and a kind of poetry of time and space. The resulting textile works, of which Today on the Seventh Day of the Seventh Month of the Year Nineteen Hundred Eighty-Eight … Giampaolo Prearo Editor is a superlative example, create fields of numbers and letters that forms words and even equations while also creating visually arresting patterns of color and form.

This acquisition brings into the museum’s collection a prominent twentieth-century artist, whose influence on contemporary art has been palpable in the last decade. Boetti’s original approach to conceptually driven textile work ties in with works in the collection by Françoise Grossen, Robert Rohm, and Josh Faught.