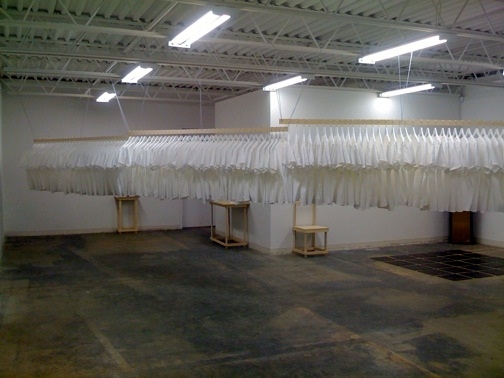 Conceptually driven, Andrew Witkin’s artistic approach is both inspired by and nearly indistinguishable from his deliberate approach to life, work, and relationships. Witkin explains that his work “is and is not art, is and is not finished.” Though his projects have taken a wide range of formats, from large installations to more discrete objects, they all show his interest in repetition and open-endedness.

Untitled consists of 144 white T-shirts hung on hangers. The scene is a familiar one: a sea of mass-produced shirts, as you might see in a clothing store. Written in black on each shirt are short texts—quotes from authors and artists, a single word, or a terse phrase. They range from provocative (“something must happen”), ho-hum (“photos of friends”), and melancholic (“seeing a homeless man every day for weeks on beacon hill and then from one time on, he is gone”) to jovial (“hahahahahahaahahahahahahahah”). As viewers walk through the installation, their upper bodies are obscured by the hanging T-shirts and only their legs are visible, as if their individuality were masked by the shirts. The listing of collaborators, who include colleagues, friends, family, artists, and various cultural figures, is integral to Witkin’s work and further blurs the distinction between his artistic practice and his everyday life.

Witkin was the recipient of the 2008 James and Audrey Foster Prize, and as such, his work was exhibited at the ICA/Boston that year alongside that of the three finalists. Untitled presents a significant large-scale work by a young, Boston-based artist and joins works in the collection by Laylah Ali, Ambreen Butt, Taylor Davis, Kelly Sherman, and Rachel Perry. Furthermore, the repetitive and transformative use of everyday materials in Witkin’s work has a counterpart in Tara Donovan’s sculptures in the ICA’s collection.

The 2008 James and Audrey Foster prize