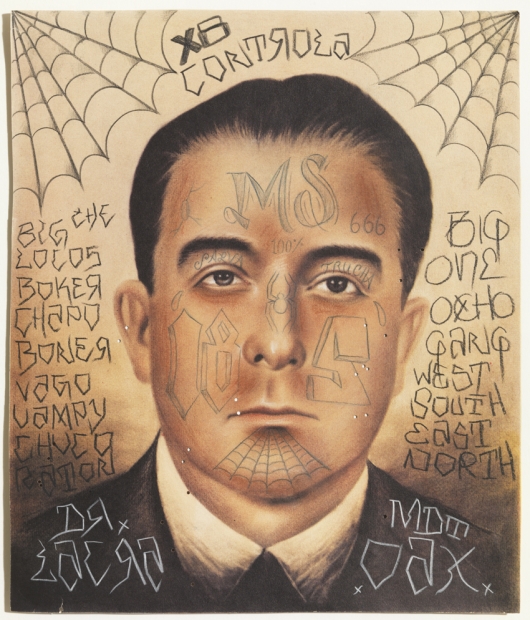 In his works on paper, tattoo artist Dr. Lakra transforms found prints, advertisements, and objects. His work is often tinged with gothic overtones, as he adds morbid symbols to the found imagery. Spiders and snakes, blood stains and skeletons, sneak onto the pages of his unsuspecting subjects.

This untitled portrait shows an unidentified man wearing a black suit coat and white dress shirt; his hair is slicked back neatly in place. He stares ahead with a direct and vacant gaze, as if posing for a passport or visa application. Opaque though he is, many of the symbols found in the image hint at a potentially violent history. Spider webs fill the upper corners of the picture and creep onto his chin, as if he were metaphorically caught in an inescapable situation. The number 666 is scrawled on his forehead, a reference to satanic practices, and tears drip down both cheeks, signifying that he may have killed someone while serving time in prison. The initials “MS” on his forehead and the word “Salvatrucha” across his eyelids signal an affiliation with the infamous Salvadoran gang Mara Salvatrucha, a powerful transnational group that originated in Los Angeles and now has members all over the world. The inscriptions “Big One Ocho,” to the right of his head, and “18 S,” across his cheeks, refer to the Hispanic LA–based 18th Street gang. Dr. Lakra stresses the importance of territory to gangs by listing the cardinal directions. At the bottom of the page, to the right of his prominent signature, he has inserted “OAX” in reference to his hometown of Oaxaca, Mexico.

This portrait appeared in a solo exhibition of Dr. Lakra’s work presented by ICA/Boston in 2010. Enhancing the collection’s strength in figurative work, it complements the populist and street-culture references found in collection works by Shepard Fairey and Swoon.