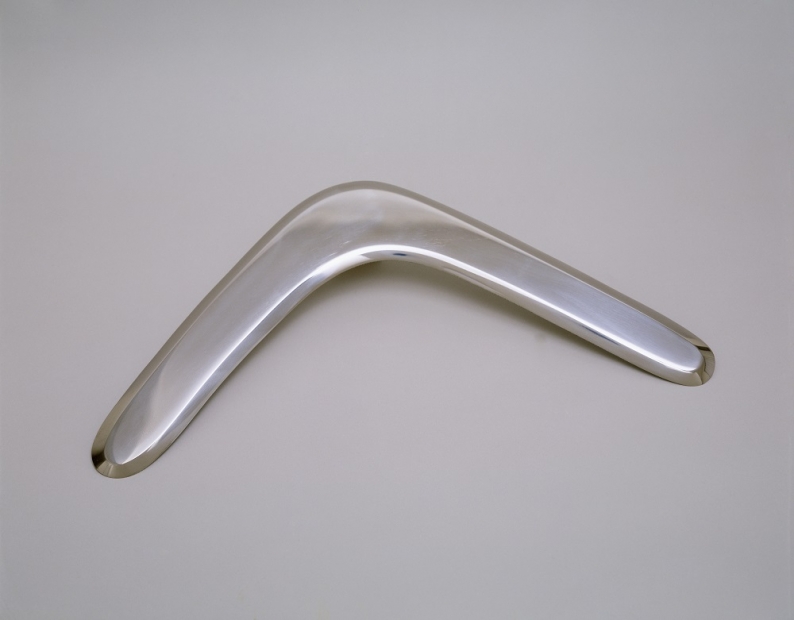 For thirty years, London-based Palestinian Mona Hatoum has produced work that treads the line between the familiar and the uncanny via the body and the objects it comes into contact with. During the late 1980s, she moved from performance and video to large-scale sculptures and installations in which household items—kitchen utensils, rugs, cots, and tools—become threatening and aggressive. Objects that initially remind one of the comforts of “home” turn ominous, an alienation evoking the experience of exile, displacement, and conflict.

Do unto others… is a polished metal boomerang put on formal display in the gallery context. The boomerang originated in Australia as a tool for hunting as well as sport and entertainment. Hatoum’s gleaming sculpture eschews the warm organic wood typical of boomerangs in favor of surgical stainless steel, a material change that lends the object the appearance of a blade, scalpel, or scythe. The title refers to the golden rule “Do unto others as you would have them do unto you.” When thrown, a boomerang performs the operation detailed by the maxim by returning to the thrower’s hand. However, to catch this blade-like version of the boomerang would undoubtedly cause harm to the wielder. With Do unto others… Hatoum seems to suggest a negative invocation of the “golden rule,” a reading more akin to “an eye for an eye,” in which violent acts, and not good deeds, are reciprocated.

This work forms part of the ICA/Boston’s strong and growing collection of sculpture, as well as the constellation of works that investigate themes of war and violence, including examples by artists such as Kader Attia, Louise Bourgeois, Willie Doherty, and Yasumasa Morimura.