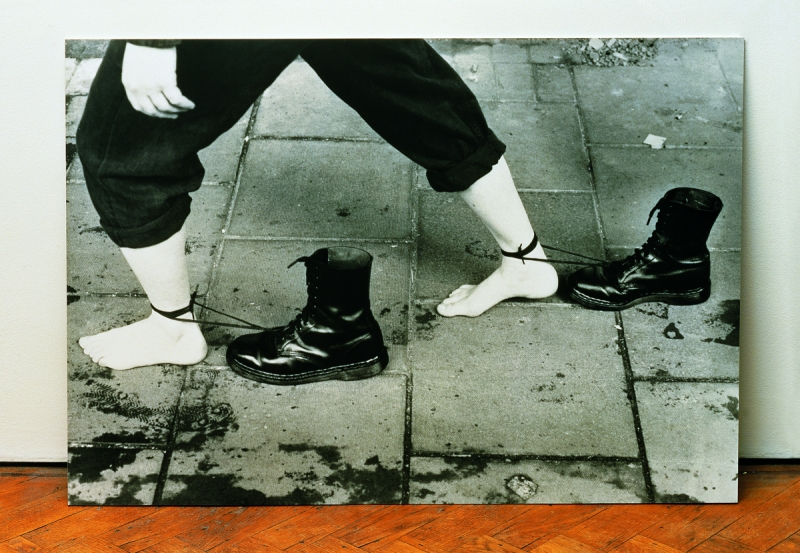 Working in sculpture, photography, performance, and video, Mona Hatoum—like her peers Robert Gober, Felix Gonzalez-Torres, Doris Salcedo, and Rachel Whiteread—defamiliarizes ordinary domestic objects and transforms them into minimalist, conceptual, and performative art objects. Corrupting the essential features and functions of items such as kitchen utensils or household furniture, she infuses benign forms with the capacity to harm. Hatoum engages viewers’ tactile imagination, provoking them to imagine their own bodies responding to these newly aggressive objects. The multiple and often contradictory allusions contrast the comfort and safety provided by the domestic realm with the history of violent conflict in the London-based Palestinian artist’s homeland.

This photograph documents an early performance during which the artist trudged barefoot through the streets of Brixton—an ethnically diverse, working-class suburb of London—dragging heavy, black Dr. Marten boots tied to her ankles. This particular style of boots was worn by both the British police and skinheads, overt opponents during the racially charged history of early 1980s London. Hatoum’s bare feet allude to the vulnerability of ethnic minorities in face of the violence and discrimination of a public authority charged with community protection.

Performance Still is part of a significant grouping of works by Hatoum at the ICA/Boston, and it engages with other many other works that explore performance, such as those by Ragnar Kjartansson, Yasumasa Morimura, and Cindy Sherman.