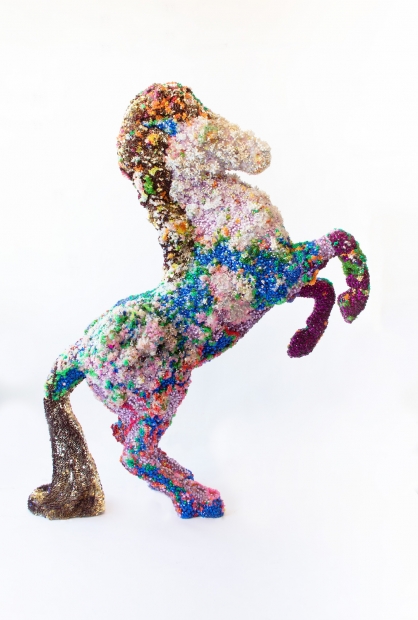 The Fable, which is composed of wonders, moves the more

The multifaceted practice of New York-based interdisciplinary artist, performer, and musician Raúl de Nieves ranges from stained glass-style narrative paintings, to energetic performances, to densely adorned figurative sculptures, which are encrusted with bangles, beads, bells, sequins, and other homespun materials. These opulent, joyful sculptures reference traditional costumes from Mexican cultures and modes of dress, from drag, ballroom, and queer club cultures, while also evoking religious processional attire and the outfits worn by circus performers. All of his works share a distinctive visual language that draws from Mexican craft traditions, religious iconography, mythology, and folktales to explore the transformational possibilities of adornment and the mutability of sexuality and identity.

The Fable, which is composed of wonders, moves the more represents a turning point in de Nieves’s practice: for the first time, he has made a life-size, freestanding, figurative sculpture of an animal. De Nieves constructed the work through the same accumulative, labor-intensive sculptural process that the artist often employs in his practice, in which layer upon layer of beads, bells, sequins, and other readily available materials are built up to create a riotously colorful and symbolically expressive object. As well as drawing on the recurrent motif of animals in his work, de Nieves repeatedly returns to the legend of Saint George and the Dragon, in which the saint, mounted on horseback slays a dragon who is terrorizing a village by demanding constant tributes. Evoking fables—the literary genre in which animals are often anthropomorphized to illustrate a lesson, as well as the genre by which philosophers often explored ideas of wonder and morality—The Fable … expands the artist’s inventive adaptation of iconographic traditions in a vibrant amalgamation of form and material.

Acquired through the generosity of an anonymous donor 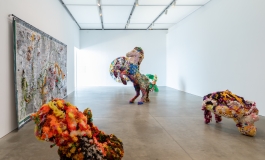