The ICA will reopen with Member Appreciation Days on July 14–15 and free admission for the public July 16–19. Advance tickets required. Learn more about our new safety protocols and visitor guidelines and what visitors need to know before they arrive. 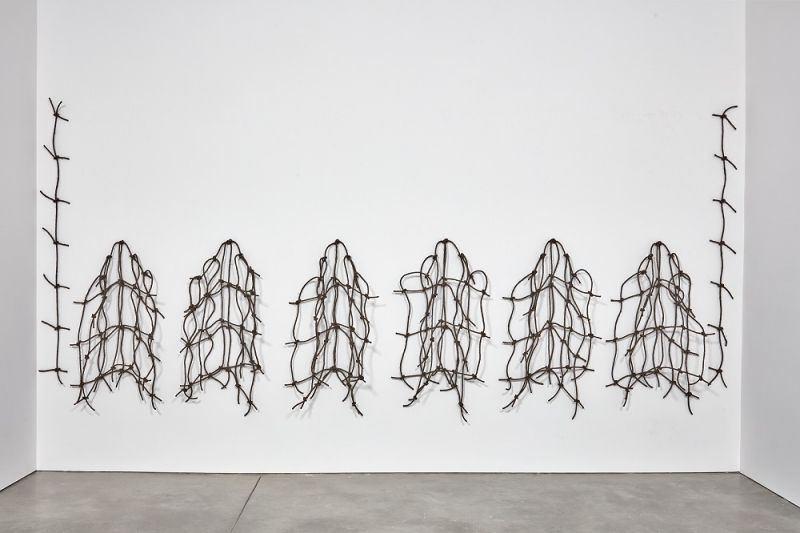 In 1969, Robert Rohm’s manila rope reliefs were included in three important group exhibitions: Lucy Lippard’s 557, 087 at the World’s Fair Pavilion in Seattle; Marcia Tucker and James Monte’s Anti-Illusion: Procedures/Materials at the Whitney Museum of American Art, New York; and String and Rope at the Sidney Janis Gallery, New York. These three presentations defined the emerging movements of conceptual art, process art, and fiber art, respectively. In his rope reliefs, Rohm united the three currents by giving equal weight to issues of idea, process, and material. Knotted into grid shapes and darkened with a brown, oil-based wood stain, these netlike structures were nailed directly onto the gallery walls. Rohm then performed a sequence of simple, minimal interventions that drastically altered the appearance of the original grids.

Rohm divided his rope sculptures into three categories based on the gestures he executed. He made the first set by stretching or relaxing the rope; the second, by cutting it; and the third, by piling it. Gravity is the common denominator in the three groups. Untitled, 1969, is a knotted grid that exemplifies the first body of work. For this piece, Rohm tacked a rectangular net along its perimeter to the wall and then removed the nails along the top and right edges. He had anticipated that this would result in a crisp diagonal as with folded paper; instead, the rope slouched into an asymmetrical catenary curve. As it so often did, the material behaved contrary to Rohm’s prediction, introducing the element of chance.

Chance was also a factor in Rohm’s second and most influential series—rope grids he cut at predetermined points, such as Untitled, 1970. These cuts nearly always followed a logical pattern he had plotted on a preliminary diagram. Paradoxically, these methodical, orderly cuts caused the loose ends to dangle and droop into irregular, and at times even chaotic, new compositions. Rohm created a tension between rationality and randomness; after the grid’s connections were severed, its organized, geometric pattern devolved into disarray, illustrating the law of entropy that preoccupied many American artists during the 1970s.  The configuration of each sculpture provides the viewer with enough visual information to identify where Rohm sliced the grid and to mentally reconstruct the trajectory of the rope’s descent. “Visually, if it’s clear enough, one would read that that’s what happened,” he explains in an Artscanada article. “It’s not an illusion, it’s what actually did happen.”

Due to the ephemeral, disposable nature of Rohm’s early media, most of those early pieces were recycled or discarded soon after they were made. Like many important examples of conceptual and process-based works of the 1960s and ’70s, these two Rohm sculptures exist as instructions until they are realized in rope. Working with Rohm, and later his widow, Candy Adriance, the ICA/Boston obtained both the specific instructions for the works and recommendations of rope type. These works join other sculptures in fiber in the collection by artists such as Françoise Grossen and Sheila Hicks that appeared in Fiber: Sculpture, 1960—present, organized by Jenelle Porter, former Mannion Family Senior Curator, and enable the ICA to give a more complete art-historical story about approaches to process and material in sculpture of the 1960s and ’70s. 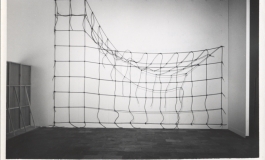