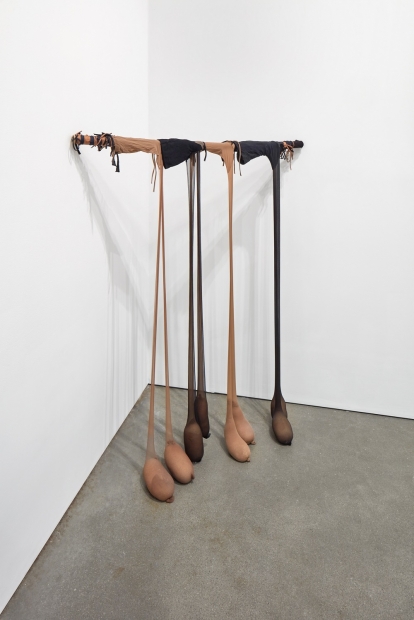 Since the 1970s, Senga Nengudi has been a leading figure of the African American avant-garde in Los Angeles and New York. The artist’s background as a dancer and choreographer informs her practice. In the 1970s, she was first recognized for her anthropomorphic nylon mesh sculptures and installations, which she often incorporates into her performances, testing their limits by manipulating, wearing, and stretching these nylon works.

On her use of material, Nengudi explained, “I am working with nylon mesh because it relates to the elasticity of the human body… . From tender, tight beginnings to sagging… . The body can only stand so much push and pull until it gives way, never to resume its original shape.” R.S.V.P. Reverie–“B” Suite is part of the artist’s pioneering R.S.V.P series, which was exhibited in her breakthrough 1977 show at Just Above Midtown Gallery, whose mission was to provide an exhibition platform for black artists. Nengudi composes the work from worn panty hose filled with sand, which she then knots and hangs from a horizontal bar. The work possesses strong corporeal references, suggesting a body stretching or in slow motion. It also activates the built space, drawing attention to the corner where it is installed and joining wall and floor. The artist has described her installations as “subtle and intimate, involving issues of time and personal change.” R.S.V.P. Reverie–“B” Suite was included in the ICA/Boston’s acclaimed 2011 through 2012 exhibition Dance/Draw.

R.S.V.P. Reverie–“B” Suite introduces a new artist to the collection and the work is in dialogue with the already strong collection of sculptures by women in the Barbara Lee Collection of Art by Women. It also connects to numerous artists in the collection who use found materials, such as Alexandre da Cunha, Tara Donovan, Ellen Gallagher, Mona Hatoum, and Charles LeDray, among others. In addition to her inclusion in Dance/Draw, Nengudi is also part of We Wanted a Revolution: Black Radical Women, 1965–85, a historic group exhibition that was organized by the Brooklyn Museum and will travel to the ICA in summer 2018. Most importantly, the addition of R.S.V.P. Reverie–“B” Suite expands the narratives the museum’s collection can tell, shedding light on untold histories, such as the activism and robust artistic production by black women artists in mid to late twentieth-century America.