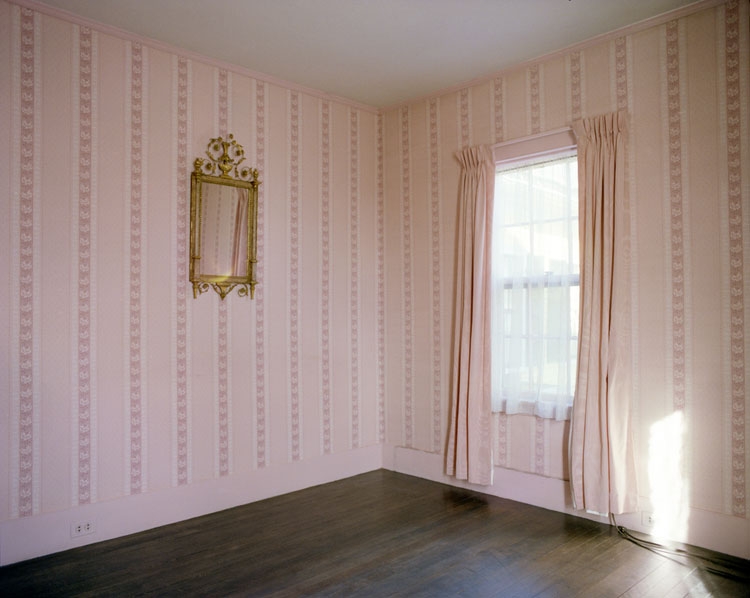 The photographs of Shellburne Thurber most frequently show unpopulated houses and rooms. Although the interiors are devoid of people, Thurber is interested in the ways they bear the presence of their occupants. “I became intrigued,” she says, “by the uncanny way in which inhabited spaces take on the energy of those who live and work in them.” Thurber first created this kind of image soon after her mother died, when photographing her mother’s spaces was a way to process her life and death on a deeper level. In addition to the homes of loved ones, Thurber has photographed spaces such as motel rooms and abandoned houses in the southern United States. Many of these images take on a funereal quality, evoking memory and loss.

Aunt Anna’s House—Stripped: The Pink Study shows a room in the New Hampshire house owned by Thurber’s aunt Anna. After Anna died, Thurber took a series of photographs of the house’s empty rooms, the sites of numerous childhood memories. The only visual traces of Aunt Anna are the pink wallpaper and gilded mirror. What is most visible in the photograph are the absences: of the furniture Anna once owned, the pictures that lined her walls, and Anna herself. One small patch of light appears on the right wall. Thurber has said of this series, “These photographs, more than any of my other work, were an act of commemoration. It was all about color and light, and [Aunt Anna] was in the light.”

Thurber belongs to a group of artists often referenced as the “Boston School,” which also includes Philip-Lorca diCorcia, Nan Goldin, and Mark Morrisoe. The histories of the Boston School and the ICA/Boston are deeply intertwined, as the ICA in 1995 staged the first exhibition of these artists as a coherent group. The museum has developed a strong collection of their works, strengthened by this addition.