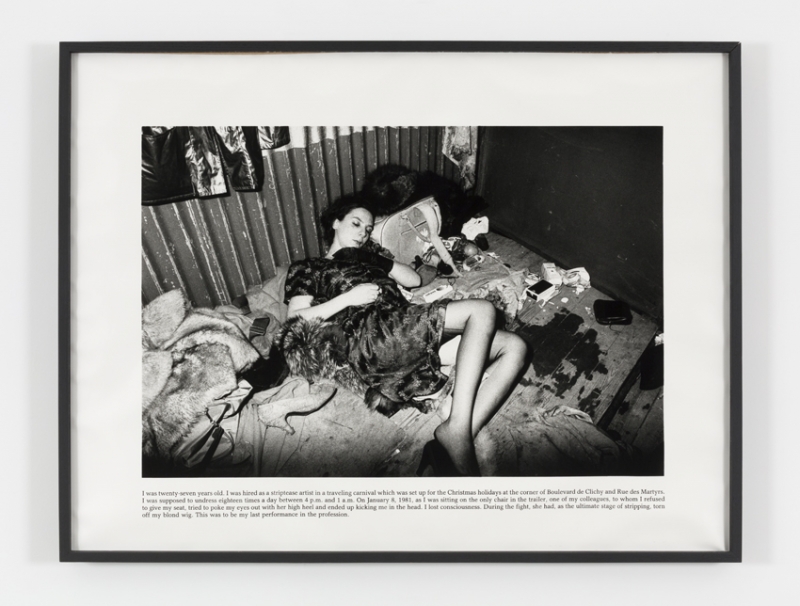 Since the late 1970s, Sophie Calle has made work that explores the sphere of human relationships. Most closely associated with conceptual art, Calle employs provocative methods and a wide range of media, including books, photography, video, film, and performance, to investigate subjects such as identity and intimacy. She is well known for her voyeuristic and detective-like projects, which have featured others’, and, several times, her own, life  in its emotional and psychological dimensions. In her documentation and presentation of these performances, she often uses text and photography in ways that redefine notions of truth, fiction, and narrative.

The Doctor’s Daughter is a photograph from Calle’s larger project by of the same title that tells the story of a doctor’s daughter, a little girl named Sophie, who grows up to become a striptease artist. The black-and-white photograph print depicts a woman (presumably the character Sophie, who is played by Calle) lying on the floor on a bed of rumpled clothes and strewn belongings. Below the photograph is a text written in the first person recounting the subject’s work as a striptease artist, including a dramatic and violent encounter with a fellow stripper “on January 8, 1981” that led to her leaving the profession. The text functions as a caption, endowing the sexually charged and seedy scene with a degree of authenticity. Together, text and image construct the fictive protagonist who elides with the artist’s own biography.

This work forms part of the ICA/Boston’s strong collection of photography, especially work by artists who examine identity, such as Rineke Dijkstra, Nan Goldin, Ragnar Kjartansson, and Catherine Opie.

Gift of Peggy and David A. Ross in honor of Jill Medvedow