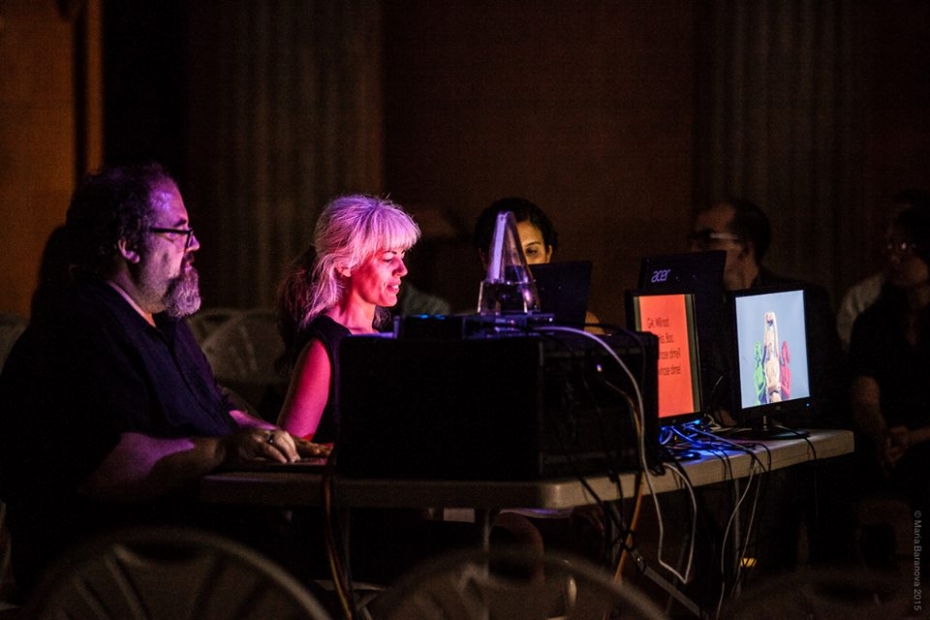 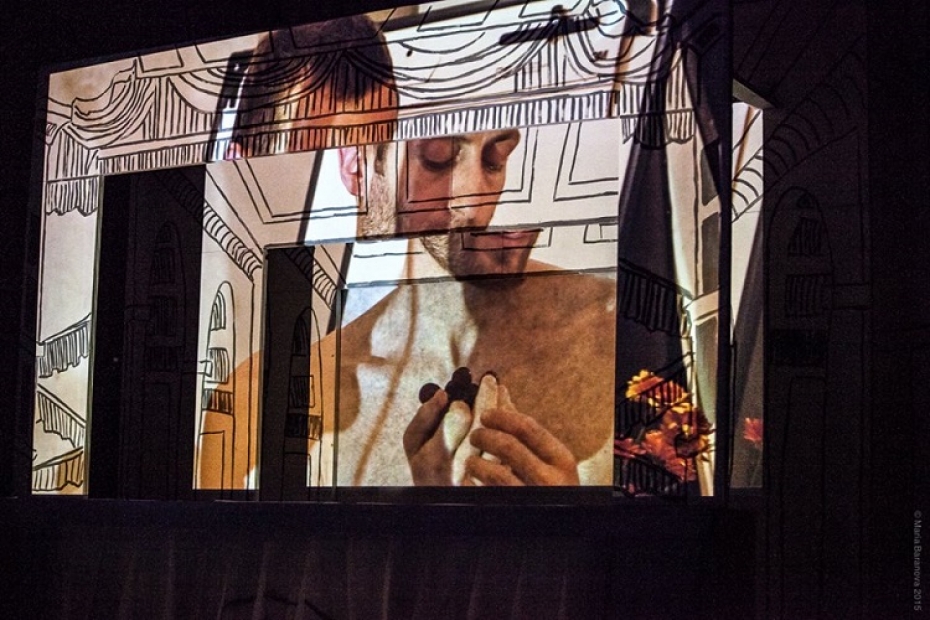 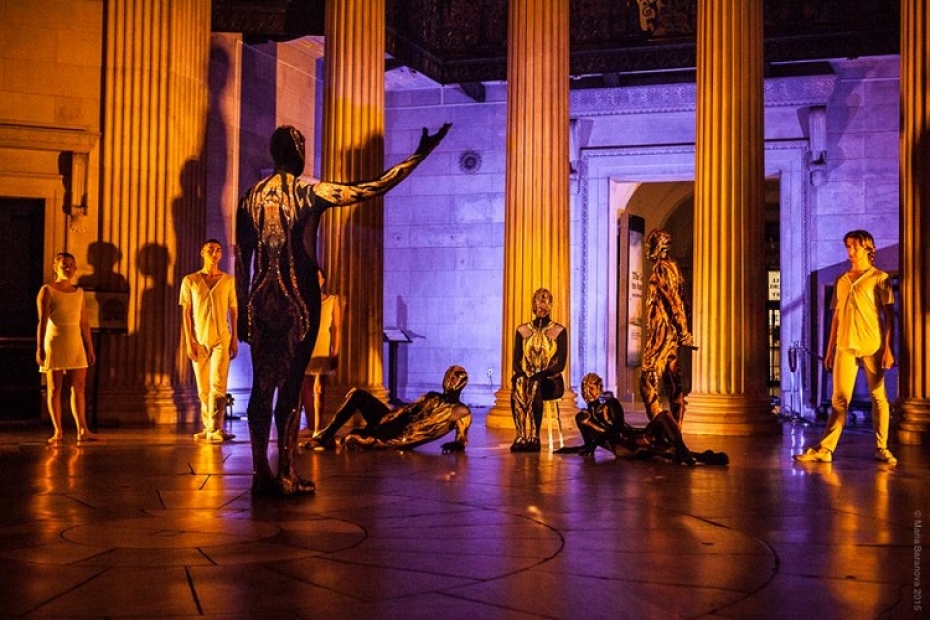 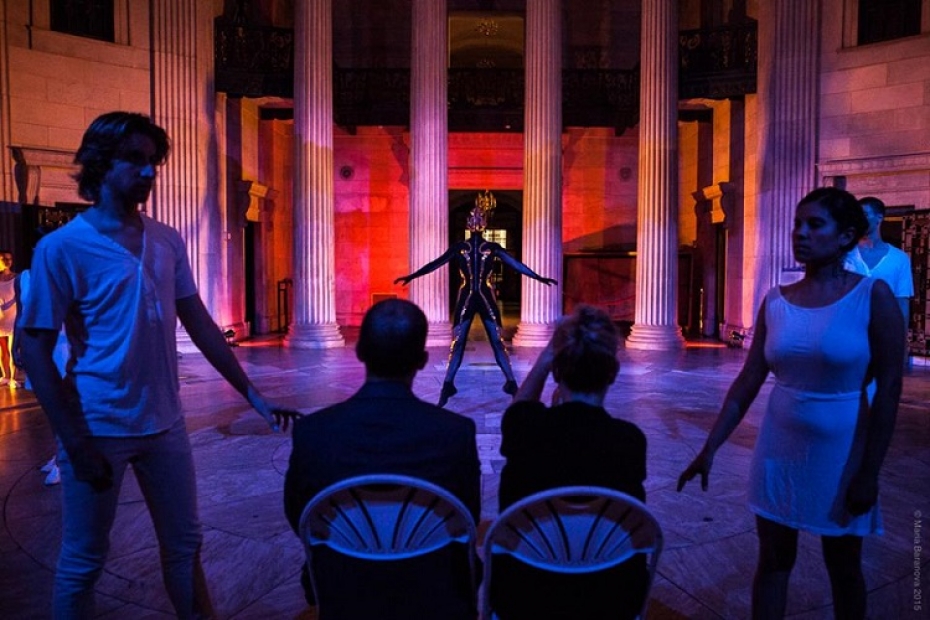 In April, the ICA presents Brooklyn-based choreographer Yanira Castro and her company a canary torsi in Court/Garden, a “spectacle in three acts” that transports the 17th-century French court to our modern time and space. We spoke with Castro about spectacle, Beyoncé, the role of the audience, and the work’s progression from monarchy to binary democracy to self-organization.

You write that Court/Garden takes as its inspiration the spectacles of Louis XIV’s court, the spectatorship of the proscenium stage, and the presentation of live video feeds as cultural, social and political frames of experience. Where are today’s spectacles?

Oh, Beyoncé. Just cutting right to the chase, it’s probably most obvious in pop culture. I’m sure you’ve seen photographs on social media where famous rappers are paralleled with monarchs. [[Ed. note: Here are some examples Castro cites.]] They’re wearing contemporary clothing, but the way they dress and present themselves recalls the 17th century. There’s Beyoncé’s “bow-down bitches,” Kanye West’s “I am a god.” All of this language is baroque, monarchical. That’s spectacle to me.

Where I started was a very formal question about how dance performances came to be presented in proscenium environments when the body is so much more fully experienced up close, or in the round. My research took me to the beginnings of ballet and therefore to Louis XIV. I became obsessed with him, and I kept thinking, this reminds me of the fashion runway, of famous hip-hop artists, of Trump.

Do you generally eschew proscenium stages?

It’s not so much that I don’t work on stages, but that I’m interested in creating a very specific environment for each work that addresses the needs of that piece. Most often those turn out not to be prosceniums.

With this piece, we studied the spaces in which Louis XIV would present his spectacles – often gardens or the halls of Versailles. These were not theaters, though a lot of interesting theatrical machines were brought in to make these spaces fantastical.

Louis XIV was a famous dancer himself. There was a very important dance called the Ballet de la Nuit, in which he rose, at dawn, as the sun. That’s why he’s known as the Sun King. The dance was spectacular, and a symbol of his future as King. He was 14. He loved dance and supposedly, early in his reign, rehearsed every day, sometimes at midnight. The whole French court performed for itself and took dance classes with their dance masters. It was an important part of how the court functioned.

Later on Louis started a ballet school, and eventually a professional space was created where the nobility was no longer performing for itself but was paying artists to come and dance for them. That’s a pretty radical shift in one person’s lifetime.

Does Court/Garden change significantly when you move it from place to place?

It’s radically different. The first place we performed it was St. Mark’s Church, which is a very simple Protestant church, really beautiful, all white. In that space we wanted to make really clear perspectives, so we brought in these mirrored panels (which we’ll bring to the ICA also) to create a forced perspective as the dance progresses. At the time of Louis XIV they would create these panels that they would bring into rooms to create these forced perspectives, with the King of course always being at the apex.

We also performed it at Federal Hall, which is right across from the New York Stock Exchange; it’s where George Washington was inaugurated as president, and it was the first seat of the republic. That was a marble-floored rotunda, pillared, and amazingly ornate. It didn’t need or want the panels; it needed a very different treatment to make the dance come alive within it. So instead we brought in an army of “cupids” dressed in white who created the perspective through shapes they took on in their bodies.

At the ICA, we’re thinking about how we can investigate those orange seats in a visual way. How to make them stand out or glow? It’s also a high vertical space, and in my dream of dreams there would be a jumbo screen hanging from the ceiling. That’s not going to happen, but there’s so much that can happen in that room that reimagines the piece in a contemporary way.

The piece takes as a source the traditional canary dance. What is the history there?

The Canary was a baroque dance that was very popular throughout Europe. The Spanish saw people dancing in the Canary Islands and were so enamored that they created their own version (or appropriation) and called it the Canary. We don’t know what they originally saw or the dance they created. The first record we have is an Italian version from the 17th century that we learned for Court/Garden from Catherine Turocy of the New York Baroque Dance Company. We also learned the 18th-century French version, and they’re very different from each other.

The baroque world is very symmetrical, so there’s a man and a woman and they face one another, and it’s a call and response that’s completely in time. The steps are very much to the beat of the canary music, and everything’s very pronounced. It’s a very difficult dance – we spent over a month learning it and still didn’t feel we’d mastered it.

But this would have been performed by the nobility?

It would have been performed by the court, for one another. These people must have been taking classes all the time to be able to do these dances in a way that’s at all masterful. It was obviously really important to them: how you dress, how you dance, how you present yourself when speaking to others, there’s a lot of code in being a member of the court. We read about people who were laughed out of the court because they messed up a dance.

You’ve said you wanted to make a 21st-century canary. How did you do that? How is the movement or visual language different?

In the entire first act of Court/Garden there are no steps that aren’t technically part of the Canary. We did not fabricate anything “new.” But we took it off beat, and we completely reorganized it in a random pattern so that the steps didn’t necessarily flow; over time, the dancers made those transitions smooth. When baroque practitioners have seen the work, they tell me they see the influence, but it also looks “other”. And for contemporary dancers, there’s a feeling of otherness without it sitting in a particular century. That’s what I wanted to achieve, this feeling that you’re looking at something quite odd in its historical placement.

You really did a lot of research. What were some of your most influential resources?

I started with this question about the proscenium, and the book Listening in Paris [by James H. Johnson] was the first place I went to that talked about these spaces. The book is about music, but back then you couldn’t separate music from the ballet. It talks about the moment when the proscenium becomes what we consider the proscenium: the fourth wall, the audience is in darkness and still, the performers under light. This was partially because the music was changing. After the revolution it was becoming more story oriented, so you had to listen in order to be able to follow. Before that it was more spectacle driven. The performances may have been connected by a theme, but it wasn’t something you had to watch beginning to end; people often came at intermission.

There was also the revolution itself. Beforehand only people of a certain status were in these spaces, and the king would literally decide who sat in each seat. The closer you got to him, the more important he thought you were. What we now call the orchestra didn’t have any seats; it was one giant pit basically for the soldiers. Those spaces were completely lit, and the show was just as much about the audience.

You basically cast the audience as the court.

The basic principle is that they are treated as the court, so when they enter, they go through what we call a modern calling. Back then, someone would call out your name – Duke and Duchess of SuchandSuch – as you entered the room. We created a contemporary version. In the performance environment there’s a video screen, and the images of people as they arrive are presented to the audience that is already there, so that people can see who is arriving. In my work I’m invested in the presence of the audience; I always try to think of ways that the audience are casted as part of the production. Each piece handles that differently, and while studying Louis XIV, it became clear that the audience was the court.

It’s interesting that you use video and screens to create a kind of public place when so much of our “public” appearance now is online.

I’m always asking myself, where are the connections between the physical body and media environment? How do they coexist? How can they inform one another? You should be present to see this dance. It is a live experience, but there are elements that are on the screen and give you a different feeling that’s also inherently emotional. Those are the things that I’m interested in moving into the future. These spaces we know so well as contemporary people, how do they bleed into our past? I can’t watch a hip-hop video anymore without thinking, “this is right out of the 17th century!” We do carry the history with us. It’s everywhere.

This interview has been edited and condensed.