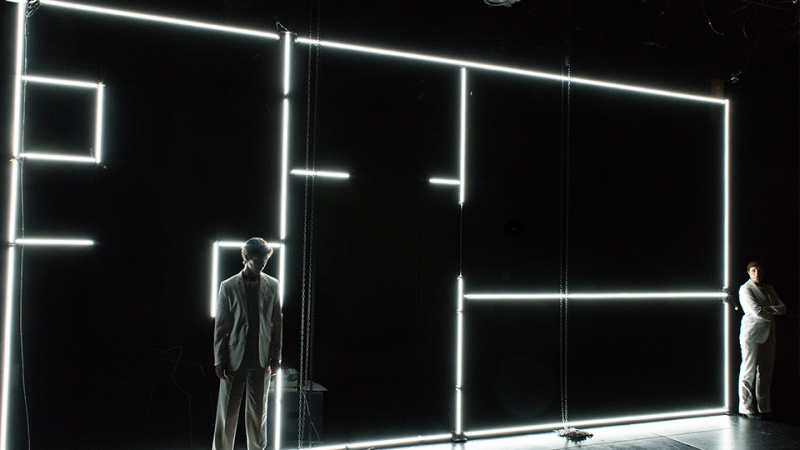 Lars Jan, The Institute of Memory (TIMe). Photo courtesy of the artist.

Sep 30, 2015By David Henry, Director of Performing and Media Arts

Four remarkable new theater pieces and why you should see great performance more than once.

The Time-Based Art Festival (TBA), put on by the Portland Institute of Contemporary Art (Oregon) for the past 13 years, is one of my favorite places to see new and experimental theater, dance, and music from around the world. Taking place throughout the city in theaters, parks, churches, abandoned warehouses—pretty much anywhere you can imagine—there is a casual vibe where artists and Portlandia folk come together to express their individuality and community.

This year I was able to be there for just a couple of days but caught a couple of great artist talks and four remarkable shows in that short time.

My first show was Requiem Mass: LGBT / Working Title. A labor of love by the composer (and Portland native) Holcombe Waller, the event took place in the Trinity Episcopal Cathedral and honored those whose lives had been cut short because of their sexual/gender orientation. The one-hour work had all the trappings of a mass—a procession down the aisle, readings, sermons—but it was really the music, with a choir of 40 community singers, a pipe organ, and an ensemble, that raised the spirit of the 300-plus attendees.

Next up was a real eye opener for me. Until the week before, I had never heard of the Italian choreographer Allesandro Sciarroni. The U.S. premiere he presented, FOLK-S, Will you still love me tomorrow is impossible to describe—and any attempt to do so only makes it sound deadly dull. It is anything but. As the audience enters, six dancers in silhouette on the stage perform rhythmic movement taken from a Bavarian folk dance (one of the dancers is wearing Lederhosen). After the audience is seated and the house lights dim and the stage lights come up, the dancers extend the movement across the stage. After a pause, one of the dancers says the dance will continue as long as there is at least one person seated in the audience and one person on the stage. I could go on, but to what effect? You have to see it. Suffice it to say that throughout the next 90 minutes or so, one goes through a range of experiences—humor, jet-lagged exhaustion, trying to figure out just how they are doing what they are doing, excitement, awe and, in the end, a powerful sense of empathy with both fellow audience members and the dancers on stage.

The work that drew me to Portland this year was Lars Jan/Early Morning Opera’s The Institute of Memory (TIMe). I have seen other works by Jan and been seduced by the mystery he creates with text, performance, and media. In this latest work, which was first presented last spring but has undergone a substantial rewrite since, he sets out to uncover his father, who is a distant memory at most. A refugee from Nazi Germany, a fighter for the French resistance, and perhaps a spy for the CIA, his father looms as a shadow throughout Jan’s life, but only a few specific memories of him remain (including his giving him a Gore Vidal novel for Jan’s fifth birthday.) The search to find who his father really was takes him to the Polish Institute of National Memory, Massachusetts General Hospital, Washington, D.C., and Harvard, where the elder Jan was associated with the School of Government. The story is told simply with two actors, an amazing mobile light grid, some media, and Gorecki’s 3rd Symphony. Stay tuned. The ICA is a co-commissioner of this work through the National Performance Network, and we may well be presenting this in Boston.

As a rule, I wish we could all see performances more than once.

Finally, I was able to (re)see a work I had seen last spring in New York: Okwui Okpokwasili’s Bronx Gothic. Living in the intersection between dance, theater, and a visual art installation, the work channels the confusion and anxiety that an 11-year-old girl growing up in the Bronx might feel as her body transforms, her friendships complicate, and people start looking at her differently. The innocence of playing double Dutch collides with sexual assault in this very powerful performance.

As a rule, I wish we could all see performances more than once; as with great visual art, great performance reveals more upon every viewing. I can’t end this report without relaying what a powerful performer Okwui is. Her use of words and trance-like movement takes a story and burns it into your being. Upon first viewing, the work made me uncomfortable. But now that I’ve seen it a second time, I know that 11-year-old girl lives somewhere inside me.