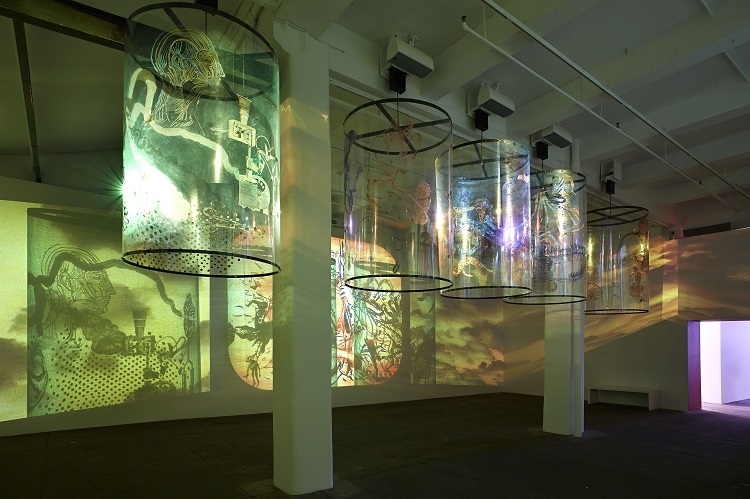 (Boston, MA — Jan. 13, 2016) On July 1, the Institute of Contemporary Art/Boston (ICA) opens an immersive video installation by Mumbai-based artist Nalini Malani (b. 1946, Karachi). Organized by Eva Respini, Barbara Lee Chief Curator, In Search of Vanished Blood will open to the public on June 29 and remain on view until October 16, 2016. Malani, India’s foremost media and installation artist, has dedicated her career to artistic achievement as well as activism for women’s rights in her home country and across the globe. This exhibition showcases her groundbreaking installation, In Search of Vanished Blood, which was commissioned by Documenta 13, and premiered in Kassel, Germany in 2012.  This immersive multi-media work features six 11-minute projections cast through painted rotating Mylar cylinders suspended from the ceiling. Visitors will witness an intricate shadowplay as an array of layered images are cast onto the gallery walls, enveloping viewers in a dazzling multi-media environment.

Born in Karachi, but forced to move to India following the 1947 partition of India, Malani channeled her life experiences directly into her art. Initially trained as a painter, Malani expanded her interests into video and installation projects that invoked references to her cultural and historical past while also grappling with the inequities of women’s rights. In Search of Vanished Blood takes its name from a poem written by Pakistani poet Faiz Ahmed Faiz which captures the intricacies of love, war, loss, and bloodshed within a country rocked by political unrest. Malani’s installation revives this history by painted elements that adorn the suspended Mylar cylinders as reference to Eastern and Western historical and cultural iconography, including sources such as Homer’s Illiad to the Ramayana. When illuminated, these icons dance around the room, complemented by an audio track.  Malani brings these rich and complex historical narrative threads together with In Search of Vanished Blood.

The presentation of Malani’s installation will be accompanied by additional works on paper and a stop-motion animation.

About the artist
Born in Karachi, India (now Pakistan) in 1946, Nalini Malani received her artistic training at the Sir Jamsetjee Jeejebhoy School of Art in Mumbai (1964-1969). Malani’s work is influenced by her experiences as a refugee of the Partition of India. She places inherited iconographies and cherished cultural stereotypes under pressure. Her point of view is unwaveringly urban and internationalist, and unsparing in its condemnation of a cynical nationalism that exploits the beliefs of the masses. Hers is an art of excess, going beyond the boundaries of legitimized narrative, exceeding the conventional and initiating dialogue. Characteristics of her work have been the gradual movement towards new media, international collaboration and expanding dimensions of the pictorial surface into the surrounding space as ephemeral wall drawing, installation, shadow play, multi projection works and theatre. Malani was awarded the prestigious Fukuoka Prize 2013 for Arts and Culture.