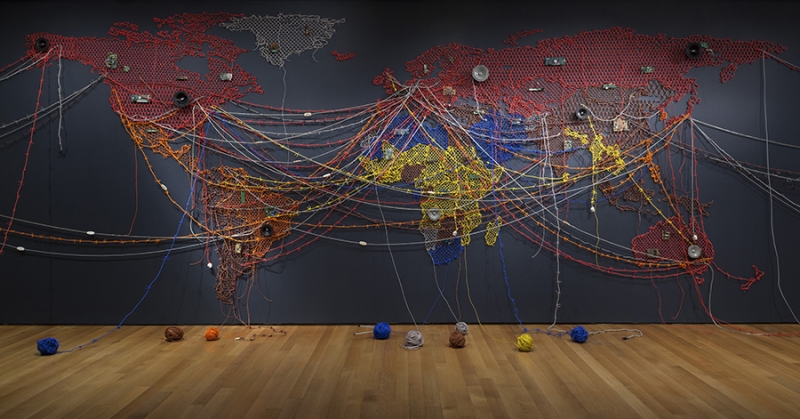 Timely exhibition shines spotlight on how contemporary artists are responding to the migration, immigration, and displacement of peoples today, in works ranging from personal accounts to poetic meditations.

(Boston, MA—June 14, 2019) On October 23, the Institute of Contemporary Art/Boston (ICA) opens When Home Won’t Let You Stay: Migration through Contemporary Art, a significant exhibition that explores how contemporary artists are responding to the migration, immigration, and displacement of peoples today. The exhibition highlights diverse artistic responses to migration ranging from personal accounts to poetic meditations in a range of mediums, including sculpture, installation, painting, and video. Featuring 20 leading artists from around the globe, the exhibition is comprised of over 40 works made since 2000, including Richard Mosse’s multi-screen video installation Incoming, Yinka Shonibare CBE’s recently commissioned The American Library, and a new site-specific, community-based project by Boston-based artist Anthony Romero. On view Oct. 23, 2019 through Jan. 26, 2020, When Home Won’t Let You Stay: Migration through Contemporary Art is organized by Ruth Erickson, Mannion Family Curator, and Eva Respini, Barbara Lee Chief Curator, with Ellen Tani, Assistant Curator. It travels to the Minneapolis Institute of Art and the Cantor Arts Center at Stanford University.

“Today, migration and immigration are among the most painful, complex, and contested issues of our time. The United Nations Refugee Agency estimates that 68.5 million people are forcibly displaced worldwide: refugees, asylum-seekers, and those who are internally displaced. When Home Won’t Let You Stay considers how contemporary artists grapple with upended ideas of home, histories, borders, and belonging. I am honored and grateful to each of the artists in the exhibition, whose combined knowledge, experience, and perspective explore these themes through the lens of their art,” said Jill Medvedow, the ICA’s Ellen Matilda Poss Director.

“When Home Won’t Let You Stay borrows its title from a poem by Warsan Shire, a Somali-British poet who gives voice to the experiences of refugees. The exhibition shares with Shire’s poem the imperative to give a public platform to the variety of experiences around migration, including the jarring realities and experiences of refugees and immigrants. The artists included in this exhibition, some of whom are immigrants, refugees, or migrants, challenge established ideas of what it means to migrate and reveal how the forces of migration touch us all,” said curators Erickson and Respini.

At the center of When Home Won’t Let You Stay is the power of artistic thinking to reflect on the complexity of global migration today and to process the heated discourses around it. The featured artists hail from over a dozen countries—such as Colombia, Cuba, France, India, Iraq, Mexico, Morocco, Nigeria, Palestine, South Korea, the United Kingdom, and the United States—and reveal migration as a universal force that reimagines ideas of home, place, and transit in the 21st century. In our politically divisive and uncertain times, this exhibition positions migration as an utterly common aspect of contemporary life that shapes public rhetoric, opinion, and policy, and touches individual lives in very real ways.

When Home Won’t Let You Stay responds to how issues of migration and movement can be interpreted through the ICA’s unique position on both sides of the Boston Harbor—in the Seaport and in East Boston, where the ICA opened the Watershed in the summer of 2018. Highlighting such potent sites as the sea, border, home, and nation, the exhibition moves from the global to the local scale.

The sea and bodies of water figure powerfully in many narratives, experiences, and images of migration, and it is one of the most resonant and recurring sites in the exhibition and museum. The sea serves as a leitmotif in Isaac Julien’s symphonic three-channel video Western Union: small boats (2007), filmed on the Italian island of Lampedusa, a location for precarious migrant crossings between Africa and Europe. The blue clothing in Kader Attia’s La Mer Morte (The Dead Sea) (2015) evokes the sea and the migrant and refugee lives lost at sea. The Atlantic Ocean looms large in Xaviera Simmons’s work, which enfolds references to Christopher Columbus’s encounters with American landscape, the transatlantic slave trade, and the Great Migration.

Numerous projects address the navigation of routes, borders, and camps. Reena Saini Kallat maps various routes of the movement of people and goods across oceans with twisted and barbed wires in the site-specific installation Woven Chronicle (2011-16). Richard Mosse’s video work Incoming (2014-17) documents masses of people moving along some of the global migration routes from the Middle East and North Africa into Europe and inhabiting some of the largest refugee camps in Europe. The U.S.-Mexico border is the focus of Guillermo Galindo and Richard Misrach’s multiyear collaboration Border Cantos (2004-16). They bring together images and artifacts gathered at the border, capturing its quality as a no-man’s land, inhospitable territory, and accordingly the distress, and also the determination and resourcefulness, that fuel people’s journeys through these borderlands.

Global migration casts the notion of “home” into sharp relief; the impossibility of returning home, for many, invites the role of memory, movement, and imagination in redefining both the idea of home and the shape of nationhood. Do Ho Suh’s exacting fabric replicas of the dwellings where he has lived in Seoul, Berlin, New York, and other cities, highlight journey, memory, and mobility as constituent parts of home. The exhibition at the ICA concludes with Yinka Shonibare CBE’s The American Library (2018), a room filled floor-to-ceiling with over 6,000 books bound in Dutch wax cloth and imprinted in gold with the names of individuals who are first or second generation immigrants, or descendants of those who moved during the Great Migration, and have made a contribution to American culture. The work’s interactive web platform invites visitors to learn more about the individuals named, and to contribute their family’s own migration stories, establishing the library as an ever expanding, always unfinished archive.

Extending the ICA’s ongoing outreach to and collaboration with schools and surrounding communities, the ICA invited Boston-based artist and educator Anthony Romero to develop a project that he has titled … first in thought, then in action. From the spring of 2019 through the run of the exhibition (Oct. 23, 2019 through Jan. 26, 2020), Romero will organize a series of listening sessions, community gatherings, and performance events at the ICA, the Watershed, and locations in East Boston, offering participants and audiences the opportunity to think through the many impacts of immigration law and policy. Dates and more details about the events will be announced soon. … first in thought, then in action expands ideas, images, questions, and provocations beyond the museum, harnessing the exhibition as a means to invest more deeply in local communities.

The presentation of When Home Won’t Let You Stay: Migration through Contemporary Art will be enriched by gallery talks and artist talks. More details to be announced soon on icaboston.org.

Anthony Romero’s …first in thought, then action is supported, in part, by Robert Nagle, a Live Arts Boston grant from the Boston Foundation, and the Radcliffe Institute for Advanced Study at Harvard University.