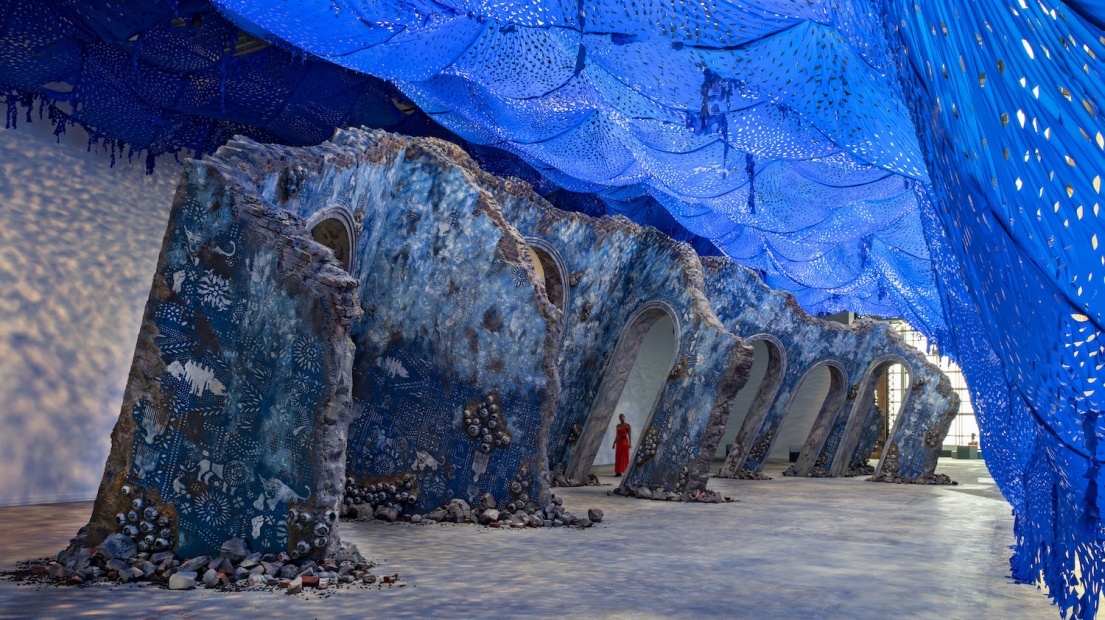 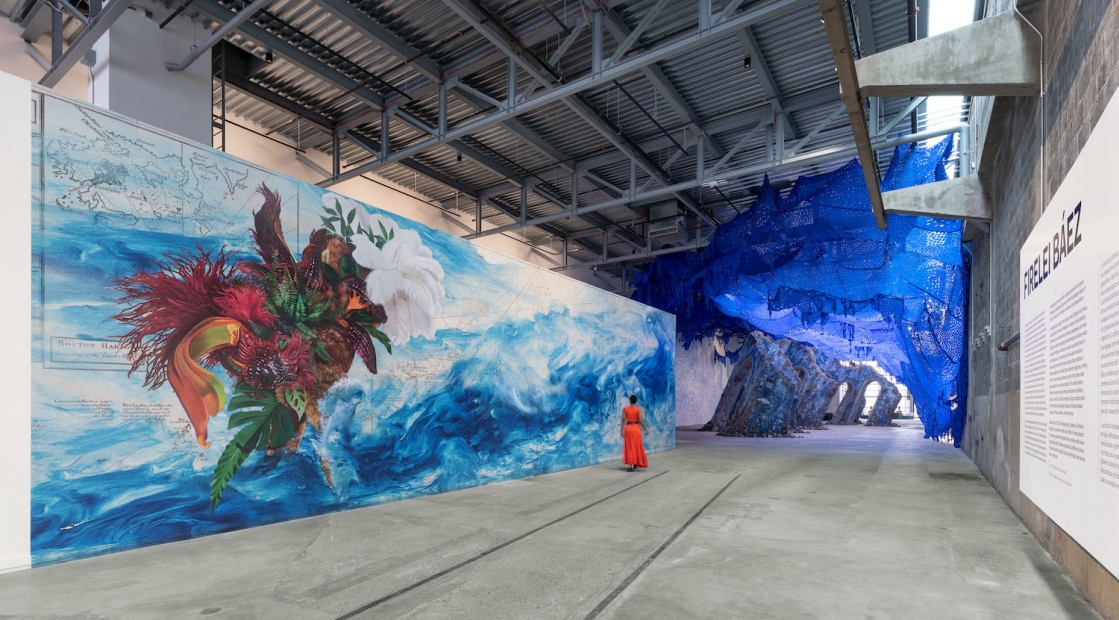 (Boston, MA—April 5, 2021) The Institute of Contemporary Art/Boston (ICA) will open the next season of the Watershed, its project space in East Boston, with a new, monumental sculpture by acclaimed New York-based artist Firelei Báez (b. 1981, Santiago de los Caballeros, Dominican Republic). In her largest sculptural installation to date, the artist reimagines ancient ruins as though the sea had receded from the Watershed floor to reveal the archeology of human history in the Caribbean. Accompanied by an undulating blue expanse overhead—evoking both water and the night sky—this immersive sculptural installation includes a soundscape created from recordings of Boston Harbor and the Caribbean, featuring sounds of the sea and maritime bustling, as well as personal stories of migration. In addition, a large-scale mural created by the artist for the Watershed—featuring a seascape populated by Ciguapa, a mythological creature from Dominican folklore—creates a multi-textured viewer experience. These elements weave together various histories and stories, setting the stage for visitors to be transported into new realms. Opening to the public on July 3 (Member Preview Days begin July 1; more details at icaboston.org), Báez’s sculpture and mural will be accompanied by an art project by Boston-based artist Stephen Hamilton in the Watershed’s Harbor Room. On view July 3 to September 6, 2021, Firelei Báez is organized by Eva Respini, Barbara Lee Chief Curator.

“The Watershed’s location—in a working shipyard and as a trade site and point of entry and home for immigrants over decades—provides a pivotal point of reference for the work. Her installation will invite visitors to walk through passageways, travel through time, and experience the many streams of influence and interconnectedness that the artist conjures,” said Medvedow.

“Báez’s visual references draw from a wide variety of sources in the past, and are reconfigured to explore new possibilities in the present. Her site-specific installation at the Watershed combines her interests in various diasporic narratives—African, European, Caribbean—to cast cultural and regional histories into an imaginative realm,” said Respini.

Báez’s architectural sculpture is adapted from the Sans-Souci Palace in Milot, Haiti, built between 1810 and 1813 for the revolutionary leader and first King of Haiti, Henri Christophe I. The Haitian Revolution, led by self-liberated enslaved people against the French colonial government, was an early precursor to the abolition movements of the United States. Once a space of splendor, since an 1842 earthquake, the castle has been an archeological ruin. At the Watershed, Báez reimagines these ruins emerging from Boston Harbor’s sea floor. She embeds Sans-Souci within the geological layers of Boston, where histories of revolution and independence are integral, including often overlooked related narratives from non-European locations.

Báez’s intricately painted architectural surfaces include symbols of healing and resistance as well as sea growths native to Caribbean waters. Originally trained as a painter, Báez is an expert of trompe l’oeil. She considers all of her work, even the sculpture at the Watershed, to belong to the illusionistic realm of painting. The work could be considered a hybrid, where the illusion of a painting and physicality of a sculpture meet. The patterning of the sculpture’s surface is drawn largely from West African indigo printing appropriated from enslaved peoples in the 17th-century American South. American indigo was a driving force in the early national economy, and one of the primary trade goods shipped from colonial-era Boston. This material became intrinsically woven into early American decorative and utilitarian textiles—a symbol of “true blue” Americana. Báez’s sculpture points to the centuries-long exchange of ideas and influence between Europe, the African continent, and the Americas.

See artist Firelei Báez at work on this monumental installation on the new ICA Digital Guide on Bloomberg Connects. Available free by searching “Bloomberg Connects” on the App Store or Google Play.

Stephen Hamilton
Jul 3 to Sep 6, 2021
The Watershed’s Harbor Room will feature a presentation co-developed with Boston-based artist and educator Stephen Hamilton that highlights the generations-long tradition of indigo dyeing in West Africa too often ignored in the accounting of early American history. Considering Baez’s sculptural work that includes references to erased histories of the African diaspora from the West, Hamilton will bring these histories to life once again through words, images, and textiles. On display will be his painting Owners of the Earth (2020), a richly layered mixed-media work that refers to traditional artforms and philosophies from the Yoruba people in West Africa, accompanied by a description of the unrecognized historical contributions of West Africa to indigo use in the Americas, and educational materials depicting indigo dying techniques that the artist adopted during his research in southwestern Nigeria.

“A flexible space for gathering and education projects, the Harbor Room highlights artists from our community and features projects in response to our location and focused themes at the Watershed. Hamilton’s research, writing, and art seek to reclaim artistic knowledge lost during the transatlantic slave trade. For his paintings, he deploys a distinctive mixture of both Black American and traditional West African traditions, resulting in a unique and striking combination that feels both historical and contemporary at the same time,” said Monica Garza, the ICA’s Charlotte Wagner Director of Education.

Firelei Báez
Firelei Báez was born in 1981 in Santiago de los Caballeros, Dominican Republic, to a Dominican mother and a father of Haitian descent. Her upbringing between Hispaniola’s two countries, which have a longstanding history of tension predicated on ethnic difference, informs her concerns with the politics of place and heritage. She currently lives and works in New York City.

Báez received a BFA from the Cooper Union’s School of Art before receiving her MFA from Hunter College in New York. She is shortlisted for Artes Mundi 9 in 2021. In 2019, the artist’s work was the subject of solo exhibitions at the Mennello Museum of Art, Orlando, FL, the Witte de With Center for Contemporary Art, Rotterdam, the Netherlands, and the Modern Window at the Museum of Modern Art, New York. She was featured in the 2018 Berlin Biennale, Prospect.3: Notes for Now (2014), Bronx Calling: The Second AIM Biennial (2013), and El Museo’s Bienal: The (S) Files (2011). Her major 2015 solo exhibition Bloodlines was organized by the Pérez Art Museum Miami and travelled to the Andy Warhol Museum in Pittsburgh.

Stephen Hamilton
Boston-based artist and educator Stephen Hamilton incorporates both Western and non-Western artmaking techniques to create portraits of his contemporaries. As a Black American trained in traditional West African artforms, he recognizes his weaving, dyeing, and woodcarving as ritualized acts. These processes reclaim ancestral knowledge dissociated from Africans in the Americas during the transatlantic slave trade. Hamilton’s labor-intensive process to portray his living subjects with beauty, honor, and dignity also counters negative representations of Black Americans.

Hamilton completed his studies at the Massachusetts College of Art and Design and will soon pursue graduate work at Harvard University’s African and African American Studies Department. He also studied at the Nike Centre for Art and Culture at Osogbo, Nigeria in 2015–16 through an international artist residency award from Arts Connect International. Since 2018, he has served as an assistant professor of illustration at the Massachusetts College of Art and Design and a senior instructor at the school’s Artward Bound program, a college-access initiative for high school students. Hamilton’s work has been exhibited in venues including Boston City Hall, The Museum of The National Center of Afro-American Artists, the Bruce C. Bolling Municipal Building in Nubian Square, and Medicine Wheel Productions. His work can be found in the collections of the ICA/Boston and the Museum of Fine Arts, Boston.

On July 4, 2018, the ICA opened to the public its new ICA Watershed expanding artistic and educational programming on both sides of Boston Harbor—the Seaport and East Boston. Located in the Boston Harbor Shipyard and Marina, the ICA Watershed transformed a 15,000-square-foot, formerly condemned space into a vast and welcoming space to see and experience large-scale art. The Watershed builds upon the extraordinary momentum achieved by the museum since opening its visionary waterfront building, designed by Diller Scofidio + Renfro, in 2006. Admission to the Watershed—central to the museum’s vision for art and civic life—is free for all. The Watershed opened its inaugural year with an immersive installation by Diana Thater and its second year, 2019, with the U.S. premiere of John Akomfrah’s Purple. The Watershed was closed to the public in 2020 to support the city and state in their efforts to contain the spread of Covid-19. During the pandemic, the site has been used as a food distribution site to address a direct need within the East Boston community, which has experienced one of the highest rates of COVID-19 in Boston.

Since its founding in 1936, the ICA has shared the pleasures of reflection, inspiration, imagination, and provocation that contemporary art offers with its audiences. A museum at the intersection of contemporary art and civic life, the ICA has advanced a bold vision for amplifying the artist’s voice and expanding the museum’s role as educator, incubator, and convener. Its exhibitions, performances, and educational programs provide access to the breadth and diversity of contemporary art, artists, and the creative process, inviting audiences of all ages and backgrounds to participate in the excitement of new art and ideas. The ICA is located at 25 Harbor Shore Drive, Boston, MA, 02210. The Watershed is located at 256 Marginal Street, East Boston, MA 02128. For more information, call 617-478-3100 or visit our website at icaboston.org. Follow the ICA at Facebook, Twitter, and Instagram.