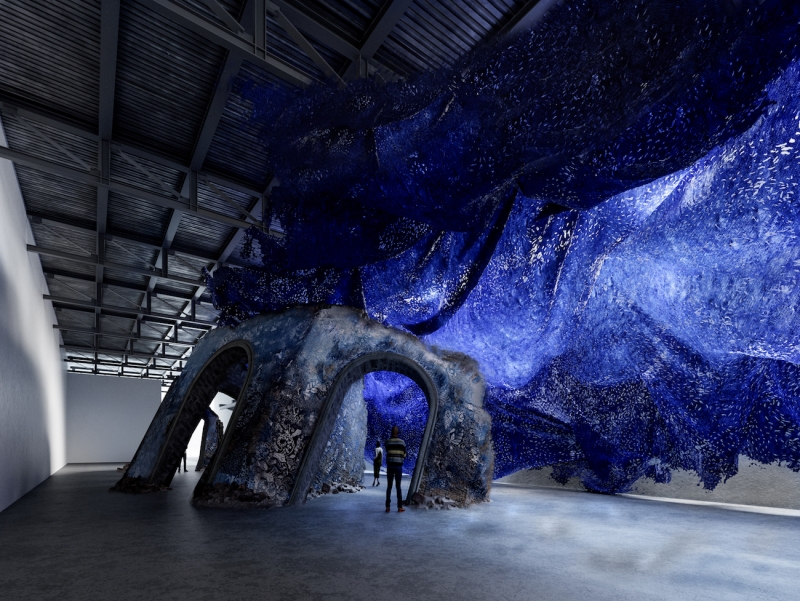 (Boston, MA—October 10, 2019) The Institute of Contemporary Art/Boston (ICA) will open the next season of the Watershed, its project space in East Boston, with a newly commissioned, monumental sculpture by acclaimed artist Firelei Báez, announced Jill Medvedow, the ICA’s Ellen Matilda Poss Director. In her largest sculptural installation to date, the artist reimagines ancient ruins as though the sea had receded from the Watershed floor to reveal the archeology of human history in the Caribbean. On view May 21–September 7, 2020, Firelei Báez is organized by Eva Respini, Barbara Lee Chief Curator.

“The Watershed’s location—in a working shipyard and as a trade site and point of entry and home for immigrants over decades—provides a pivotal point of reference for the work. Her installation will invite visitors to walk through passageways, travel through time, and experience the many streams of influence and interconnectedness that the artist conjures,” said Medvedow.

“Báez’s visual references draw from a wide variety of sources in the past, and are reconfigured to explore new possibilities in the present. Her site-specific installation at the Watershed combines her interests in various diasporic narratives—African, European, Caribbean—to cast cultural and regional histories into an imaginative realm,” said Respini.

Báez’s architectural sculpture is adapted from the Sans-Souci Palace in Milot, Haiti, built between 1810 and 1813 for the revolutionary leader and first King of Haiti, Henri Christophe I. The Haitian Revolution, led by self-liberated enslaved people against the French colonial government, was an early precursor to the abolition movements of the United States. Once a space of militant splendor, since an 1842 earthquake, the castle has been an archeological ruin. At the Watershed, Báez reimagines these ruins emerging from Boston Harbor’s sea floor. She embeds Sans-Souci within the geological layers of Boston, where histories of revolution and independence are integral, including often overlooked related narratives from non-European locations.

Báez’s intricately painted architectural surfaces include symbols of healing and resistance as well as sea growths native to Caribbean waters. The patterning of the sculpture’s surface is drawn largely from West African indigo printing appropriated from enslaved peoples in the 17th-century American South. American indigo was a driving force in the early national economy, and one of the primary trade goods shipped from colonial-era Boston. This material became intrinsically woven into early American decorative and utilitarian textiles—a symbol of “true blue” Americana. Báez’s sculpture disrupts assumed one-directional lines of influence, positing instead a centuries-long exchange of ideas and influence between Europe, the African continent, and the Americas.

Firelei Báez was born in 1981 in Santiago de los Caballeros, Dominican Republic, to a Dominican mother and a father of Haitian descent. Her upbringing between Hispaniola’s two countries, which have a longstanding history of tension predicated on ethnic difference, informs her concerns with the politics of place and heritage. She currently lives and works in New York City.

Báez received a BFA from the Cooper Union’s School of Art before receiving her MFA from Hunter College in New York. She has had solo exhibitions at Witte de With Center for Contemporary Art, Rotterdam, the Netherlands; the Mennello Museum of American Art, Orlando, FL; the Modern Window at the Museum of Modern Art, New York; the Pérez Art Museum Miami; and The Andy Warhol Museum, Pittsburgh, PA. Báez will participate in the 6th Ghetto Biennale (2019) and recently participated in the 10th Berlin Biennale (2018), Prospect.3 New Orleans (2014), Bronx Calling: The Second AIM Biennial (2013), and the 6th Latino, Caribbean, and Latin American Biennial at El Museo del Barrio (2011). She is on the shortlist for Artes Mundi 9 (2020) and the recipient of many awards, including the Soros Arts Fellowship (2019), the United States Artists Fellowship (2019), the College Art Association Artist Award for Distinguished Body of Work (2018), the Future Generation Art Prize (2017), the Chiaro Award (2016), and Joan Mitchell Foundation Painters & Sculptors Grant (2011). The artist’s work is represented in important collections worldwide, including the Studio Museum in Harlem (New York), Kemper Art Museum (St. Louis), Pérez Art Museum Miami, New Orleans Museum of Art, Spelman College Museum of Fine Art (Atlanta), and the Salomon Foundation for Contemporary Art (France).

On July 4, 2018 the ICA opened to the public its new ICA Watershed expanding artistic and educational programming on both sides of Boston Harbor—the Seaport and East Boston. Located in the Boston Harbor Shipyard and Marina, the ICA Watershed transformed a 15,000-square-foot, formerly condemned space into a vast and welcoming space to see and experience large-scale art. The Watershed builds upon the extraordinary momentum achieved by the museum since opening its visionary waterfront building, designed by Diller Scofidio + Renfro, in 2006. Admission to the Watershed—central to the museum’s vision for art and civic life—is free for all. The Watershed opened its inaugural year with an immersive installation by Diana Thater and its second year, 2019, with the U.S. premiere of John Akomfrah’s Purple.