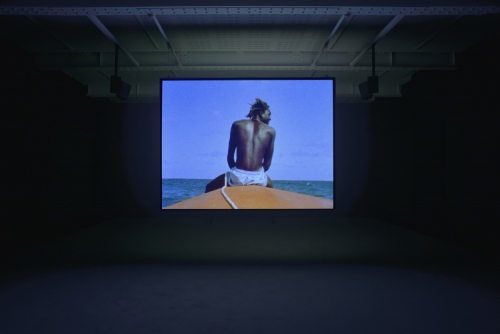 Boston, Mass. (June 8, 2106) — Jill Medvedow, Ellen Matilda Poss Director of the Institute of Contemporary Art/Boston (ICA), announced today the acquisition of Ashes, a momentous video installation by award-winning British artist Steve McQueen. A standout at the 2015 Venice Biennale, Ashes will make its U.S. debut at the ICA, where it will be on view from Feb. 15 through July 9, 2017.

“Ashes is a remarkable work of art; its visual and visceral power made an indelible impression on those of us fortunate enough to experience it in Venice.  Now, through an extraordinary act of generosity from ICA Trustee Tristin Mannion and her husband Martin Mannion, the ICA will be able to share the experience of Ashes with our audiences for generations to come,” said Medvedow.

“Steve McQueen is one of Britain’s most influential artists, known for his film and video installations as well as feature films such as ‘Hunger’ and ‘Twelve Years a Slave.’ Ashes expands on McQueen’s subjects of the political body, and the ways in which bodies can be confined and defined by history, labor, and the legacies of colonialism and globalism,” said Dan Byers, Mannion Family Senior Curator.

McQueen met Ashes, a charismatic young fisherman in Grenada while filming another work in 2002.  Shot on soft, grainy Super 8 film by renowned cinematographer Robby Müller, one screen of the installation portrays Ashes balancing on the prow of a bobbing boat, sailing through blue Caribbean water and sky.  He is surrounded by the open air and sea, completely at home in his world.  Ashes’ vitality and presence in this projection stand in contrast to the content of the second video projected on the screen’s other side, made eight years later, after Ashes’ death. The crisp, high definition video, shows the meticulous creation of Ashes’ gravestone and the digging of his grave. This footage provides the soundtrack to both projections, a precise, visceral soundscape of fabrication and digging overlaid by Ashes’ friend narrating his fate.

“Life and death have always lived side by side, in every aspect of life,” said McQueen. “We live with ghosts in our everyday.”

About Steve McQueen
Steve McQueen was born in London in 1969. His work has been collected by museums throughout the world, including Tate Gallery, London; MoMA, New York; The Art Institute of Chicago, Chicago and the Musee National d’Art Moderne George Pompidou, Paris. His film Five Easy Pieces showed at the ICA/Boston in 1995, one of his earliest screenings in the US. McQueen represented Britain at the Venice Biennale in 2009. A recent and highly acclaimed survey of his work was co-organized by the Art Institute of Chicago and the Schaulager, Basel. McQueen won the Camera d’Or at the Cannes Film Festival in 2008 for his feature Hunger, the only British director to be granted the prize, and the FIPRESCI prize for Shame at the 2011 Venice Film Festival.  12 Years a Slave was awarded three Oscars at the latest Academy Awards, including Best Film. Having been appointed Officer of the Order of the British Empire (OBE, 2002), McQueen was created Commander of the Order of the British Empire (CBE) in the 2011 New Year Honors for services to the Visual Arts. He lives and works in Amsterdam and London.

About the ICA Collection
In 2006, the ICA made the pivotal decision to start a collection. Offering a diverse overview of national and international artworks in a range of media, the collection provides an important resource for contemporary culture in Boston. This summer, the ICA marks 10 years of collecting with the largest and most ambitious presentation of its collection to date, First Light: A Decade of Collecting at the ICA. Occupying the entirety of the museum’s east galleries, this exhibition features over 100 works by artists such as Louise Bourgeois, Nick Cave, Paul Chan, Marlene Dumas, Eva Hesse, Cindy Sherman, Kara Walker, and Andy Warhol. It brings together audience favorites as well as new acquisitions, many of which are on view at the ICA for the first time. This exhibition is organized by the ICA’s curatorial department under the leadership of Eva Respini, Barbara Lee Chief Curator. First Light: A Decade of Collecting at the ICA is on view at the ICA from Aug. 17, 2016, through Jan. 16, 2017.

About the ICA
An influential forum for multi-disciplinary arts, the Institute of Contemporary Art has been at the leading edge of art in Boston for over 75 years. Like its iconic building on Boston’s waterfront, the ICA offers new ways of engaging with the world around us. Its exhibitions and programs provide access to contemporary art, artists, and the creative process, inviting audiences of all ages and backgrounds to participate in the excitement of new art and ideas.  The ICA, located at 25 Harbor Shore Drive, is open Tuesday and Wednesday, 10 am — 5 pm; Thursday and Friday, 10 am — 9 pm; and Saturday and Sunday, 10 am — 5 pm.  Admission is $15 adults, $13 seniors and $10 students, and free for members and children 17 and under. Free admission for families at ICA Play Dates (2 adults + children 12 and under) on last Saturday of the month. For more information, call 617-478-3100 or visit our Web site at www.icaboston.org.