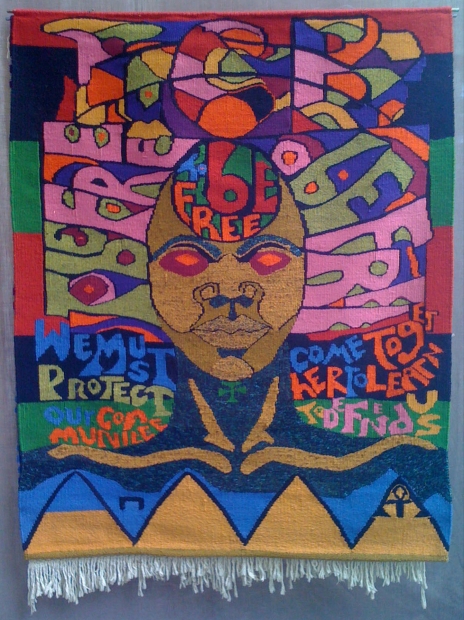 Napoleon Jones-Henderson: I Am As I Am – A Man opens at the ICA/Boston on February 17

(Boston, MA—January 25, 2022) On February 17, the Institute of Contemporary Art/Boston (ICA) will open a solo museum presentation of the work of Napoleon Jones-Henderson (b. 1943, Chicago), the most comprehensive exhibition of the artist’s work in Boston to date. For more than 50 years, Jones-Henderson has created works that strive to highlight, celebrate, and empower the communities where he lives. The artist has been based since 1974 in Roxbury, Massachusetts, where he is an influential community member, educator, and mentor.

Organized by Jeffrey De Blois, the ICA’s Assistant Curator and Publications Manager, in close collaboration with the artist, Napoleon Jones-Henderson: I Am As I Am – A Man will be on view through July 24, 2022 and feature more than 20 works from the artist’s career, including a new work created for the exhibition. This shrine-like devotional sculpture from the artist’s series “Requiem for Our Ancestors” is dedicated to writer James Baldwin. As in other shrines by Jones-Henderson, it is inspired by vernacular architecture in the American South—specifically the modest one-room shacks he photographs in his travels throughout the South—and grounded in spiritual traditions of ancestor reverence.

Jones-Henderson is a longstanding founding member of African Commune of Bad Relevant Artists (AfriCOBRA), an artist collective that came together in Chicago in 1968. His work translates AfriCOBRA’s aesthetic principles—to create images inspired by the lived experience and cultures of people of the African diaspora in an accessible graphic style—into woven tapestries, mosaic tile works, shrine-like sculptures, varied works on paper, and wearable art made in collaboration with fellow AfriCOBRA artist Barbara Jones-Hogu. His kaleidoscopic works, often focused on themes of Pan-Africanism and racial justice, aim to be self-affirming and reflective, with an eye toward both a fraught past and a liberated future.

“The ICA’s presentation of Jones-Henderson’s work is an overdue opportunity for audiences to encounter influential works from the artist’s extensive career. AfriCOBRA is a critically important artist collective that helped shape the Black Arts Movement, and Jones-Henderson is one of the group’s most significant proponents. He has exhibited his artworks widely across the country and we are honored to present them here in Boston,” said Jill Medvedow, the ICA’s Ellen Matilda Poss Director.

Napoleon Jones-Henderson brings together a suite of major works from across the artist’s career—centered around his magisterial woven textiles—displaying the breadth of his practice and the singularity of his vision. In his work, the artist alludes to African and African American culture, integrating forms from African ritual sculpture and vernacular architecture from the American South, as well as reverential references to jazz musician Duke Ellington’s ‘Sacred Concerts,’ musicians Stevie Wonder and The Blind Boys of Alabama, and writers June Jordan and James Baldwin, among others. The exhibition includes a range of influential and rarely seen tapestries and enamel on copper works alongside drawings, prints, and collages on a variety of themes both personal and cultural, and a gallery dedicated to Jones-Henderson’s Requiem shrine works, encompassing altar-like sculptures dedicated to memorializing impactful events and cultural luminaries.

“Living and working in Boston since 1974, Jones-Henderson has had a longstanding influence on the city’s cultural landscape and beyond. The exhibition at the ICA is a great opportunity for audiences to explore and learn more about the work of this important artist, who has put his practice in service of themes of Black self-determination,” said De Blois.

Thursday, March 3, 7 PM
Jones-Henderson will be in conversation with De Blois. More information will be available soon on icaboston.org.

Born in 1943 in Chicago, Jones-Henderson attended the Sorbonne, Paris, holds a B.F.A. from the School of the Art Institute of Chicago, and a M.F.A. from Maryland Institute College of Art in Baltimore. As a member of AfriCOBRA, he was included in the collective’s first exhibition Ten in Search of a Nation at the Studio Museum in Harlem in 1970, which was later presented at the Museum of the National Center of Afro-American Artists in Roxbury and the University Art Gallery at the University of Massachusetts, Amherst. More recently, his work was included in AfriCOBRA: Messages to the People at Museum of Contemporary Art, North Miami in 2018, a portion of which traveled to Venice, Italy, as AfriCOBRA: Nation Time, an official Collateral Event of the 2019 Venice Biennale. Jones-Henderson has been awarded several public art commissions, including at the Bruce C. Bolling Municipal Building in Roxbury and Roxbury Community College. He is Executive Director of the Research Institute of African and African Diaspora Arts in Roxbury, Massachusetts, where he lives and works.

Since its founding in 1936, the ICA has shared the pleasures of reflection, inspiration, imagination, and provocation that contemporary art offers with its audiences. A museum at the intersection of contemporary art and civic life, the ICA has advanced a bold vision for amplifying the artist’s voice and expanding the museum’s role as educator, incubator, and convener. Its exhibitions, performances, and educational programs provide access to the breadth and diversity of contemporary art, artists, and the creative process, inviting audiences of all ages and backgrounds to participate in the excitement of new art and ideas. The ICA is located at 25 Harbor Shore Drive, Boston, MA, 02210. The Watershed is located at 256 Marginal Street, East Boston, MA 02128. For more information, call 617-478-3100 or visit our website at icaboston.org. Follow the ICA on Facebook, Twitter, and Instagram.