Tickets are FREE and available online two days before event at 10 AM. Limit 2 per person. Please check in by 6:45 PM on night of event. Unclaimed tickets will be released 15 mins before event.
Reserve free tickets

Please note, there has been a last-minute change to this program. Due to unforeseen circumstances, Ekua Holmes is unable to participate in this lecture.

Join To Begin Again: Artists and Childhood featured artist Sharon Hayes for an intimate evening discussion of her practice as a video, performance, and sound artist. Hayes’s featured work, Ricerche: one, was filmed in Provincetown, Massachusetts, when Hayes attended an annual gathering for LGBTQ+ families. The work explores expansive ideas about nonnormative family structures and the particular challenges faced by children in queer family formations. Hayes, in conversation with Ruth Erickson, Mannion Family Senior Curator and To Begin Again organizer, will share about the ways she finds inspiration from her past and present roles as a caregiver. Being a caregiver has often been pitted against creative pursuits due to the practicalities of time, the needs of caretaking, economic realities, and more. Hayes—and Erickson—have forged new paths and new relations between professional and personal lives, however, as seen in their work at the ICA.

Sharon Hayes is an artist who uses video, performance, sound, and public sculpture to expose specific intersections between history, politics, and speech, to unspool reductive historical narratives and to re-ignite dormant pathways through which counter-understandings of the contemporary political condition can be formed. Her work sustains a distinct and vital commitment to performance and to collaboration and is devoted to the radical possibilities of non-normative occupation of public space and in holding public space as a site for unpredictable and unregulated encounters.

Hayes has had numerous solo exhibitions, including at n.b.k. (Neue Berliner Kunstverein) in Berlin, Germany (2022), Moderna Museet in Stockholm, Sweden (2019), Andrea Rosen Gallery in New York (2014), the Tanya Leighton Gallery in Berlin (2013), the Whitney Museum of American Art in New York (2012), and the Museo Nacional Centro de Arte Reina Sofia in Madrid (2012). Her work has also been exhibited at the Venice Biennale (2013), the Museum of Modern Art in New York, and the Solomon R. Guggenheim Museum. 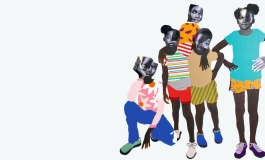