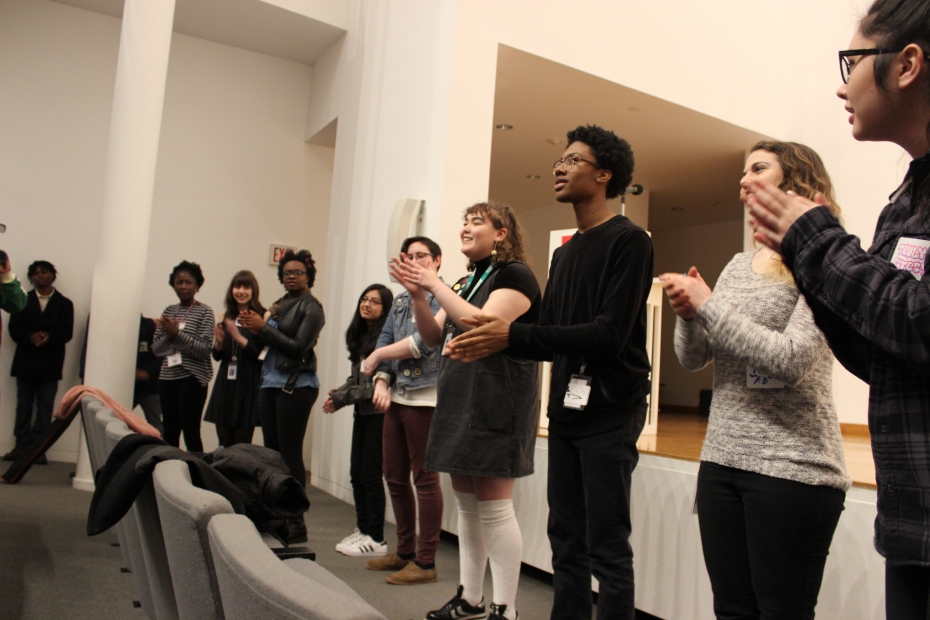 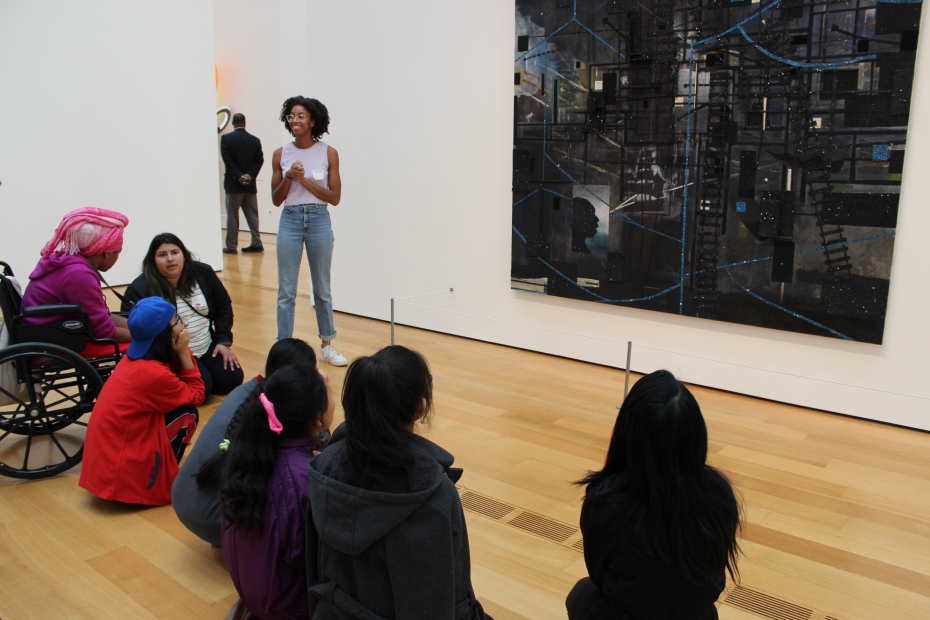 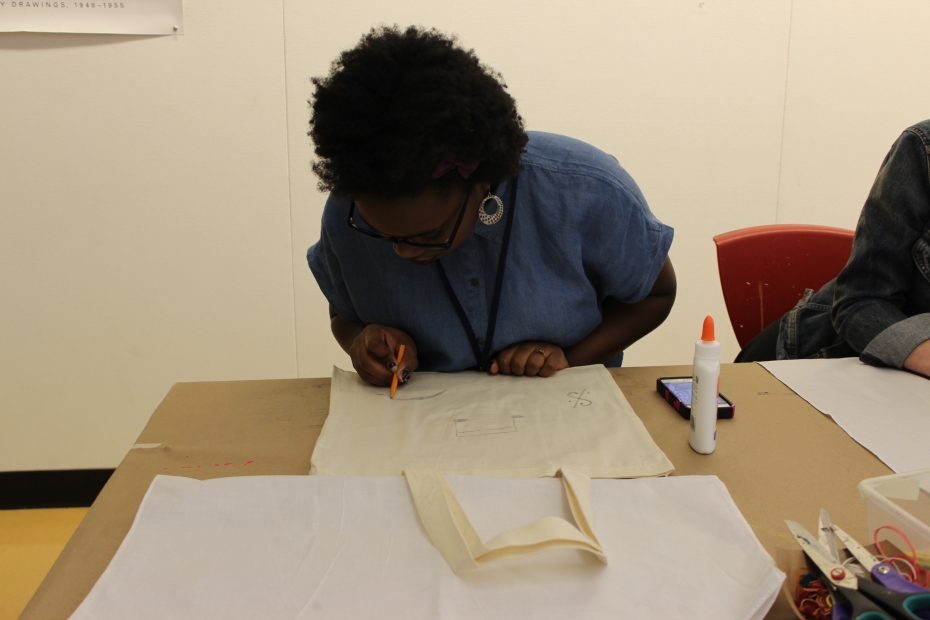 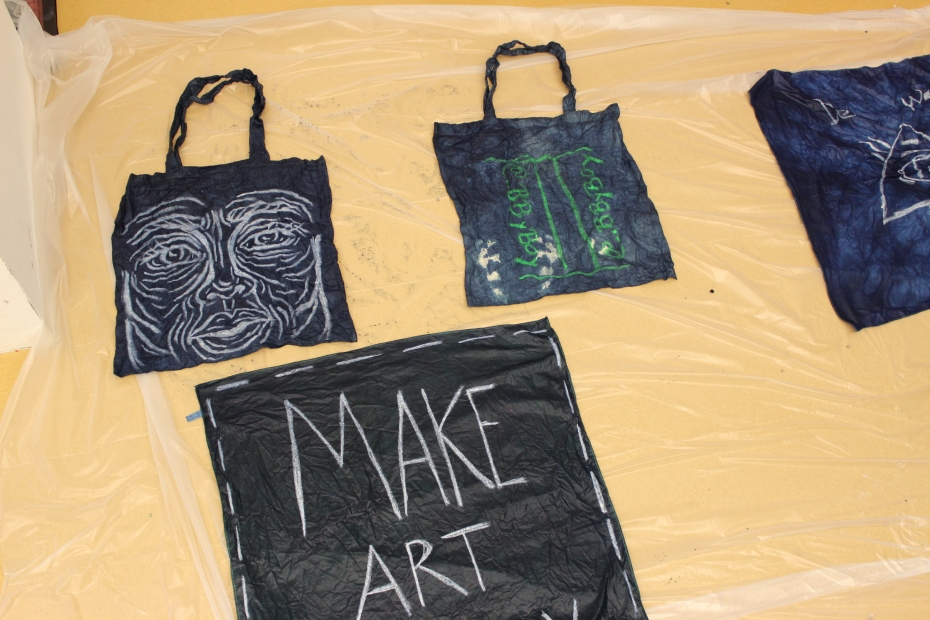 In February, the High Museum of Art hosted its second convening for teens. Over 70  teens and educators attended from local community groups including, The High Museum of Art, Alliance Theatre, My World, New American Pathways, Global youth ambassadors, Re:Imagine ATL, Chop Art, National center for Civil and Human rights, and the Boys and Girls Club. In addition, to these teen groups, we also hosted Carlie Bristow, teen programs associate at ICA Boston, home of the National Convening of Teens in the Arts.

The day began with bagels and conversation before the group headed into the Hill Auditorium on the High’s campus. The Alliance Theatre teens led an icebreaker and then each community group introduced themselves, their representatives, and shared what their organization does. Immediately following introductions, we moved into roundtable discussions facilitated by members of the High’s Teen Team. These discussions were a great way to empower teens to share their ideas and feedback.

We asked the questions:

The discussions were followed by an Indigo dying workshop and gallery tours led by teaching artists Brittaney McDermott and Christy Petterson. After the workshop we shared our take aways and next steps in the closing circle. We all agreed that spending a day together talking about our organizations and shared goals was a powerful way to build community in Atlanta and support teens.

The High Museum’s 2017 Teen Convene can be summed up with one word: unifying. Teens representing organizations across Atlanta came together on Saturday, February 4th to discuss ways to make our community more inclusive, and bond over games, art making, food, and tours. After sending representatives to a Nation Teen Convene in Boston over the summer, the High Museum organized a regional Teen Convene so that teens and organizations involved in art could meet for a day and exchange ideas. New American Pathways, Global Youth Ambassadors, My World, Reimagine ATL, Boys and Girls Club, Chop Art, The Alliance Theatre, The National Center for Civil and Human Rights, and the High museum were all represented. The topic dominated most conversation was inclusivity, as the representatives from each organization sincerely wanted to make the community a better place for those living in it. Events such as Teen Convene are especially important in the intense and divisive political climate that we are experiencing right now, because it encourages us to get out of their comfort zone and talk about controversial topics that need to be addressed, and connect with people that they may not usually have the opportunity to connect with. In the discussion groups that broke out midway through the day, we were able to share personal experiences and advice in speaking their mind, and being as open as possible to others. As a member of the High Museum’s Teen Team, I can honestly say that the lessons I learned by interacting with the organizations present at Teen Convene will follow me through the rest of my life, and allow me to be more supportive to those around me.

The thing about unity, I’ve found, is you never really think about it until you’re in one of those moments where you’re hit over the head with its weight. It changes its face, but is always somehow recognizable. Sometimes, all of a sudden, you become acutely aware of the interconnectedness of human beings—-you could be at a concert surrounded by people loving the same band or walking through a haunted house with a group of strangers. Or, as in my case, you could be freezing to death early on a Saturday morning, and, remarkably, find yourself happier for it.

Though my experience began with clinging to the fleeting warmth of my coffee, the day of the High Museum of Art’s regional Teen Convening proved to be even more fulfilling than I had imagined it would be (this is not an easy task, as days at art museums are already more fulfilling than most days spent elsewhere). We spent the day learning about the great work being done in our community by different teen-based organizations, connecting with people with whom we may never have otherwise crossed paths, and discussing topics that brought us all together.

Whether we were talking about school, art, social issues, or being a teenager in general, everyone was both interesting in their own right and genuinely interested in what the others had to say, which led to conversations so thought-provoking they felt like tangible accomplishments. By the end of the day, I had not only learned about the wide array of opportunities offered to teenagers in Atlanta, but I had met some exceptionally kind, creative kids, all with their own stories to tell and their own thoughts to bring to the table. Most importantly, however, I was reminded once again of that strange feeling of unity—-of how bright things can seem when people are brought together by a common passion, a collective experience, or even, perhaps most importantly of all, a unifying hatred of the cold.