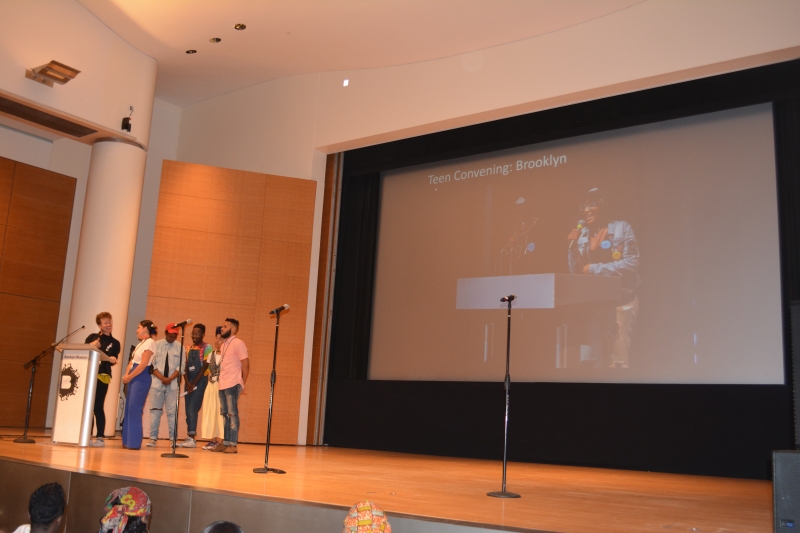 Reflection of the Teen Convening: Brooklyn Revolution of Self Expression

The Teen Convening Brooklyn planning committee made up 6 Brooklyn Museum Teen Programs Staff members planned, coordinated, and facilitated this event inspired by ICA Boston Teen Convening. The goal of our Teen Convening: Brooklyn was to empower teens to lead vital conversations about young people in the arts, which lead to the title of the Teen Convening: Brooklyn being A Revolution of Self Expression. Our Teen Convening: Brooklyn featured a program filled with different activities lead by different organizations and partners. There were four performances, three workshops centering theme of revolution, three workshops centering creative expression, 1 min intro for every organization to share about their work, gallery talks led by Brooklyn Museum Teen Staff, and breakout discussions led by Brooklyn Museum Teen Staff and Educators. While some of these activities were going on, there was also a resource fair where organizations provided more information and materials about their work. Partners included Urban Word NYC, the Brotherhood/SisterSol, Girls for Gender Equity, Earth Guardians, and A.V.O Boyz, to name a few.

This Teen Convening: Brooklyn was amazing because the program in all of its sections and parts was led by young people. This created a space where all the participants, including performers, could interact in a safe, positive environment, free from judgement. However, the most important impact the Teen Convening: Brooklyn had on me,was the fact that this convening was able to bring different amazing people, with different backgrounds, talent, passions, and creativity all to share their work and learn from each other. This was special,  because throughout the entire Teen Convening even though there was so much diversity, and different people in different stages of their lives, there was a unity that brought all of us together despite our differences, thus creating connections, and network between all the young people who participated in the event. Another interesting thing that happened was that many young people like me had the opportunity to emerge into different activities, and try new things. For example, I have always feared writing poetry, I love reading it but writing it and finding rhythm is difficult. However, in the Poetry workshop led by Urban Word NYC Slam Poetry, I felt empowered to write a poem. I felt compelled to do so by the way the 3 poets were interacting with us. They were so different from your typical English teachers, who rushed to teach through poetry. The Urban Work NYC Slam Poetry crew were able to talk about the personal connection of poetry in a unique way, that really inspired me. In the same way, all of young people’s creativity and passions were displayed throughout the whole program. For example, for the two different gallery talks happening simultaneously  (Life Death & Transformation — Shells + Music = The Sweetest sound you probably never heard, and We Wanted a Revolution: Black Radical Women, 1965-85 (led by Museum Apprentices Jorge & Isabella)), the performances having 3 Urban Word NYC Slam Poet and then a dance performance by A.V.O Boyz (Africa’s Very Own Dance Crew). The list goes on and on , but all in all this Teen Convening is an event was amazing.