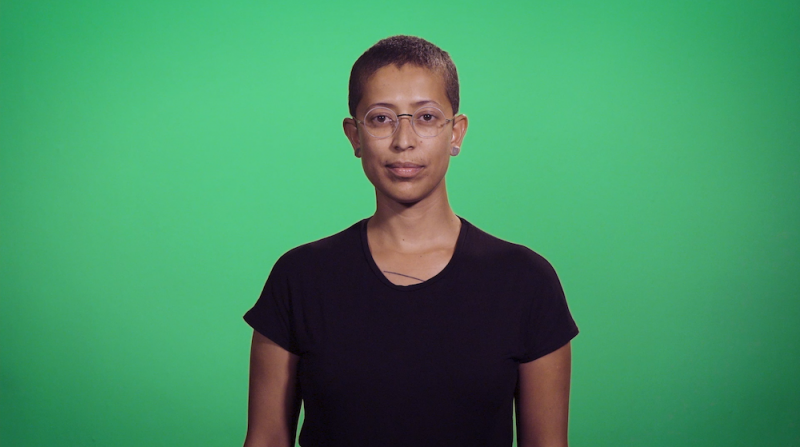 Known primarily for her large-scale video installations, Candice Breitz employs techniques drawn self-consciously from Hollywood-style filmmaking to explore how identity is represented in moving-image works and popular culture. In her 2016 video Love Story, for example, actors Alec Baldwin and Julianne Moore perform six different refugee narratives against a green screen backdrop. In a separate space, the same narratives are recounted by the refugees themselves, forcing the viewer to confront the disjunction between the artificiality of filmmaking and the perceived authenticity of the narratives. Love Story was presented at the 2017 Venice Biennale in the South African pavilion, where Breitz represented her birth country.

As in Love Story, and made afterwards in response to representing South Africa in Venice, Profile depicts individuals filmed frontally against a green screen. The ten speakers all employ a direct mode of address, claiming to be the artist herself, though Breitz does not appear and each of the individuals is in fact another South African artist. Each of the three video variations begins with a rendition of the opening lines of Diana Ross’s iconic song “I’m Coming Out.” Subsequently, elements from Breitz’s own biography are combined with contradictory statements—such as “I was born in New York City in 1950” or “I’m black”—so that it becomes difficult to discern truth from fiction, as the viewer associates the statements with the speakers, confusing any easy sense of identification. In Profile, Breitz poses incisive questions about what it means for a white artist to represent South Africa, a nation with a highly fraught history of race and representation. Profile continues Breitz’s critical interrogation of the possibility of conveying identity through an inherently fictitious medium, asking who can speak in the name of whom.

Profile bolsters the growing strength of the ICA/Boston’s holdings in video, joining major works in the collection by Sharon Hayes, Ragnar Kjartansson, Steve McQueen, and Hito Steyerl, among others. The addition of a work by Breitz also increases the global purview of the collection, joining works by South African-born Marlene Dumas to enrich the holdings of artists born in the global South.