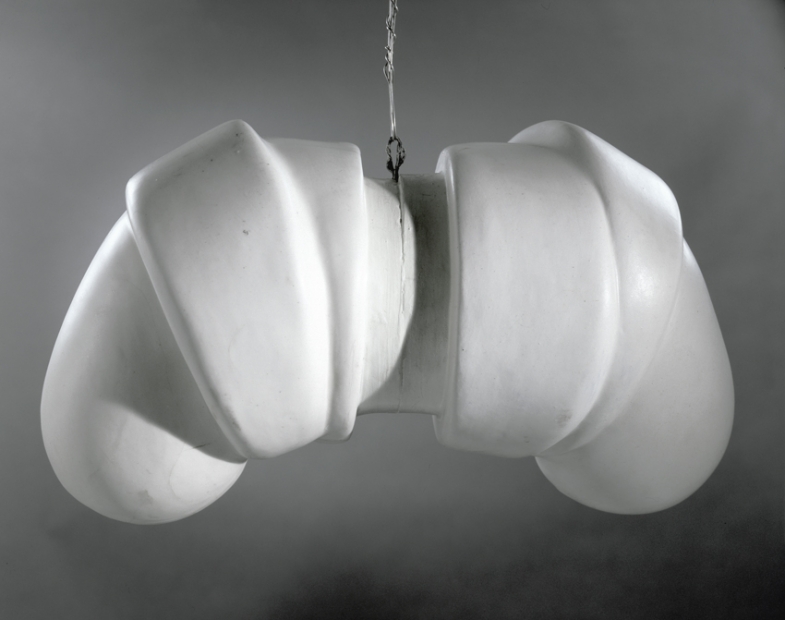 Louise Bourgeois has been creating poignant, cathartic work for more than seventy years, exploring sexuality, the human form, and traumatic events from her childhood. Janus is an evocatively corporeal object, formed out of sleekly polished, milky-hued porcelain. Bourgeois is well known for sculptural work in a variety of media, including marble, bronze, plaster, and fabric, but ceramic is a rarity in her oeuvre. After a period in the late 1950s when Bourgeois withdrew from the art world, in the 1960s she began experimenting with organic and biomorphic forms. She created six versions of Janus in 1968: five in bronze and one in porcelain. Each piece in this series is delicately suspended by a single wire, free to spin on its axis. Other hanging sculptures from this era include the amorphous painted bronze Fée Couturière, 1963, and the phallic latex-and-plaster sculpture Fillette, 1968, with which Bourgeois famously posed for her portrait by Robert Mapplethorpe in 1982. The title references the Roman god Janus, the god of gates, doorways, and beginnings and endings, who is often portrayed as having two heads facing in opposite directions. Indeed, the month of January, the beginning of each year, is named after this god. There is a sense of fragility and purity in Janus, with its smooth, clean form rendered in porcelain, in comparison to its companion pieces cast in the more fleshy bronze. A duality of meaning can often be found in Bourgeois’s work, with forms appearing at once male and female, abstract and representational, menacing and nurturing. In Janus, we see mirrored forms drooping in opposite directions from a central point, a blending of female and male anatomy that creates a disarming sculpture.

There are two versions of Janus in the ICA/Boston collection—one in porcelain and one in bronze—which enables the institution to represent a key early series by one of the most influential artists of the past century.

Partial Gift of Joan Sonnabend in memory of her husband Roger P. Sonnabend. Museum purchase through funds provided by the Sonesta Charitable Foundation Inc. and the Sonnabend Foundation.