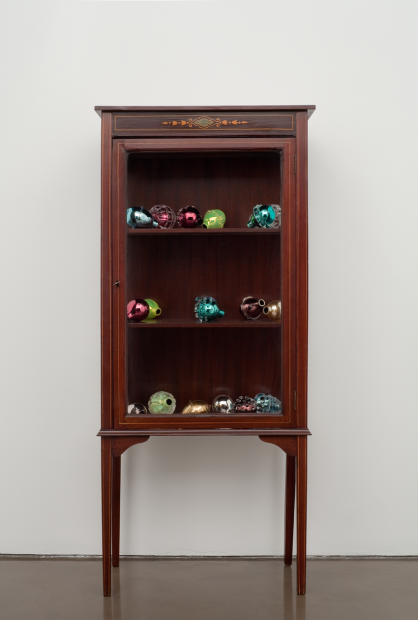 Over the course of her thirty-year career, London-based Palestinian Mona Hatoum has produced a powerfully visceral body of work. She came to notice in the 1980s for video and performance work in which her body served as the vehicle for an exploration of political and personal identity. During the 1990s, she turned her focus to ordinary household objects such as furnishings and tools, transforming them into monumental sculptures that arouse a sense of threat. With these uncanny sculptures, Hatoum divests domestic territory of its comfort and safety. As the objects that initially evoke “home” become ominous, the process inspires reflection on the global themes of exile, displacement, and conflict.

Natura Morta (Edwardian Vitrine) consists of beautifully crafted, colorful Murano glass objects arranged inside an Edwardian wooden cabinet. At first glance, the seductive mirrored-glass objects resemble crystal fruits—a pomegranate, a pineapple, or perhaps a lemon. However, these jewel-colored objects are blown and hand-shaped to resemble hand grenades, small bombs that disperse lethal fragments on detonation. By using a particularly seductive mirrored glass as the objects’ material and placing them inside a common domestic cabinet, Hatoum converts the appealing and familiar into the threatening and deadly. Her alienating treatment of the home arouses feelings of displacement that respond to the reality of many who live in the midst of constant war and violence.

This powerful work, along with others by Mona Hatoum, complements holdings in the ICA/Boston’s growing sculpture collection and in works that investigate themes of conflict and violence by artists such as Kader Attia, Louise Bourgeois, Willie Doherty, and Yasumasa Morimura.