Ragnar Kjartansson makes performance and video works that sample a wide range of cultural productions, from the sagas of his native Iceland to American blues music. Investigating the porous boundaries between reality and fiction, Kjartansson’s song-filled performances are often inspired by misheard lyrics. His videos, often humorous, destabilize traditional readings of myth, cultural history, and authenticity. A brilliant and nimble performer, Kjartansson uses music to explore the persona of the performer, whom he frequently sets against extreme conditions. In one work, the artist and a friend play rock and roll in the heart of the wintry Canadian Rockies, and in another, he croons, bare-chested, while buried waist-deep in the ground. Kjartansson also presents what can be considered “portraits” of other performers, including his mother. The artist’s lush videos—characterized by incongruous settings, repetition, endurance, and comical or nostalgic soundtracks—evoke contradictory feelings of pleasure and anxiety, humor and sincerity, sentimentality and skepticism.

The Man is a portrait of the iconic American blues musician Pinetop Perkins (1913–2011). Born in Belzoni, Mississippi, Perkins began playing guitar and piano during the emergence of the Delta blues. Kjartansson’s portrait of Perkins participates in a century-long history of white people’s celebration, and exploitation, of the innovation and perceived authenticity of black musicians. Although the setting—an upright piano situated in a field occupied only by a vacant farmhouse—is contrived by the artist, the eccentric performance is spontaneous and unedited. Frail and perhaps experiencing dementia, Perkins repeats songs and statements in an unmediated loop. Kjartansson’s video is a dual portrait of an elderly man at the end of his life and a historically important musician who is the keeper of a disappearing tradition.

The Man uniquely joins the genres of portraiture and landscape through the use of video and song. This important work adds to the diversity of the ICA/Boston’s growing collection of video work, by artists such as Kader Attia, Paul Chan, and Christian Jankowski. The Man also contributes to the ICA’s collection of photographic work by important practitioners such as Rineke Dijkstra, Nan Goldin, Catherine Opie, and Thomas Ruff, who similarly explore and challenge long-held assumptions surrounding the traditions of landscape and portraiture. 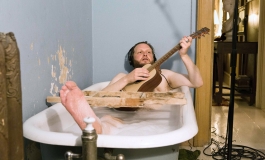