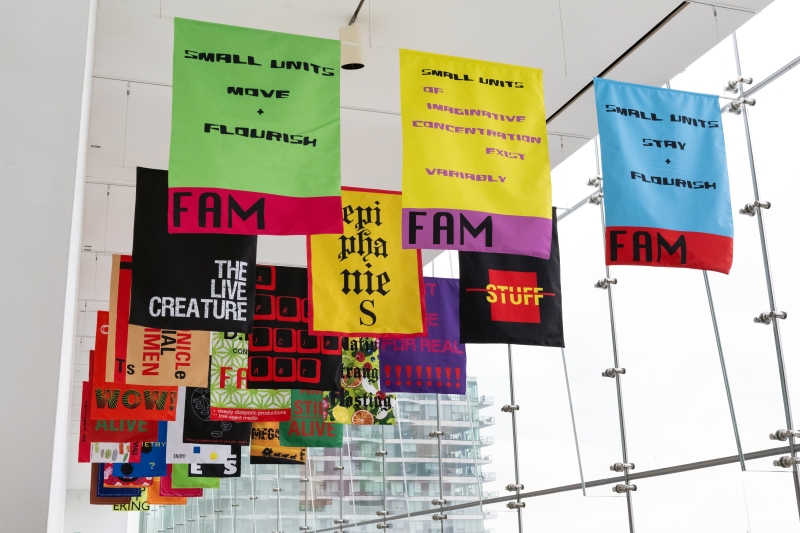 Artist, filmmaker, and writer, Renée Green is known for her densely layered artworks, from room-filling multimedia installations and essay films to sound-based works and photographs. Green’s restless approach is informed by what has been referred to as a “methodology of citation,” bringing her work into conversation with an ever-expanding group of artists, writers, architects, and more, as a way to situate her own life and experiences. In 2007, Green began making colorful hanging banners emblazoned with expressive designs, poetic phrases, and evocative names of people based on the visual language of lamppost advertisements. These Space Poems, as she calls them, are a way of organizing her thought processes at a given moment, combining her wide-ranging intellectual pursuits and patterns of associative thinking with her interest in printmaking, design, typography, and a conceptual approach to space.

The first in this series, as well as the most varied in its visual lexicon, Space Poem #1 cites cultural icons, such as musician Alice Coltrane and writer Octavia E. Butler; references artist On Kawara’s telegrammatic, text-based series I Am Still Alive; echoes political phrases, such as Human Shields or No Niche in the Megastore; and includes multiple references to Free Agent Media. Several of the banners memorialize people close to Green: the late New York gallerist Pat Hearn for instance, who attended the School of the Museum of Fine Arts and was an early exhibitor of Green’s work, and writer and editor Joe Wood Jr., Green’s friend who in 1999 went missing while hiking and birdwatching on Mount Rainier. Offering a diverse array of ideas with no prescribed order of display, Space Poem #1 comprises many of the hallmarks of Green’s expansive, multidisciplinary practice: it is a capacious consideration of language and color that transforms the viewer’s experience of architectural space.