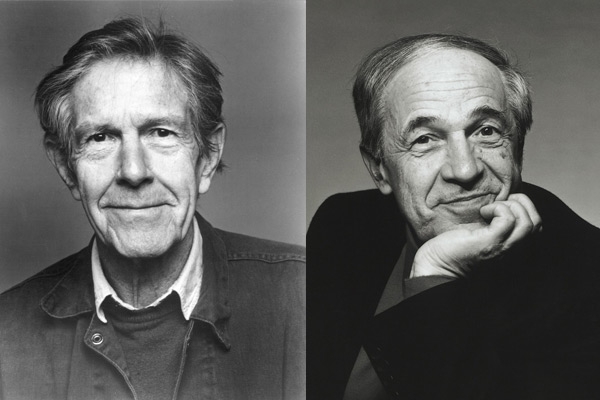 John Cage and Pierre Boulez weren’t as different as some might think.

I will never forget the typically grey evening when, as a wide-eyed freshman composition student at the Cleveland Institute of Music, I walked into Harkness Chapel on the adjacent campus of Case Western Reserve University to hear a live interview with the reigning king of contemporary music, Pierre Boulez. I remember the raspy, soft tone of his voice and how we paid rapt attention, aware of both his connection back to the old world of the late 19th century and everything he had done to bring music to where it is today. Afterward, however, my classmates and I were disappointed with the master’s half-hearted response to a question on the state of American music. He mentioned a few things about Elliott Carter, then briefly touched on the experiments of John Cage, implying that they were eventually fruitless. A few years later, during the centennial celebrations of John Cage, I began to read the correspondence between Cage and Boulez, and understand the complexity behind Boulez’s comment. This concert, presented by the ICA in collaboration with the Ensemble Intercontemporain and exploring music written by each of these composers during their extensive correspondence, brings that period to life.

To many of us entranced in contemporary and 20th-century music, the fact that John Cage and Pierre Boulez extensively corresponded tends to come as a shock. In the second half of the 20th century, when my teachers were in school, Boulez was the dominant voice in contemporary music, leader of the camp of composers who stood for a nearly mathematical approach to the control of composition that stemmed from the 12-tone technique of Arnold Schoenberg. Boulez founded IRCAM in Paris, the largest center for the study of electro-acoustic music in the world, as well as the premiere contemporary music ensemble, the Ensemble Intercontemporain. In most American academic institutions, if a young composer was not writing in the highly structured, complex method of serialism spearheaded by Boulez, they would generally have little luck earning an academic job or finding performances among an inner circle controlled by these polemicists. To other composers of that generation who wished to pursue fresh directions, the voice of John Cage was liberating. His use of chance and indeterminacy removed the ego from music that had caused these issues in the mainstream camp. Cage’s experimentation with other art forms, along with his desire to push what was possible in art and music, allowed a younger generation to feel free to write whatever they desired. Eventually, composers associated with Cage, such as Terry Riley, would begin to experiment in another direction, and Minimalist music would emerge, “saving” the discordant music of much of the 20th century.

At least that is what many people of that generation would have you believe. In fact, there is an astonishing amount of freedom in the heavily controlled music of Boulez, and a relentless amount of control in the chance and indeterminate compositions of John Cage. Realizing this, their fruitful relationship begins to make more sense. Between 1949 and 1954 the composers were in extensive contact and were excited about each other’s new ideas. Both had been incorporating ways of confining music to strict hierarchies, and in addition to their own work, much of their correspondence dealt with informing each other of the experiments in the musical avant-garde in their respective countries.

Boulez was a proponent of total serial composition, a method of composition by which every perimeter of sound production (pitch, rhythm, articulation etc.) is set into a predetermined series that dictates which events must come before others. A simple example would be if a six-pitch series were A, D, C, B, E, G; one would have to employ each of these pitches in order, either as a melodic linear material, or as a harmony, before repeating the series. The process becomes much more complex when you apply modifying operations to the series, or use series of different lengths to control rhythm vs. pitch, etc.

As Cage began to study Zen Buddhism, it led to experiments in indeterminacy and chance. In writing Music of Changes, Cage reached musical decisions by consulting the I Ching, or “Book of Changes,” an ancient Chinese divination text, and applying these results to charts of sounds, durations, tempi, densities, and dynamics. The music is freely written, without any metric system to divide the music into separate numbers of measures. It was at this point that the two composers reached unprecedented disagreements. Boulez agreed that an element of freedom needed to be introduced into strict systems of composition, and he countered Cage’s interest in chance and indeterminacy with what he called “aleatoric music.” In this type of composition a particular element is left to the performers’ control, for example in the aleatoric piece Jeux Venetiens by Polish composer Witold Lutoslawski, the conductor chooses, in an improvisatory manner, which groups of predetermined, fully notated music are played, often producing a dense sound mass. In contrast, much of Cage’s later chance music requires the composer to plot out the work in the same way that he himself wrote Music of Changes. Thus, a performer will receive a type of chart, and will be required to roll dice and conduct other chance operations in order to produce a personal score used to realize the work. Essentially, it seems that Boulez found this total lack of control disagreeable and the friendship between the two cooled. However, the discordance between them, just as their musical differences, has been overdramatized by history.

As such, this concert at the ICA is a representation of the de-polarization of the contemporary music community, as a program like this would have seemed impossible in previous generations.

—Jesse Limbacher is a composer, performer, and presenter based in Boston. He is currently interning at the ICA.