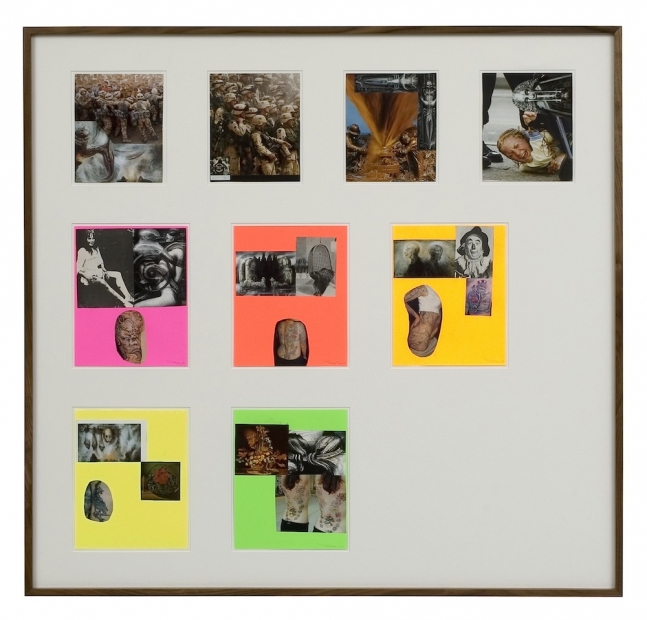 Collages catch my eye due to their multiple interpretations. They are reminiscent of magazine cutouts one might use for a scrapbook or as posters on a bedroom wall, but looking back serve deeper meanings.

During undergraduate studies, I took a few cinema studies classes that included dense, critical essays on films, genres, and authorship. The essays could often be enigmatic, just as Sterling Ruby’s works can. Without pondering them for quite a while, it can be hard to reach a full meaning. In my time spent at home during quarantine, I steadily viewed films. That time spent gave me much to think about. What I ascertain and enjoy from HRG Suite is a dreaded nature of oppression and confinement with a rebellion from the norm inside oneself.

Imagine our lives as two halves when considering this piece: one in the physical realm, the other in imaginary/thought. If we think of each frame as a person, the work presents a grid of isolated people split between worlds. For instance, happiness and the macabre merge with the Scarecrow from The Wizard of Oz alongside two forms in a dreamlike state. The Scarecrow from The Wizard of Oz is a sense of wonderment but ignorance. Alongside that are two shadow-like figures: judgement and doubt. Their facing away from each other creates a division of emotions that clouds the reach for joy. Tattoos express the person’s emotions through imagery on themselves as this confliction arises.

The colorful backgrounds mask the division of the frames. They are separate individuals with similar emotions. The Exorcist’s Linda Blair and a transformative picture of a woman embraced by a shadow figure of sorts. Someone who shows tattoos on their arm. As these two worlds of horror and change collide, a path emerges to create an image that reflects growth from trauma within oneself. Seen through the lens of film and other images, Sterling Ruby’s work creates a reflection of society of thoughts manifesting and rebellion, looking to break up the order and structure of our lives. Certainly, our natural order has been disrupted this year. While order is a natural thing, so is rebellion.

We try to create order in our minds, but as this piece is reminding me, we can also gain satisfaction from the unstructured thoughts clouding our minds, and released in physical transformations of art.

Kyle Kittredge is a Visitor Services Associate who has been working at the ICA for just over a year now. Besides appreciating the art that the museum has, he enjoys hiking in the Blue Hills area  and photographing around Boston.