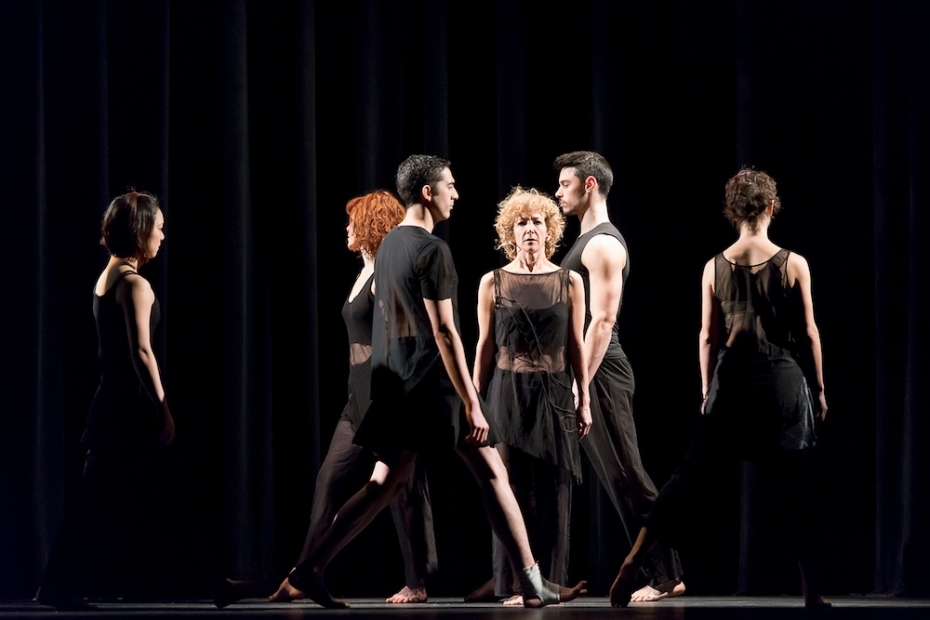 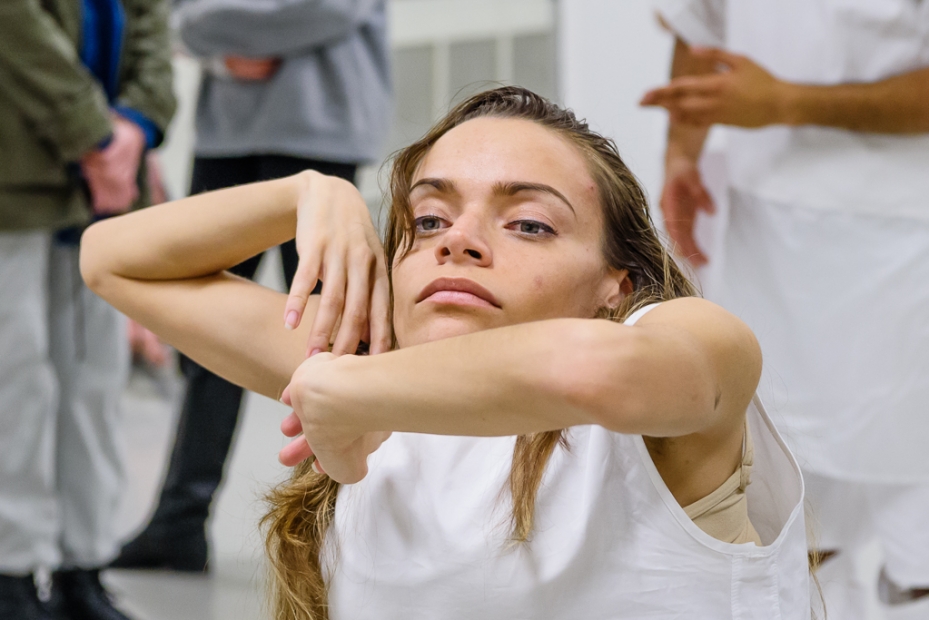 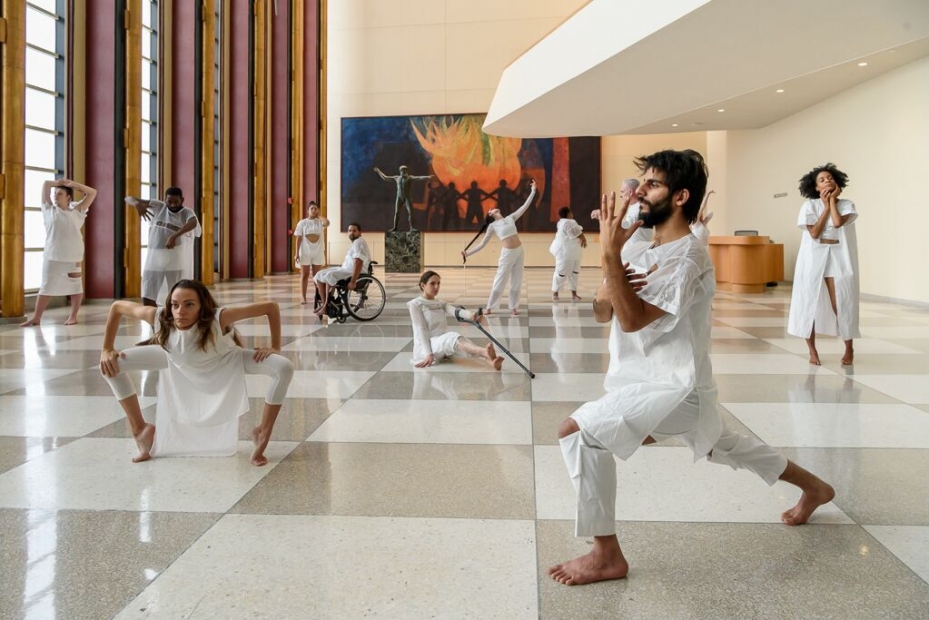 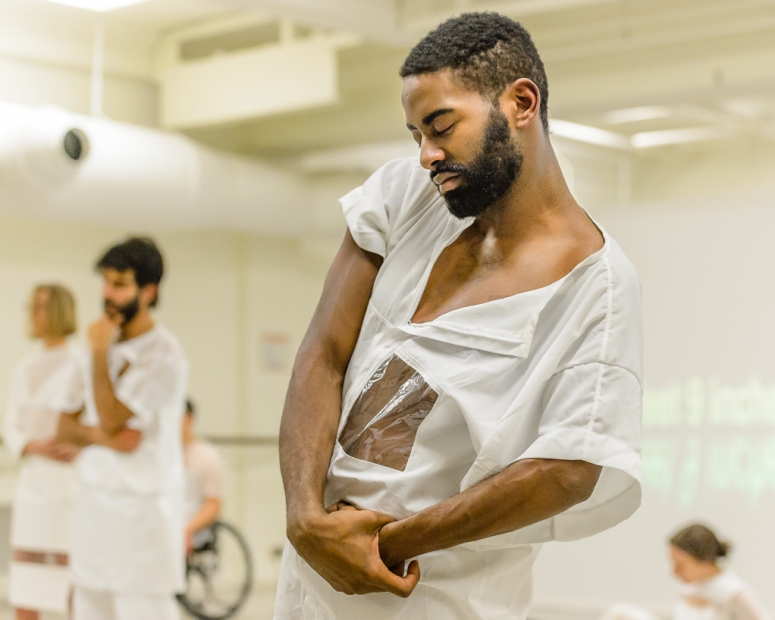 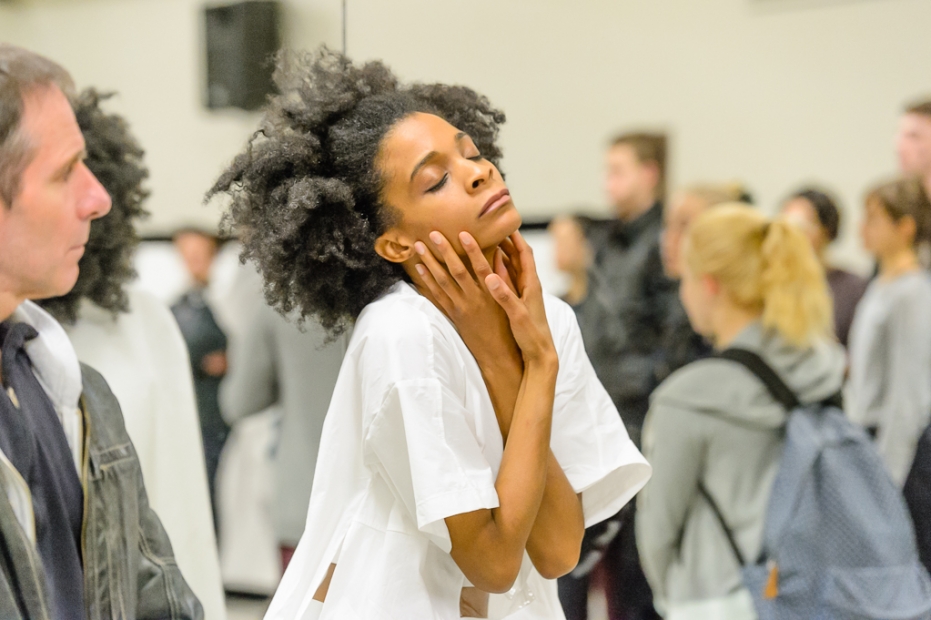 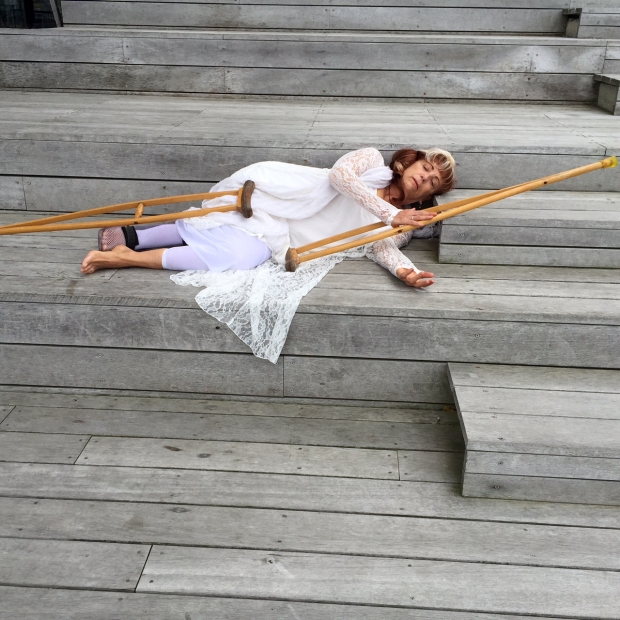 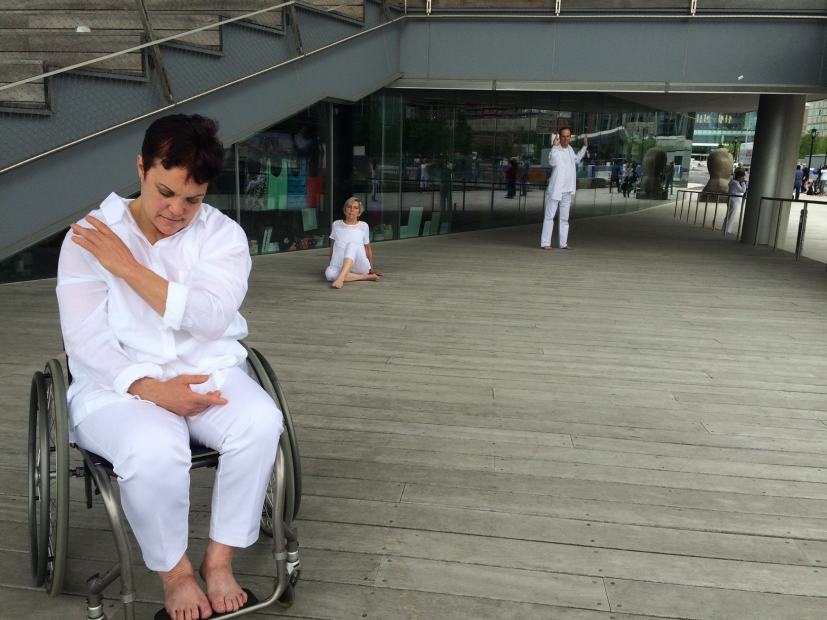 Heidi Latsky on Dancing, Disability, and Changing How We Look

The groundbreaking choreographer discusses her daring movement installation ON DISPLAY, coming to the ICA in June.

For four weekend days in June, choreographer Heidi Latsky will present her movement installation ON DISPLAY at various locations around the ICA.

ON DISPLAY confronts our tendency to judge people by their physical appearance. For four hours on each of four days, more than 30 local performers representing the dance and disability communities will place themselves on display in this commentary on the body as spectacle and society’s obsession with body image. By reverting the gaze, the performers draw attention to the complex relationship between viewer and viewed, an attention that permeates the everyday existence of people who are different in some physical way.

Latsky has had a longtime interest in dance that pushes conventional boundaries. A former dancer in the Bill T. Jones/Arnie Zane Dance Company, she has presented work at the ICA on two previous occasions: in 2009, when she presented the groundbreaking GIMP Project, for disabled and nondisabled dancers, and in 2011 as part of a reunion of Bill T. Jones/Arnie Zane Dance Company dancers.

For International Day for Persons with Disabilities on December 3, Latsky is working to organize a worldwide event in which local groups all over the world will present ON DISPLAY in their own communities.

The ICA spoke with Latsky about ON DISPLAY.

How did you get interested in working with people with disabilities?

It’s a Boston story, actually. Jeremy Alliger invited me to go to his International Festival of Wheelchair Dance there, but I didn’t understand it, and I never went. Then in 2006, he met a visual artist who was a bilateral amputee—she had no fingers and no lower legs—who had just gotten a grant to make a solo for herself and perform it. She didn’t have a lot of training, and she really didn’t know how she was going to do it, so she wanted to find a choreographer to work with. Jeremy thought I might be interested in this project, and I grabbed the opportunity. I talked to her on the phone, I loved her voice, and then I met with her in New York for the first time for lunch.

As I was walking into the restaurant, I thought, I’m going to have lunch with someone I don’t know, who has no fingers. And then I was up against that whole thing: Do I look? Do I not look? Do I say something? Do I not say something? Do I acknowledge the fact that her hands look different? But I didn’t have to worry, because she was so gracious and put me immediately at ease. So we started the work process, and through that process, she became my muse. I kind of fell in love with her. I had such an interesting time creating this 25-minute solo for this woman and learning about the disability community—I didn’t know anything about disability—and I started wondering, could I do this again? And that was the beginning of the GIMP Project.

Isn’t it interesting that the onus is often on the person who is different to put the other at ease?

I can’t even remember how she did it, but I think she just acknowledged her disability, and we got it out in the open and then we could get past it. It was my issue that I hadn’t ever met anybody with a disability that I knew of, and I was uncomfortable. But the more I was exposed to people with disabilities, the easier it became. And that’s a lot of what I’m trying to do with my work: expose people to people with all kinds of bodies, on stage or in an art installation, with the hopes that seeing a diverse group will redefine what they see as beautiful, or virtuosic—to shatter stereotypes, have people see things in a different way.

How did ON DISPLAY come about?

In 2009 I received a Creative Capital grant, and as part of that grant they invite you to a retreat where you give a seven-minute presentation to an audience of funders, presenters, and fellow artists. I can talk about my work at great length, but in my experience, people don’t really get it unless they see a visual. There are so many preconceived notions of the kind of dancers I have and what it means when you say disabled or nondisabled. So for the presentation it was important for me to show a five-minute clip of GIMP.

A museum curator sought me out afterwards and confessed that he was very ashamed of his response to the video. He said he saw the inherent beauty of a sculpture with an atypical shape, but he could not experience that with a real person.

As he expressed both shame and fascination, I more fully comprehended the complexity of his reactions. He’d been living in museums for so long, and really appreciating and thinking how beautiful the artifacts are—some of which are bodies without arms or limbs—and then when he saw a real person, in a film, who only had one arm, he was repulsed. He was compelled, and saw the beauty in it, but also repulsed.

When I heard that, something clicked in my head. I thought, what would happen if these sculptures were real people? Would that help people shift their perceptions about beauty? ON DISPLAY developed as a vehicle to address what I perceived as this common response to my work.

Initially I was thinking we could have real people alongside sculptures, in a museum. I was toying with the idea of a sculpture garden, or if it was indoors, a sculpture court—that was actually David Henry’s idea [David Henry is Bill T. Jones Director of Performing and Media Arts at the ICA]. Then for the 25th anniversary of the Americans with Disabilities Act in 2015, I went into partnership with the New York City Mayor’s Office, specifically the Commissioner for People with Disabilities; he wanted to have events all throughout the city to expose the public to people with disabilities. So I started doing this sculpture court, in Times Square, in Chinatown, on the High Line, in Brooklyn Bridge Park. I also made a more elaborate version of ON DISPLAY, which included a film and a score that’s like a ticker tape of objective physical descriptions of 30 different people recited in a robotic voice. (The text also appears on a screen.) That version is much more choreographed, with dancers moving on certain prompts. It’s about a 20-minute set, and when the words go really slowly across the screen, the dancers move really slowly as well. That’s the full version of ON DISPLAY.

The sculpture courts, like we’re doing at the ICA, are beautifully elegant in their simplicity. They’re performed in silence. The cast or sculptures are unified by wearing white because white represents/reflects all colors.

It seems like it must be really intense for the performers.

I have a group of 35 performers, some of whom had never performed before, and mostly not dancers. Every time I reach out to them, they want to do it. It’s truly a meditative experience, because once they drop into the task, they aren’t listening to anybody but themselves. When they’re all breathing together, when it falls into place, it feels like they’re a real community, and it feels really good. The only complaint I’ve ever had is when we’ve been on a cold, hard ground, like standing in Times Square barefoot.

It’s not difficult to be so on display?

That’s the beauty of it—they’re out there being watched, but they’re also watching. So the viewers become the viewed, and the relationship keeps shifting.

So the performers really respond to their surroundings.

Each person chooses how they respond to their surroundings in their own way and within the structure of the improvisation. We’re creating a real sculpture court, where people can walk around and get close to the performers. We encourage people to take photos and post about it and talk about it online. When a performer opens their eyes, it’s possible that somebody’s right there. And they have the choice of continuing to look at them, or closing their eyes and moving again.

The other day a viewer said that at first it felt like the performers were very uniform, but then everybody’s choices – how they opened and closed their eyes, how their body was moving – were so unique to each person. It made me really happy that she got that, because that’s what it’s about.

And the group is a combination of dancers and non-dancers?

That’s wonderful. So you look for a range of body types as well?

Yeah. For our performance at the NYU Skirball Center, we had a woman who was eight months pregnant. She was huge, and it was amazing. She loved doing it and I loved having her pregnant state out there in all its glory. In addition, that cast of 30 included performers from Indian and African American heritages, your typical very tall model person, a couple of deaf actors, a burn victim, wheelchair users, a transgender person, people with cerebral palsy, older people, heavyset people, little people. It was really diverse, although I think sometimes people don’t see the uniqueness of each individual until they watch for a while. That’s why we encourage viewers to really take their time, find their favorite person, photograph them, experience them. 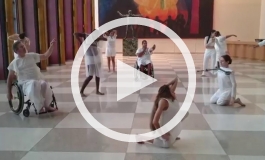 Disability "On Display" at the UN: a dance project by Heidi Latsky 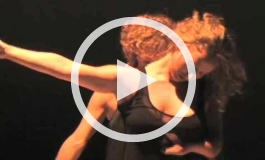