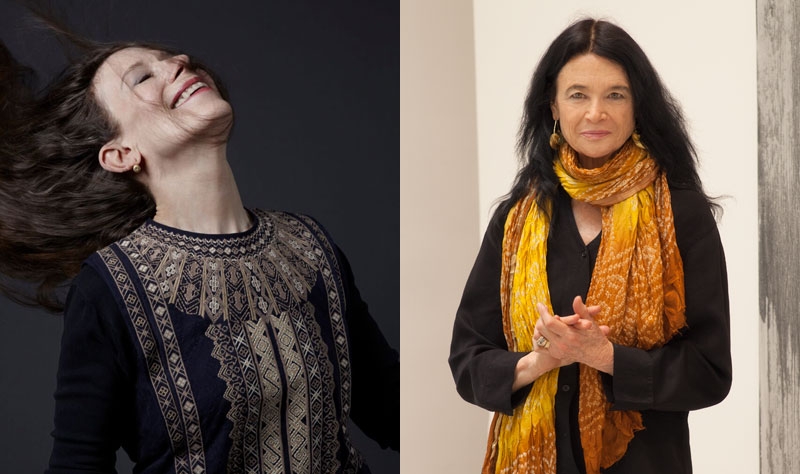 Meredith Monk and Anne Waldman at the ICA: A Q+A with Performing Arts Curator John Andress

“Meredith Monk is a legend.”

This February, the ICA brings the incomparable vocalist, composer, and multidisciplinary artist Meredith Monk to Boston for the first time in more than twenty years. She will be joined onstage by the celebrated poet Anne Waldman, a leader in the beat and experimental poetry scenes since the 1960s.

Now 74, Monk has been a mainstay of experimental music and performance for more than 50 years, creating multi-disciplinary works that combine music, theater, movement, and film since the 1960s. A pioneer in “extended vocal technique,” she has broken ground in exploring the voice as an instrument that she believes can “unearth feelings, energies, and memories for which there are no words.”

Beloved by audiences and lauded by critics, Monk is the winner of the National Medal of Arts, a MacArthur “genius” grant, and several Guggenheim Fellowships.

She released her most recent album, On Behalf of Nature—a meditation on ecology and climate change that the New Yorker called “visceral and ethereal, raw and rapt”—in November 2016.

Anne Waldman, a prolific poet, playwright, activist; the recipient of multiple awards; and the author of more than 40 collections of poetry and poetics, including Fast Speaking Woman (1975) and Marriage: A Sentence (2000), was a founder and director of The Poetry Project at St. Mark’s Church in New York and co-founded with Allen Ginsberg the Jack Kerouac School of Disembodied Poetics at Naropa University in Boulder, Colorado.

Waldman kicks off the evening in three parts with a performative reading from her “Entanglement Variations,” with visuals of paintings by Pat Steir and sound composition by Ambrose Bye. Monk will then perform several selections of her work with members of her longstanding Vocal Ensemble. The evening culminates in an original collaborative duet between the two artists.

We spoke with John Andress, Curator of Performing Arts and a musician himself, about these phenomenal artists and what we might expect from their performance.

Recently promoted to Curator of Performing Arts, you’ve been doing the music programming at the ICA, among other things, for several years. What do you look for when choosing acts to bring to the ICA?

I respond enthusiastically to artists who create a new and unique landscape, either sonically or visually, that I, as the viewer or listener, can enter. Through extraordinary, detailed, and rigorous invention, the artists I most admire devise a theatrical world that is uniquely original. During a live performance, the artist and audience step into what seems like a new universe together, where the confines of the theater dissolve, time stops, and it feels like the work is created right in that moment. That quality is incredibly difficult to achieve, but when it does, it’s electric.

This season we’re featuring Meredith Monk, one of the most celebrated experimental musicians and cross-disciplinary artists of her generation. Why is she a good fit for the ICA?

Meredith Monk is a legend; a genius, according to the MacArthur Foundation. And she has not performed in Boston in more than two decades! That alone seems reason enough to present her work at the ICA. But setting aside the numerous awards and accolades she has received throughout her 50 year career, Monk is a unique and singular figure in music. She is a vocalist, a composer, and an interdisciplinary artist, creating solos, chamber pieces, multimedia operas, and orchestral works—and her incredible extended vocal techniques have expanded the possibilities of composition for the voice. Her work cannot be labeled as merely classical, experimental, or vocal; it exists beyond the boundaries of a single genre.

Monk has quite an unusual way of composing, and of notating, music. Can you talk about that?

When composing, Monk brings fragments of ideas to rehearsals—maps or cells—rather than a notated score. Working closely with her fellow singers, the Meredith Monk Vocal Ensemble, the musicians improvise, investigate, and manipulate Monk’s ideas, crafting the work through collaborative exploration. Though it can be transcribed into a proper notated score, the music exists most accurately and viscerally in the body of the performer, much like the way a choreographer makes work with a company of dancers.

Monk’s work is unusually difficult to categorize—in 2012, the Guardian called her unclassifiable—but can you talk about some of the wells she’s drawing from?

In that same Guardian article, Monk’s music is described as simultaneously ancient and modern. It’s as if the sounds were pulled from the past while foreseeing the future. Monk rose to prominence in the 1970s and has often been compared to other minimalist composers like Phillip Glass and Steve Reich, but her music emphasizes ritual and repetition in a way that almost feels liturgical.

In this performance, she’ll be joined by Anne Waldman, the acclaimed poet, activist, educator, performer, and committed collaborator. How important is the act of collaboration to the work of these two artists?

Throughout their careers, both artists have routinely collaborated with colleagues working in other genres. Waldman has worked with visual artists Richard Tuttle and Elizabeth Murray, the dancer Douglas Dunn, and musicians Don Cherry and Steve Lacey. Monk has collaborated with visual artist Ann Hamilton, filmmaker and dancer Shen Wei, and, of course, numerous musicians. I think for both artists collaboration acts as a catalyst and opens up new possibilities and creative pathways to follow.

What will you be looking and listening for at the performance?

First and foremost, I’m excited to see two peerless artists perform together at the ICA. Both Waldman and Monk have been extraordinarily influential in their respective fields, inspiring their contemporaries and forging new paths for younger poets and musicians. What kind of magical alchemy will occur when they perform together? I, for one, am eager to see.