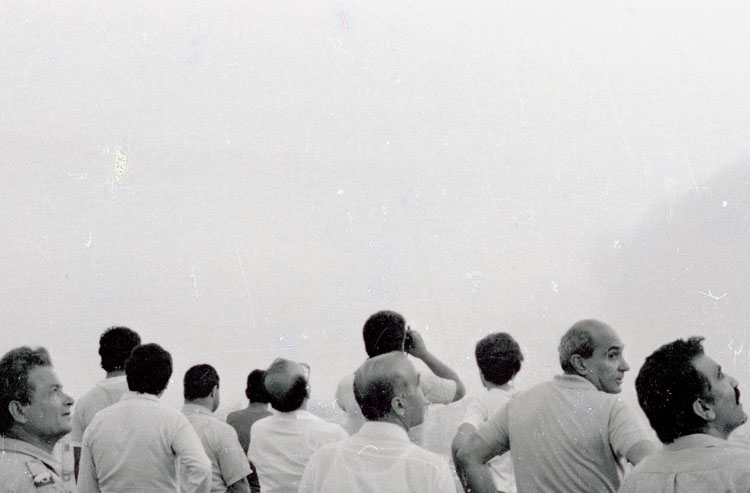 Walid Raad, We decided to let them say “we are convinced” twice. It was more convincing this way, 1982/2004, pigmented inkjet print, 44 x 67 inches. Courtesy the artist and Sfeir-Semler Gallery, Beirut/Hamburg. © 2015 Walid Raad

The artist uses photography, sculpture, performance, and collage to probe the construction of history—but the heart of his work is storytelling.

Informed by his upbringing in Beirut during the Lebanese civil war (1975–1990), artist Walid Raad has spent the past 25 years exploring the ways we represent, remember, and make sense of history. Walid Raad, the artist’s first comprehensive North American museum survey, brings together work in photography, video, sculpture, and performance dedicated to themes of veracity, authority, and ownership in the construction of histories and art.

For Eva Respini, the Barbara Lee Chief Curator at the ICA, storytelling is the heart of the artist’s perceptive and thought-provoking work. She talks about constructing histories, the slippery nature of truth, and why Raad’s work feels especially prescient today below.

What drew you to Walid Raad’s work? Why did you choose to present this work at this time?

I have known and followed Raad’s work for more than a decade. The first time I encountered it was through a lecture he gave in 2002 in New York City. I thought I was attending a regular artist talk, and what unfolded was an intricately constructed lecture that wove elements of history (specifically the civil war in the artist’s home country Lebanon), with flights of fancy and fictional characters. He used the apparatus of the archive (that is, archival photographs, video testimonies, and documents) to create his own account of the experience of war and trauma. I was blown away by his storytelling and his probing capacity to question what we understand as fact. The United States has been involved in a series of conflicts in the Middle East since the first Gulf War in the 1990s, and we are acutely aware of the various ongoing conflicts all over the globe. We receive images, reports, and news of these events at lightning speed, whether online or through the 24-hour news cycle. But in the era of Photoshop, we all understand that images, videos, and documents can be manipulated to support a certain narrative or version of events. What become the indelible images that represent history? What are the stories and facts that emerge as the official accounts of history? Who has the authority to tell those histories? His work deals with these urgent questions, and it is in this context that Raad’s work is more relevant than ever.

This exhibition was originally organized for the Museum of Modern Art in New York, for a different audience and very different spaces. How do you think the exhibition will “translate” or differ from one space to another?

Walid Raad opened at MoMA in October. Some of the images in the exhibition gained a new resonance after the terrorist attacks on Paris in November—both because Raad pictures iconic Parisian sites and because the attack on a Western city provoked renewed thinking about the realities of living amid fear and unrest. Have current events altered the discussion around the exhibition and the work, or your own understanding of it?

Because Raad’s work deals with some historical events, current events do impact the reading and understanding of his work. In addition to the events in Paris this fall, we also saw terrorist attacks in Istanbul and Beirut, as well as reports of the destruction by ISIS of significant cultural monuments, such a Palmyra. In our own context in Boston, the events of the marathon bombing are still viscerally felt. While these specific events do not directly inform Raad’s work, his explorations of the effects of conflict and trauma seem sadly prescient nevertheless.

How is Walid’s work received and read in Lebanon and the Middle East as opposed to in the United States? How much familiarity with Lebanese culture and history does a viewer need to appreciate the work?

A viewer need not know the history of Lebanon or the Middle East to engage with this art; at its heart is a coming-to-terms with the limits of directly capturing history through images or words. This is an issue we can all relate to, especially in Boston, a town steeped in history. Investigating how photographs, moving images, documents, and first-person narratives confer authenticity on official histories, be they histories of war or of art, Raad’s work weaves elements of the past, the present, and the future to build narratives that question how history, memory, and geopolitical relationships are constructed.

Raad refers to experiences growing up during Lebanon’s civil war—collecting bullet casings on the street, for example, or misinterpreting the news. While thematically and intellectually sophisticated, the work also blurs fact and fiction, reality and imagination. Does this element of his work relate to the fact that he came of age during a time of conflict?

Yes, that experience of trauma directly relates to his work. But he is an artist, not a journalist. While the work is rooted in historical fact, it is essentially about the relationship between image and language, memory and lived experiences, and the slippery nature of truth. In his work, Raad proceeds from facts. But as he says, there are different kinds of facts. Some facts tend to be historical. Some facts are emotional. And some facts are aesthetic. An artwork is an interesting instance in which one may be able to maintain all these facts in their continuum and their complexity. Raad’s two bodies of work tell a complex composite truth stretching beyond historical fact, and both rely on storytelling and performance to activate imaginary narratives. Parsing fact from fiction is beside the point.

Walid Raad is an organizer of Gulf Labor, a coalition of artists and activists raising awareness of living and working conditions on Abu Dhabi’s Saadiyat Island, where a massive cultural district, home to future Louvre and Guggenheim outposts, is being developed. Last May, he released a statement about relations with the United Arab Emirates after being barred entry due to “security reasons.” In response, more than 60 art-world professionals, including yourself and Jill Medvedow, Ellen Matilda Poss Director of the ICA, signed a letter to the UAE and the arts institutions building in the Gulf region opposing any existing travel bans. Have there been any new developments? Have relations improved since? How relevant is this activism to Raad’s artwork?

Sadly, at the time of this writing, Raad is still not able to travel to the United Arab Emirates. I have a deep respect for his work as an activist, but the work of activism and art are separate for this artist. Raad clearly makes this distinction when talking about his activist work. Gulf Labor—which includes journalists, artists, and activists—are in ongoing conversations with various institutions in the Gulf, and we will continue to learn more as the events unfold. I hope that the work of Gulf Labor will result in ameliorated working conditions for those building these important cultural institutions.

Raad was recently awarded the International Center of Photography’s 2016 Infinity Award, which recognizes “major contributions and emerging talent in the fields of photojournalism, art, fashion photography, and publishing.” Raad’s practice is grounded in photography but spills into sculpture, collage, performance, and conceptual practice. What do you think is his greatest contribution to contemporary visual art?

Raad works fluidly in a variety of mediums, but I would say at the heart of his work is storytelling, and that is one of the most significant contributions he has made to contemporary art. For Raad, the relationship between image and text is key to unlocking how photographs, videos, and documents occupy the public sphere. He activates this relationship, this interdependence, through wall texts written in the first-person voice or in the guise of a fictive character. His works are further illuminated by frequent lecture performances wherein Raad adopts the persona of a scholar or artist. It is through these literary acts—the performance monologue or wall-text narrative—that that the work truly comes into its own. In fact, its success hinges on our need to believe in official narratives. 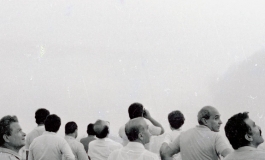