“A timely exhibition…frames questions about the most basic human values.”

One of the defining artists of her generation, Catherine Opie is known for her portraits and landscapes. In this exhibition, Opie’s photographs explore the intimate relations between community and politics, citizens and the landscape, offering a dynamic portrait of the United States at the dawn of the 21st century.

The series Inauguration documents the enormous crowds that convened in Washington, DC, for President Barack Obama’s inauguration. Shot against a landscape of pale winter light and bare trees, Opie’s photographs capture moments of individual emotion on a day that recognized the hopes and voices of an American majority.

Other works capture the Michigan Womyn’s Music Festival and the annual convening of the Boy Scouts of America, which further Opie’s interest in the specific use made of the landscape, as well as her ideas about the variety of ideals and beliefs held by Americans in their pursuit of a meaningful life. These lush and pastoral images are held in contrast with those of political protests in urban areas, notably Tea Party rallies, pro-immigration marches, and anti-war demonstrations.

Installed around the perimeter of the ICA gallery is a series of devastatingly beautiful images of the ocean. These images, from a body of work called Twelve Miles to the Horizon, were taken over a period of 10 days—one at sunrise, and one sunset—from the deck of a massive container ship making the passage from Busan, Korea, to Long Beach, California. These radically unpopulated pictures, all shot from the same horizon line, are feats of technical precision and sublime beauty; their “emptiness” stands in stark contrast to the fullness of the political pictures.

Despite the formal differences between the two “types” of images on view in Empty and Full, there is also a strain of continuity. In each body of work, Opie suggests a profound level of interconnection and interdependence that people have not only with one another, but with the spaces we collectively inhabit. 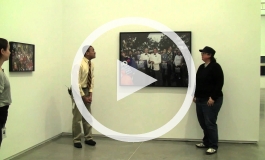 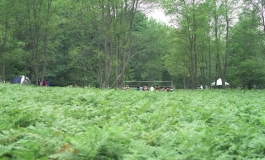