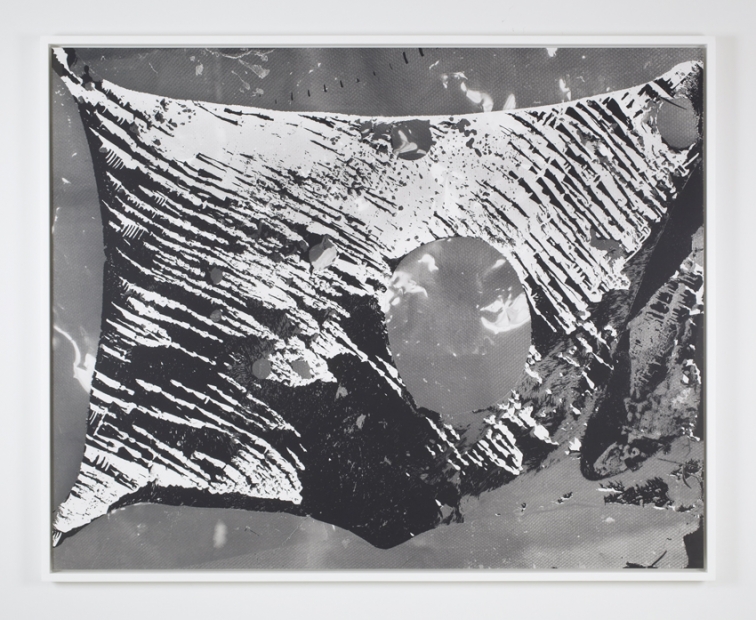 A Ground in the Air

Eileen Quinlan’s staged and evocative photographs consider how the hand of the artist expresses itself in the photographic medium. Her work touches upon a wide range of subjects, from feminism, parenting, and aging to “screen culture” and existentialism. Early in her career, Quinlan was interested in the seductive qualities of a photograph: for example, how advertisements enticingly stage products to stimulate desire. This was part of Quinlan’s broader interest in “constructed” or, as the artist declares, “non-straight” images. Her images are not “trafficking in truth” but rather explore intervention and subjectivity through process and experimentation.

A Ground in the Air, whose title comes from a biography of the 19th century photographer Nadar, is a near-accidental composition combining multiple strategies. The artist shot a piece of canvas hanging on the wall with 4x5 Polaroid-type 55 film, and then manipulated the physical negatives to create the photograph. She etched on the negatives, stuck them together when they were wet, and then pulled them apart once dried, breaking the emulsion. The artist’s experimental process creates a palpable dynamism throughout the composition, particularly with the inscribed etches and the corners of this odd central “shape” pointing outside of the frame. The scratches and tears—both literal and visual—may echo Roland Barthes’ idea of the punctum in his seminal text Camera Lucida as something that grabs and affects viewers. A Ground in the Air, along with many of the artist’s other works, are more than what they appear, enticing you to consider and look closely as the work.

The ICA/Boston organized Quinlan’s first solo museum presentation in 2009, marking the museum’s early commitment to this artist. Within the museum’s strong collection of photography, this seemingly non-figurative work by Quinlan diversifies our holdings. The artist’s focus on process and composition possesses a painterly intuition, bringing this work into dialogue with photographic works by Sandro Cinto and collages by Charline von Heyl.

Momentum 13: Eileen Quinlan: My eyes can only look at you