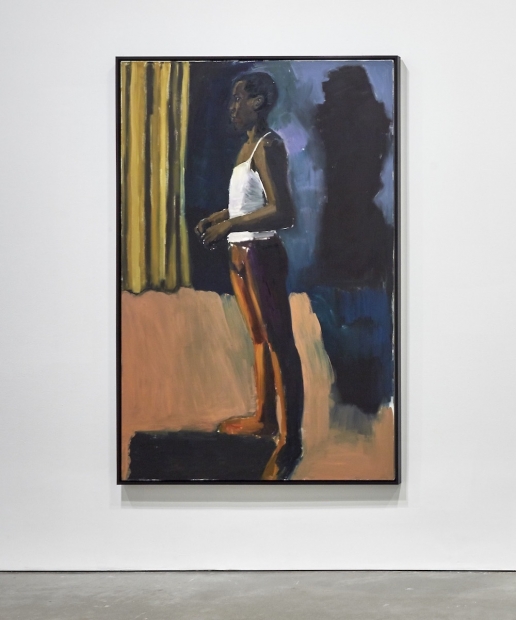 The paintings of British-Ghanaian artist and writer Lynette Yiadom-Boakye, feature imagined characters and narratives, and reveal a sense of poetry and emotional depth in everyday scenes. Nearly all of her paintings begin with a formal problem—painterly questions of light, color, and composition. The characters she enlivens come out of a process of collaging into sketchbooks images taken from printed matter. These imagistic sketches create an armature on which she improvises, simultaneously addressing formal problems and representing the world as she sees it.

The dancer in The Much-Vaunted Air is portrayed in profile ready and waiting in the wings, his arms bent at the elbows and his resolute gaze fixed on the proscenium, just outside our field of view. The off-stage space in the painting is largely nondescript, the floor and walls are delineated roughly with gestural swaths of peach, black, blue, and lavender paint, unresolved passages that evoke the canvases of Édouard Manet. On the left side is the stage’s golden yellow curtain, and behind the dancer to the right, his shadow is cast on the wall from theatrical lighting that causes his legs to glow. Dancers recur as a motif throughout Yiadom-Boakye’s work, and the composed elegance of these figures in her works recall Edgar Degas’s ballerinas. Yiadom-Boakye has said that she seeks to “make people intelligible through paint.” “Although they are not real I think of them as people known to me,” the artist has said. “They are imbued with a power of their own; they have a resonance—something emphatic and otherworldly. I admire them for their strength, their moral fiber.” Like the other figures in Yiadom-Boakye’s paintings, the dancer in The Much-Vaunted Air is at ease, a political and reparative gesture toward representing black subjects as they might be in the world.

The Much-Vaunted Air joins important works in the collection by Henry Taylor, Lorna Simpson, Steve McQueen, and Ellen Gallagher that deal with black identity and the politics of representation. Yiadom-Boakye’s unique take on figurative painting and portraiture adds to the depth of the museum’s holdings of that genre of painting, including key works by Marlene Dumas, Chantal Joffe, Alice Neel, and Lisa Yuskavage.