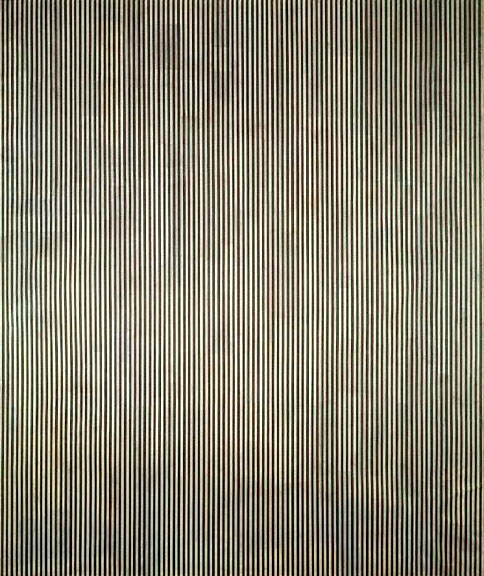 Philip Taaffe has forged an unorthodox approach to painting, employing linocuts, paint, and canvas to produce exotic and compelling images that bring to mind Matisse’s cutouts or Synthetic Cubist collage. Emerging during the 1980s alongside such painters as Ross Bleckner, Peter Halley, and Lari Pittman, Taaffe was initially positioned in line with the Pattern and Decoration artists of the late 1970s. The “abstract assemblage” work of these artists ran counter to painters such as Julian Schnabel and Francesco Clemente, who returned to the figure in their large-scale paintings. In his paintings from the 1980s, Taaffe appropriates motifs and gestures from abstract painting: one discovers gestures quoted from Ellsworth Kelly, Barnett Newman, Jackson Pollock, and Bridget Riley.

Untitled III makes a particular nod to Riley’s use of black-and-white lines to create optical effects. Composed of striped, linoprinted paper, the work is a collage. Taaffe has cut or torn sheets of paper and then joined them to seamlessly craft unbroken lines. Created with no actual paint, Untitled III is an early work by Taaffe and demonstrates his experimentation with appropriated material—in this case, printed paper—to create singular works in dialogue with painting. The work’s surface creates undulations that generate striking visual effects.

Taaffe’s Untitled III makes a significant contribution to the museum’s modest collection of large-scale paintings. It joins works by other iconic artists of the 1980s, such as Dara Birnbaum, as well as major paintings by artists like Kai Althoff and Lucy McKenzie.