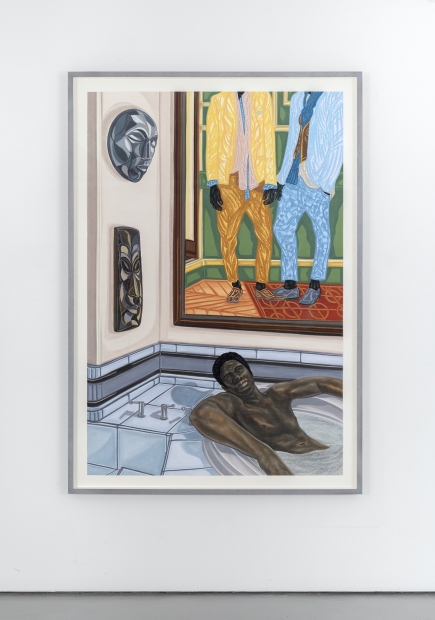 Toyin Ojih Odutola’s drawing practice stages a dynamic interplay between line, form, and color to create sensuous and probing portraits. Working in charcoal, ink, pastel, and pencil, she first gained attention for developing a new approach to constructing figures and rendering black skin through densely interwoven lines, initially working in ballpoint pen. Since 2016 the artist has focused on a series that imagines the private lives of two fictional, aristocratic Nigerian families joined by marriage.

Each drawing from Ojih Odutola’s speculative narrative offers a vignette—most often of a well-dressed individual posed in an elegant domestic setting. Heir Apparent comes from the series’ final installment and features the nephew of Lord Jideofor Emeka and Lord Temitope Omodele, the presumed heir of their joint wealth. The portrait of the young man relaxing in a bath and surrounded by artwork, captures a private moment but speaks to self-possession and privilege. The framed work behind him, picturing two smartly dressed figures, is a direct quotation of an earlier work by Ojih Odutola portraying Lord Emeka and Lord Omodele on their honeymoon. This inclusion creates a kind of family portrait and signals self-fulfilling operations of wealth and inheritance, while also picturing Nigerian nobility through a gay union. The artist’s unfolding narrative, reiterated across five exhibitions since 2016, serves as an important conceptual frame of a black imaginary that transcends the transatlantic slave trade and colonialism. Heir Apparent exemplifies Ojih Odutola’s unique handling of surfaces, skin, and interiors, as well as her inventive narrative conceit of a reimagined Nigeria, whose portrayal challenges those often constructed by and seen in the West.

Heir Apparent brings into the ICA’s collection an emerging artist who belongs to a generation of artists known for reinvigorating figurative painting and drawing through pointed examinations of race and representation. As a major work on paper, it expands the museum’s modest drawing collection, while also sharing themes of family, selfhood, and race with the work of Robert Pruitt, Henry Taylor, and Lorna Simpson.