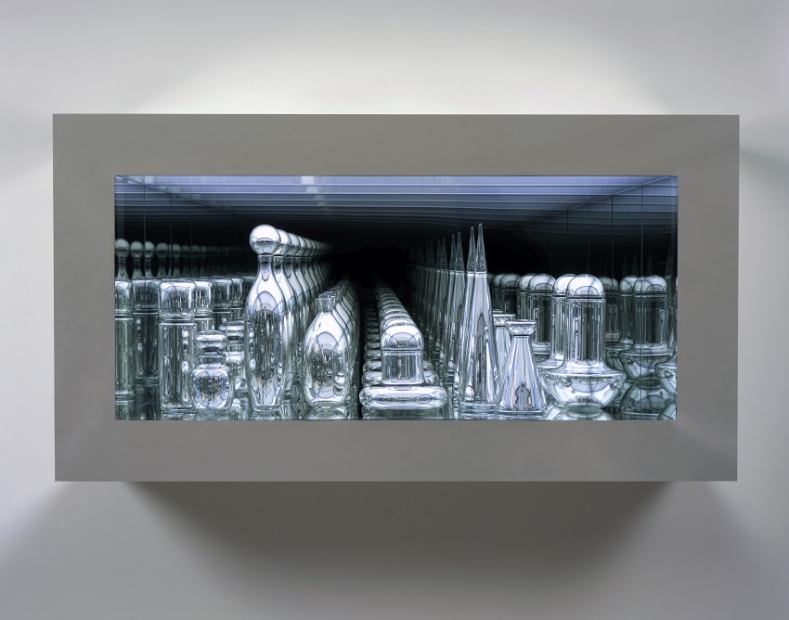 There is something mesmerizing about reflections that emerge between mirrors. As a kid I found they conjured realities where alternate versions of myself existed a la Alice Through the Looking Glass. This wasn’t just the realm of fantasy but also of theoretical physics. In college I was introduced to the concept of multiple infinities. There wasn’t just one infinity but layers that could be mathematically acted upon.

When I include McElheny’s Czech Modernism Mirrored and Reflected Infinitely in tours, visitors describe the display as sumptuous, enticing, lux. The work dazzles with layers of reflections receding into a silvery abyss. While the piece has an allure, I think the artist is going after something sinister; a feeling of objects and desires run amok.

McElheny recreates Czech decanters from the early 20th century and coats them with a reflective surface. They’re hermetically sealed in their own universe with a one-way mirror with no reflection out, creating abstractions as the objects echo off each other. This modernist period is a time where hand-crafted labor is being replaced by mass production. Objects of uniqueness are replaced with sameness. The reflected decanters become an apt metaphor for this shift in labor and consumption of objects, which continues today as goods are treated as easy throw-aways that keep amassing but never disappear.

McElheny draws viewers in with glass and mirrors that often parallel social conflict. In this work I’ve understood he is examining modernist thought about an alternate reality in which we reflect back on objects, thus creating such a world and asking us to enter. A visitor commented that our reality is like that already: not an actual mirrored reflection but one where beliefs are amplified back at us. I think of the Internet and social media, where content has run rampant, misinformed, and sometimes violent. This viewpoint has made me consider McElheney’s lush decanters, and the infinite, with a sense of things gone awry.

Bob Hall has been leading ICA tours since 2013. He works as a program manager for an informatics research program at the VA Healthcare system. While his focus is on big data during the day he likes to explore the right side of his brain with contemporary art, music, film, and theater.