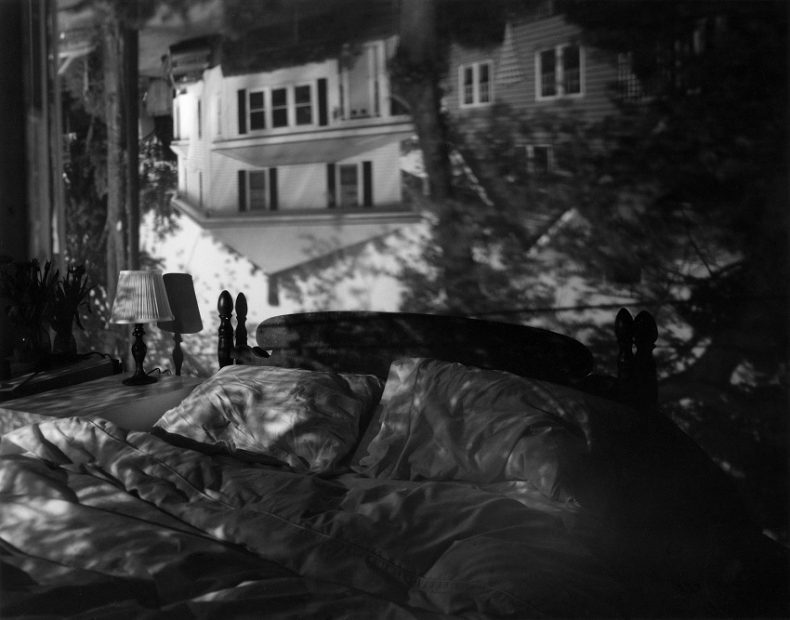 Camera Obscura: Houses Across the Street in Our Bedroom, Quincy, Massachusetts

For the past thirty years, Boston-based Abelardo Morell has pursued a photographic practice that spans intimate black-and-white prints and large color images made by converting rooms into huge camera obscuras. First gaining attention in the 1980s for small-scale portraits of ordinary objects and books made with a large-format camera, Morell is now best-known for the camera obscura pictures, disorienting images of exterior views projected inversely on interior walls. Morell’s diverse photographic practice traces an interest in the everyday, affirming a belief in its aesthetic and communicative forces.

Camera Obscura: Houses Across the Street in Our Bedroom, Quincy, Massachusetts is an early example of what has become Morell’s signature approach. By covering his bedroom windows with black cloth into which he cuts a small hole, Morell creates a camera obscura, an optical technique from ancient times that is often touted as one of the origins of photography. In the final image, the facades of two houses and foliage from trees are cast upside down on the wall above a bed and nightstand. Made the first year Morell began to experiment with the technique, this piece demonstrates the poetic overlapping of public and private, exterior and interior, that would come to distinguish much of his work.

This acquisition introduces the work of an important Boston artist to the ICA/Boston collection and builds on the museum’s holdings of work by such photographers as Philip-Lorca DiCorcia, Nan Goldin, Mark Morrisroe, and Shellburne Thurber. Morell’s work also enriches an emerging thematic strength in the collection—the home as a site of artistic production—as evidenced by recently acquired works by LaToya Ruby Frazier and Diane Simpson.

Gift of Les and Sandy Nanberg