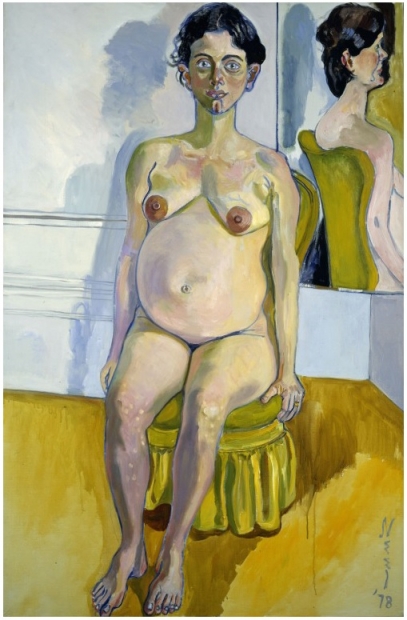 Born in 1900, Alice Neel reacted against the traditional expectations of gender in her turn-of-the-century upbringing. She is perhaps best known for her bold, unsentimental, yet empathetic portraits of the people in her social circle during a period of diminishing interest in figurative painting––the late 1960s and early ’70s. Employing humor and insight to create portraits that are both tender and unromanticizing, Neel carved out a space for feminist engagement with a genre whose history is often defined by the male gaze.

Between 1964 and 1978, Neel painted a series of seven pregnant nudes, a subject previously avoided in Western art. When asked about the subject, Neel responded: “People out of false modesty, or being sissies, never showed it, but it’s a basic fact of life… . Something the primitives did, but modern painters have shied away from because women were always done as sex objects. A pregnant woman has a claim staked out; she is not for sale.” Margaret Evans Pregnant depicts the wife of artist John Evans sitting uncomfortably on a small stool. Her figure, altered by pregnancy, is further distorted in the mirror behind her. Neel’s portrayal of Evans captures the transformative experience and physical demands of childbearing. It reorients the eroticism of the female nude, asserting the female body as a site of multiple, even conflicting, accounts of sexual identity.

This portrait buoys the ICA/Boston’s holdings by female painters engaged in expressive figuration, including Marlene Dumas, Dana Schutz, Amy Sillman, and Lisa Yuskavage. Together with Neel’s Vera Beckerhoff, 1972, and other works of the period by such artists as Louise Bourgeois, Eva Hesse, Ana Mendieta, Ree Morton, Faith Ringgold, and Cindy Sherman, Margaret Evans Pregnant adds to a robust account of art history’s intersections with second-wave feminism. 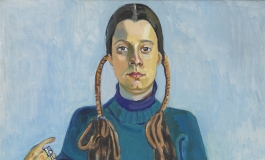