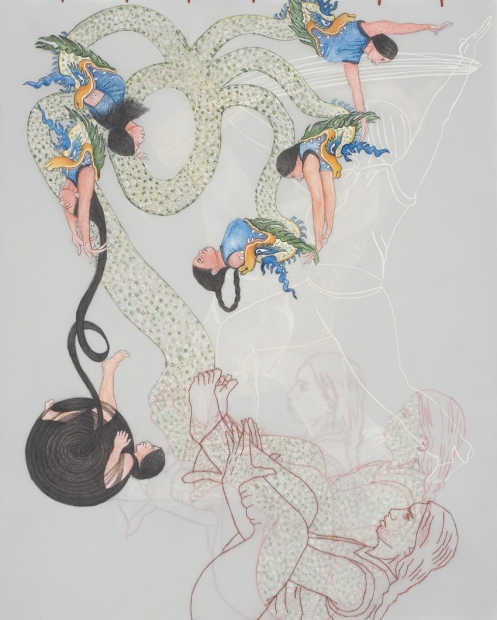 Ambreen Butt combines aspects of Persian and Mogul miniature painting with contemporary imagery, techniques, and subjects. In her series Cirque du Monde, she continues to explore the metaphors of constraint that inform her earlier series Bed of My Own Making. The protagonist is now a blue-shirted avatar of Butt herself, whose figure multiplies and acrobatically stretches to form arabesques.

In Multiplicité (AB95), iterations of our heroine emerge from the mouths of a five-headed dragon, her arms in motion, her expression resolute. A spool of hair spiraling around the body of one figure is formed of her own tresses joining those of another. At the lower right, the green and white dots of the dragon’s scales cover our cloned heroine’s skin, blurring the distinction between her and the hydra: did the monster beget her, or vice versa? Butt creates further ambiguity at a formal level, borrowing from Persian painting both the demon figure and the technique of stitching, while deconstructing their traditional use. Here, rather than binding together pages, thread has entered the drawing itself, outlining the contours of the female figure from which the image of the dragon emerges. Inspired by wasli, the traditional method of laminating sheets to create a single strong surface on which to paint, Butt’s sewn pages create an illusion of spatial depth and phased passage of time while maintaining the thinness of the page.

Exemplary of the innovative practice that earned Butt recognition as the first recipient of the ICA Artist Prize (now the James and Audrey Foster Prize) in 1999, this work makes a significant addition to paintings in the ICA/Boston collection by such female artists as Laylah Ali, Marlene Dumas, and Lucy McKenzie who imbue figuration with conceptual rigor. 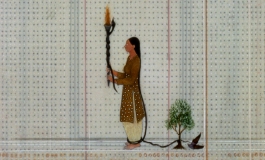 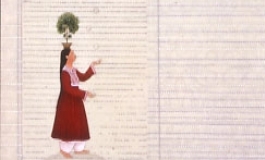