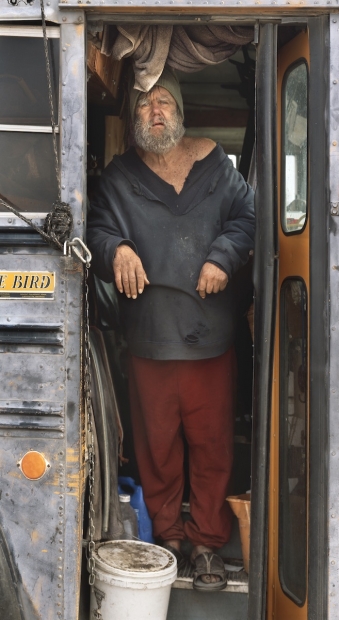 Anthony Hernandez’s subtle yet charged photographs focus on social issues, urban dwellings, and individuals living at the margins of society. His subjects directly confront the camera’s gaze, often seeming slightly disturbed by its—or our—presence. After graduating from East Los Angeles College, Hernandez served as a medic in the United States Army during the Vietnam War and began photographing in the 1970s. While his early works depicting urban environments were shot in black and white, Hernandez later shifted to color photography in the 1980s.

Discarded #5, Near Brawley, California is part of a more recent series consisting of thirty large-scale color photographs that investigates how Americans discard what they no longer need or value, including buildings, memories, and people. Hernandez took these photographs in the east and northeast regions around Los Angeles from 2012 to 2015. Here, he captures the aftermath of a postrecession California represented by abandoned real estate, deserted valleys, and, in the case of Discarded #5, an elderly man living in a bus. “Some people ask, ‘What’s so important or compelling about taking pictures of such unpleasant subjects like city dwellers?’… My work may be beautiful or it might not be, that just isn’t what I am concerned with. I try to be open and face the city… . To me it’s not unpleasant or unbeautiful, it’s just life—which has to be threatening sometimes if it is going to be interesting,” says the artist.