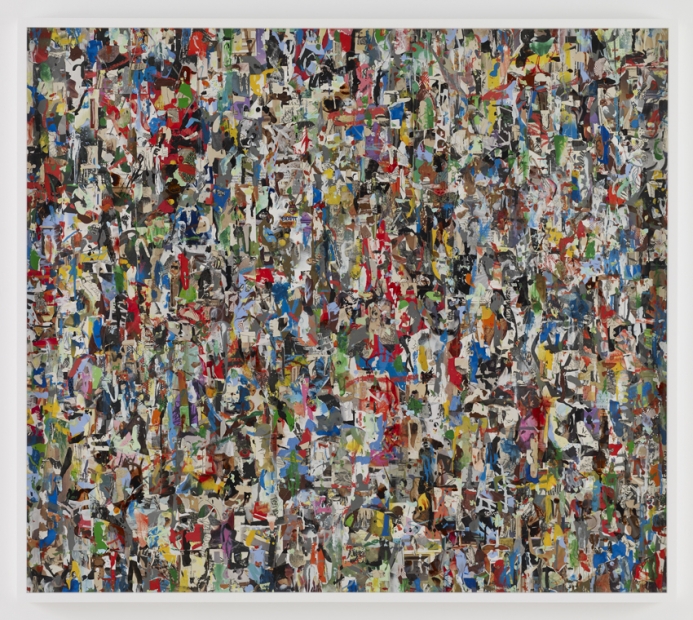 Arturo Herrera works in sculpture, wall painting, collage, photography, and video. He is known for collage works that intertwine found images of Disney cartoon characters and abstract shapes. Through the fragmentation and recontextualization of familiar childhood images, Herrera evokes collective memories, often calling into question the innocence of such memories. In the artist’s words: “I believe the tension within constructed images reflects an essential tension inherent in life, where reconciling the familiar and the unknown is a continual, though generally unconscious, process. For this reason animated films and illustrations have been a rich source for my work. Their stylized, graphic qualities communicate the familiar in an effortless and immediate way that can also be pushed quickly into abstraction through fragmentation and dislocation.”

In the large collage Hasen, Herrera has composed an expansive, abstract field from cut paper and brightly colored paint. Moving beyond his more recognizable cartoon images, Herrera here works with a multitude of references, from magazines and newspapers to cartoons and coloring books. Alternating between legibility and abstraction, Herrera’s juxtaposition of the cutout and painted elements generates an unusual sense of wholeness—an allover field.

Celebrated for his reuse of mass-produced imagery, Herrera has stretched the means and methods of appropriation in his ambitious collages, paintings, and architecturally scaled installations. The acquisition of Hasen furthers critically important conversations around the history of appropriation and the relationships between painting and abstraction as explored in works by such artists as Kai Althoff, Dr. Lakra, and Thomas Hirschhorn in the ICA/Boston collection.