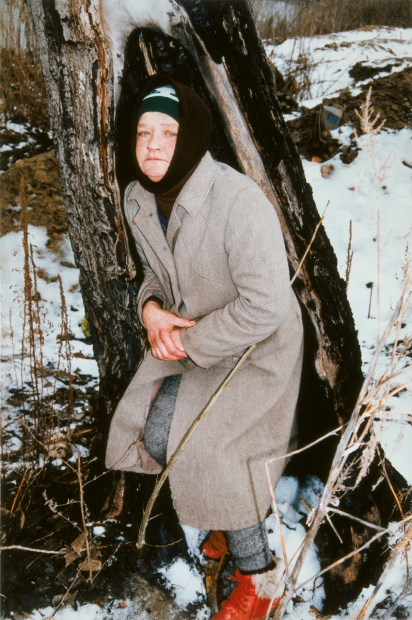 Untitled, from the series Case History

Boris Mikhailov has been called “the former Soviet Union’s most influential living photographer,” yet it has only been in the past decade—since the fall of the USSR—that his work has been widely exhibited in either the East or the West. Mikhailov’s exhibition at the ICA/Boston in 2004 was the artist’s first retrospective in the United States. His career has run parallel to the height, decline, and fall of the Soviet Union and its aftermath. Over the past forty years, he has produced an exceptional body of work that bears witness to these tumultuous times.

Mikhailov’s Case History series documents the homeless community that has appeared since the end of Communism in the Ukrainian city of Kharkov. In the late 1990s, he began photographing the so-called bomzhes, approaching them with his wife, Vita, and asking if he could take their photograph. The subjects, with tattered clothing and ailing bodies, bluntly reflect the economic deterioration of the post-Soviet era. Here, an older woman who appears in several photographs from the series crouches in a somewhat awkward pose in front of a tree. She looks cold in this wintry scene; her clothes are layered and threadbare, her gloveless hands clasped. In printing the image at almost life-size, Mikhailov confronts the viewer with his subject’s grim reality. Even so, her piercing blue eyes look straight ahead with a steady, sure gaze, never fully revealing what must be her daily struggles. Mikhailov’s Case History photographs expose a reality that most do not see or would rather ignore; they archive a community and a reality that would otherwise be erased, like so much of the suffering during the Soviet era.

Untitled is one of two works from this series in the ICA/Boston’s collection, and it joins the museum’s strong holdings of contemporary photography by such figures as Rineke Dijkstra and Nan Goldin.