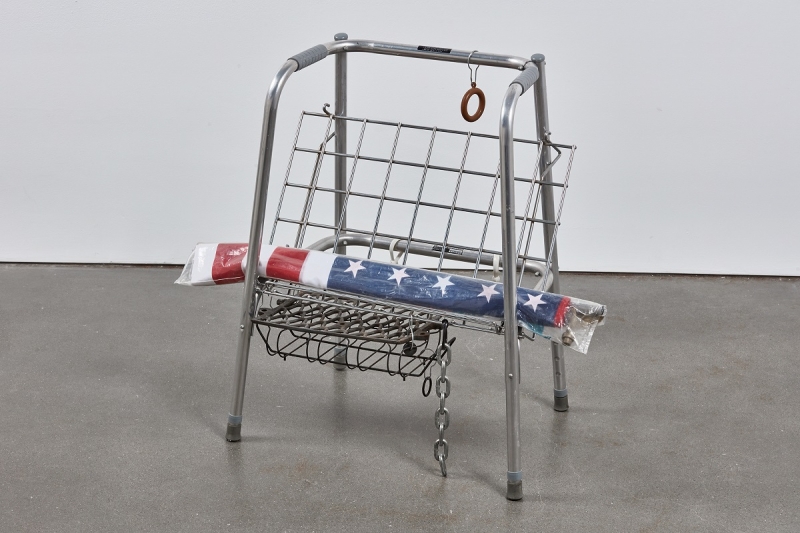 Cady Noland emerged on the art scene in New York in the 1980s, and is now among the leading voices of her generation. Drawing from mass media images such as press photographs of Lee Harvey Oswald and Patty Hearst and found objects from the urban landscape such as beer cans, American flags, and police barricades, Noland’s collages, sculptures, and mixed-media installations examine the underbelly of the American psyche, specifically the fascination with celebrity and violence.

Noland is perhaps best known for her sculptural assemblages of the later 1980s and ’90s that incorporate detritus from American consumer and vernacular culture. A leading example of this vein, Objectification Process deftly explores the American psyche through its most potent symbol of national unity and pageantry—the flag. The motif populates a number of her works from this period, but rather than hoisted high and unfurled, Noland’s flag is often draped or hung, limp or pierced. Objectification Process features a rolled-up flag placed on an orthopedic walker, suggesting a deflated, ailing, or immobilized nation. Noland’s incorporation of walkers, canes, police barricades, and fences conveys narratives of containment, confinement, and violence. The juxtaposed elements in Objectification Process create a powerful critique of the state of American nationalism and identity, a topic that still resonates deeply three decades later.

Although Noland has largely withdrawn from the art world, she continues to have a vital influence on younger artists working in sculpture and collage, including Ellen Gallagher and Rachel Harrison, both represented in the ICA/Boston collection. Noland’s provocative exploration of the more nefarious aspects of American culture paved the way for a generation of artists who also use methods of appropriation in their critique of culture, including Anne Collier, Leslie Hewitt, and Lorna Simpson. Objectification Process joins Noland’s screenprint Untitled, 1989, creating a varied representation of this important artist in the ICA’s collection.

Promised gift of Barbara Lee, The Barbara Lee Collection of Art by Women 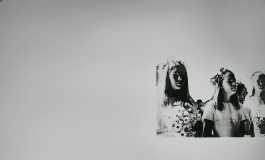