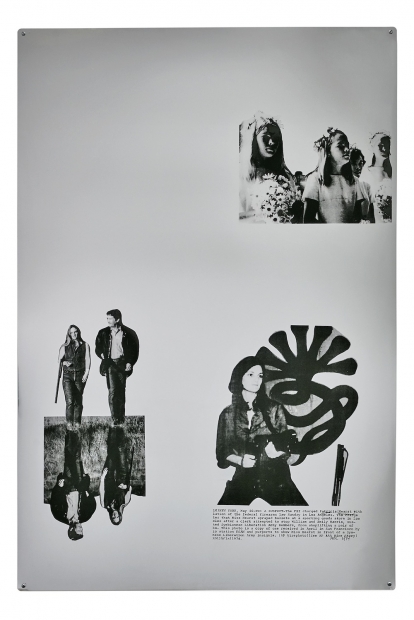 Cady Noland’s work engages the iconography of what could be described as the American underbelly. She draws inspiration from mass-media images, particularly advertisements, pairing them with a sculptural practice that repurposes the detritus of a uniquely American commercial landscape. Noland’s stark and provocative body of work questions America’s self-image as a place of unity, justice, and democratic freedom. Her work is often compared with that of artists such as Robert Gober, David Hammonds, Mike Kelley, and Richard Prince, all of whom are interested in the American psyche and its fascination with celebrity, violence, and wealth.

In Untitled, Noland silkscreens on an aluminum panel three dramatically contrasting images of femininity appropriated from the mass media. In the upper right is a group of young women adorned with flowers; at the lower left, a doubled and mirrored image of a shotgun-wielding couple walking astride; and at the lower right, the infamous newspaper heiress-turned-guerilla Patty Hearst posed, rifle in hand, in front of the seven-headed-cobra symbol of her “captors,” the Symbionese Liberation Army (SLA). The three images Noland juxtaposes offer three distinct constructions of identity formulated in relation to circulated images of idealized feminine subjectivity: the chastity and virtue of the young girls, the conservative domesticity of the couple, and the fallen antihero embodied by Patti Hearst’s transformation from debutante to revolutionary. The polished aluminum onto which the images have been silkscreened reflects the viewers’ presence, transposing their own image into this triumvirate of female archetypes.

Noland’s provocative exploration of the more nefarious aspects of American culture, and more specifically her unique approach to mass-media images and repurposing of vernacular objects, paved the way for a generation of artists who also use these methods in their pointed critique. 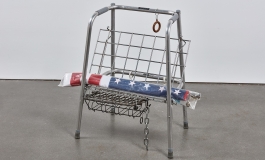