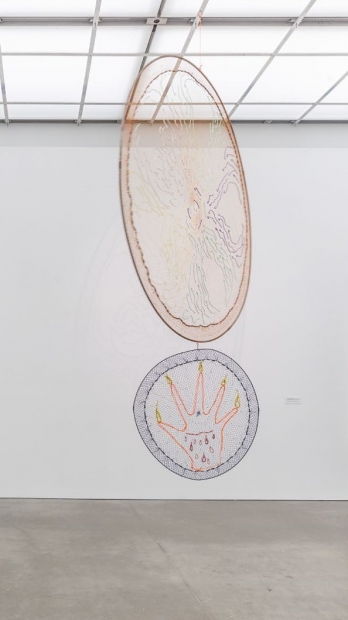 Los Angeles-based artist Carolina Caycedo’s interdisciplinary work questions the nature of asymmetrical power relations, dispossession, the extraction of resources, and environmental justice. Begun in 2012, Be Dammed is a series that examines the wide-reaching impacts of dams built along waterways, particularly those in Latin American countries such as Brazil or Colombia (where Caycedo was raised and frequently returns). Be Dammed takes several forms—sourced from the workshops and collective actions that she refers to as “geochoreographies,” to installations of sculpture, video, or handmade books—many of which incorporate Indigenous forms of knowledge.

One component of Be Dammed is a series of hanging sculptures titled Cosmotarrayas that are assembled with handmade fishing nets and other objects collected during the artist’s field research in different riverine communities. “Cosmotarraya” combines the words “cosmos” and “atarraya” (Spanish for casting net to form a compound that conveys the centrality of the net in the life of those who fish. Each Cosmotarraya is linked to specific people, rivers, traditions, and cultures. Likewise, each net is made to the thickness of an individual fisherperson’s fingers. The material qualities of the fishing net—they are porous, malleable, handmade, and embody ancestral knowledge—offer a potent counterpoint to the brute-force infrastructure of dams, which dispossess people of their homes, threaten their way of life, and disrupt the natural flow of waterways.

For Currents, Fire and Blood, one component of the Cosmotarrayas series, Caycedo combined two nets to make a single, large-scale work. The two colorful nets each function as a canvas for Caycedo’s embroidery. One net is illustrated with symbols used in cartography to depict water currents, and the other depicts a hand with drops of blood on its palm and flames coming from its fingertips. Through this evocative symbolism, the artist considers Currents, Fire and Blood “a call to action” in the struggle for environmental justice. Like other of the Cosmotarrayas, Currents, Fire and Blood embodies the continued resistance to corporations and governments seeking to control the flow of water and works to create visual narratives that counter the supposed neutrality of dams. 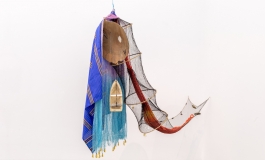