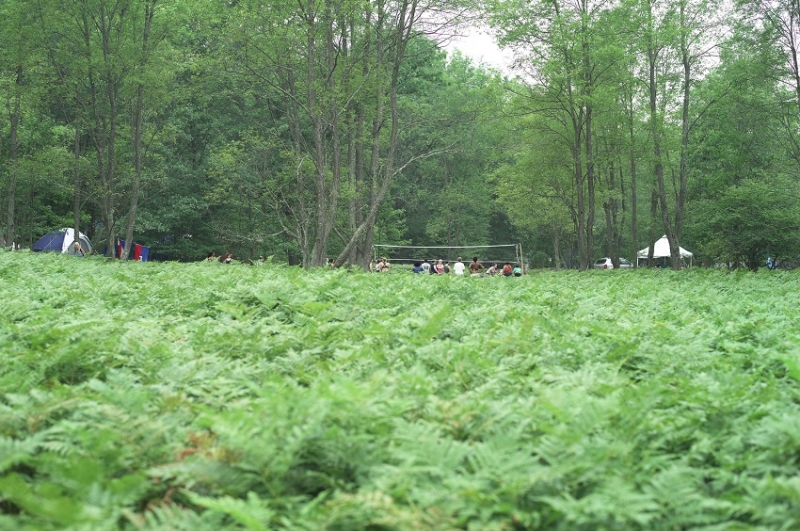 One of the defining artists of her generation, Catherine Opie is known for her photographic portraits and landscapes. She frequently combines the two genres by training her camera on people within their environments—from Boy Scouts at their campgrounds to ice fishermen on frozen lakes and surfers waiting for the next wave. Drawing on the tradition of American landscape painting and of social documentary photography by artists like Dorothea Lange and Walker Evans, Opie gives us a view of democracy in action. Her photographs explore the intimate relations between community and politics, citizens and the landscape, offering a dynamic, open, and complex portrait of the United States at the beginning of the twenty-first century.

Untitled #1 (Michigan Womyn’s Music Festival) documents a six-day international festival that occurs every August outside Hart, Michigan. Drawing nearly 10,000 visitors annually, the event is built, staffed, and run entirely by women for women (referred to as “womyn” to avoid overtones of patriarchy) of all age groups, ethnic backgrounds, and abilities. The festival was founded in 1976 by Mary Kindig, Kristie Vogel, and Lisa Vogel in response to the misogyny they experienced working at festivals and music venues run by men. Through a sea of tents, bodies, and trees, Opie presents a collective identity that has come to represent an idyllic version of female solidarity, diversity, and community.

Following the 2011 exhibition at the ICA/Boston Catherine Opie: Empty and Full, the artist donated Untitled #1 (Michigan Womyn’s Music Festival) to the museum. The addition of this work augments the ICA’s focus on work by women artists and its strong holdings of photography by such leading artists as Rineke Dijkstra, Lorna Simpson, and Sara VanDerBeek.