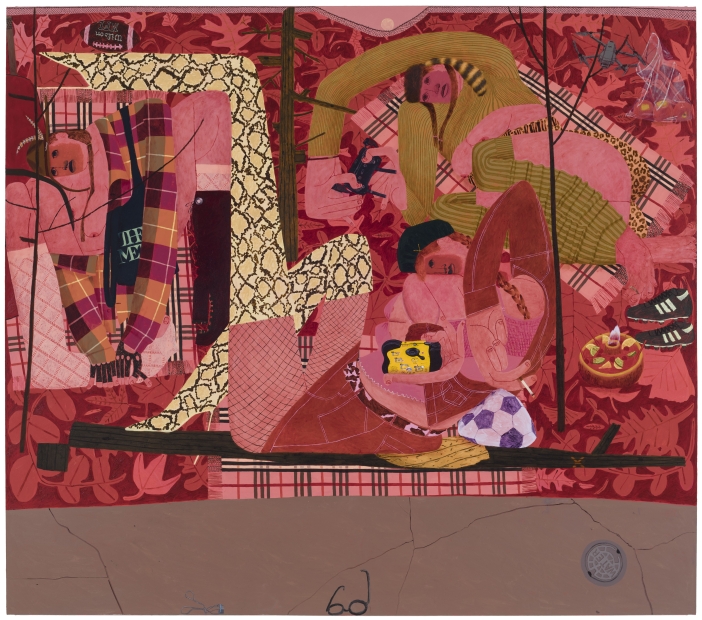 Celeste Rapone is a Chicago-based, abstract figurative painter known for depicting her subjects (who are often women, and usually the artist herself), in outlandish, impossible, and even humorous compositions. Her style exceeds the traditional expectations and perspectival grounds of the canvas, drawing attention to the dynamic movements, colors, and details layered into her paintings. The artist relates her compositional choices to sub-narratives about anxiety, vulnerability, and freedom, especially in the lives of women: “There’s something about the idea of the women contained, occupying these impossible positions anatomically, but also in terms of expectations, ambition, defeat, and self-awareness.”

Rapone began Pack Animals with a specific color: the bright, rose pink that was her grandmother’s favorite color. From there, the artist drew from memories and individual experiences, working out the composition, patterns, and figures on the canvas without preparatory drawings. In this work, three nearly identical female-presenting figures—who appear to be wearing the same masked expression and hairstyle—gather on matching plaid blankets on a brilliant autumn day, a time of year the artist associates with the start of school and new beginnings. The three figures stretch and twist their bodies beyond realistic proportions and standard perspectives to give the painting a distinctive composition and sense of humor. The painting is populated with a remarkable range of objects (such as a football, a tote bag from the Metropolitan Museum of Art in New York, a drone in flight, crocodile skin patterned boots, a pair of cleats, and a deflated soccer ball), which serve to inform viewers about Rapone’s subjects and her picnic scene. The individual attire and styling of each figure is cast against a fascination with fashion and trends. In both form and content, the painting displays the drama between the individual and group, or pack, as in the title. While the figures appear individually consumed in their own activities, they almost interlock with one another and the surrounding scene, which makes discerning their individual forms visually challenging. 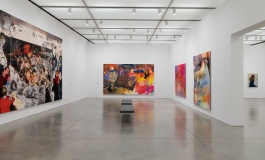 A Place for Me: Figurative Painting Now