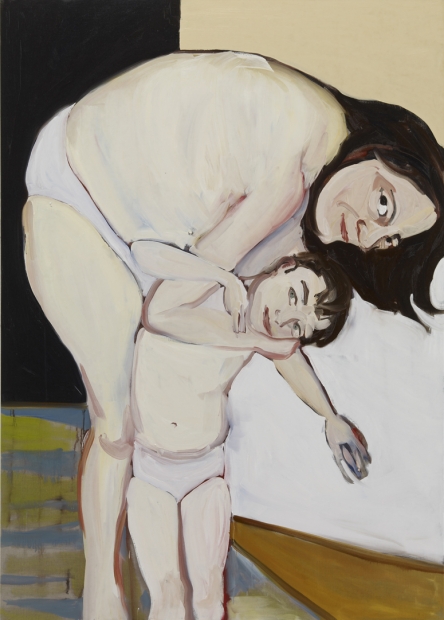 The figurative works of Chantal Joffe reveal the artist’s keen observation of everyday life and her active engagement with the medium of painting. Often large in scale and boldly colored, her paintings depict female figures in a wide range of poses and couplings. Joffe culls her subjects from photographs and fashion magazines, isolating and intensifying aspects of the images—from the textures of the clothing and details of the accessories to the poses of the models—through the process of painting. Constructed with blocks of brilliant color in thick, wet paint and quick strokes, her paintings appear both carefully composed and rapidly executed, exuding the immediacy of daily life.

Self-Portrait with Esme combines two staples in Joffe’s production: the self-portrait and the subject of mother and child. In this painting, a mother leans over and tightly embraces a small child. The two bodies—dressed identically in simple white underwear and painted in the same pink-tinged cream—appear to become one, an effect deepened by the strong outline around the figures posed against an indistinct background. The focus is on the intimacy of this quotidian scene, an intimacy conveyed not only through the subject matter but also through the proximity and visual unity of the two bodies in space.

Self-Portrait with Esme contributes to the ICA/Boston’s strong collection of portraits of women by women, including important examples by Marlene Dumas, Alice Neel, Dana Schutz, and Lisa Yuskavage, and extends an inquiry into the subjectivity of identity by artists such as LaToya Ruby Frazier and Cindy Sherman. Joffe’s major painting also corresponds with the ICA’s collection of Nan Goldin photographs, which Joffe has frequently cited as a major inspiration for her work.

Gift of Adam Sheffer in honor of Betsy Livingston Sheffer