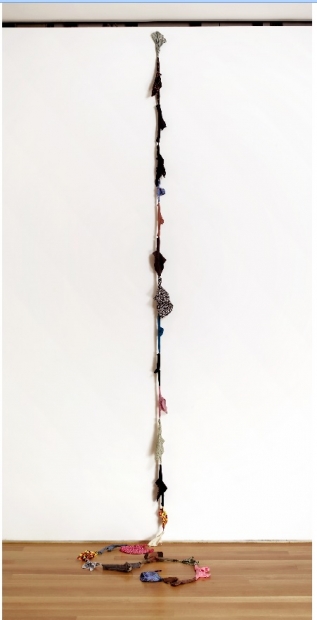 Charles LeDray has produced an extensive body of work in diverse sculptural materials, from large textiles and miniature ceramics to carved bone and intricate wire-based forms. Narrative, familiarity, and cultural history are powerful forces in LeDray’s sculptural work, which also touches on issues of work, manual labor, and gender roles. After his arrival to New York in the 1980s, his work began responding to the HIV/AIDS crisis, most notably using dismembered teddy bears to create sculptures that addressed the socio-political climate of the pandemic and its disproportionate effect on the LGBTQI+ community.

As an artist, LeDray is best known for his work in textiles and his skillful stitching. He learned to sew at a very young age from his mother and became self-taught in various craft mediums, from ceramics to dressmaking. Through a painstaking process completed entirely by hand, LeDray assembles hundreds of individual components into new formal sculptures that appear as seemingly familiar objects, such as men’s suits or miniature toys. Reconfigured through craft-based techniques of sewing, sculpting, and carving, LeDray’s sculptures bear both a sense of the familiar and the alienation of the unknown, the unexpected, and even the uncomfortable, for how his works push their material capacity to new associations.

For LeDray, clothing is bound up with the history of identity, gender, and expression. Clothesline is an example of this interest through the layered symbolism of a stretched, hanging sculptural work suspended from the ceiling to coil on the floor. In this work, LeDray uses everyday objects and the intimacy of hand-stitched cloth. These doll-sized clothes hang from the ceiling in a striking downward line that pools into a swirling form on the floor of the gallery, though one might also expect that that stitched fabric threads are ascending upwards as much as they descend. With its miniature scale, realistic detail, and poetic reflections on individuality and collectivity, Clothesline demonstrates LeDray’s unique skill in reconfiguring expectation and exciting wonder in the everyday.